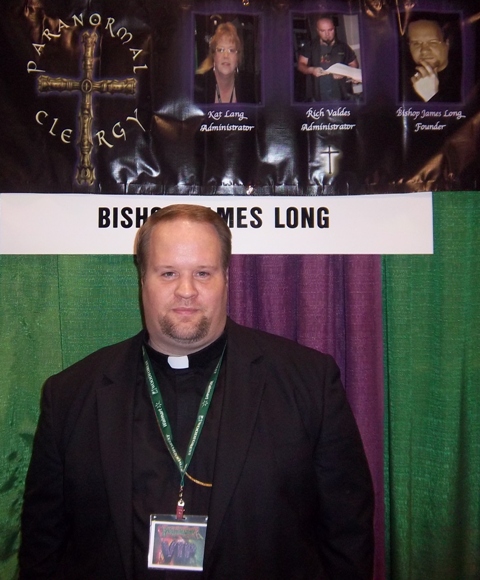 Recently, at ScareFest, the horror and paranormal convention based in Lexington, KY, Bishop James Long was definitely in demand. Founder of The Paranormal Clergy, which he started about 14 years ago, Bishop James Long’s mission has always been to help people in need. His panel, in which discussed his experiences battling evil and performing exorcisms, overflowed out of a small meeting room and was moved into the largest auditorium in the entire convention center. Everyone wanted to hear what he had to say and it was a great speech. Attending ScareFest for the second time, Bishop James Long discusses demons, helping people and performing exorcisms.

How long have you been a bishop?
– “I was consecrated in 2006. I studied for the Roman Catholic priesthood for six years and then I joined the independent Old Catholic movement. I was ordained a deacon and a priest and consecrated a bishop with the Independent Catholic Church.”

Where are you based?
– “Louisville.”

What are the steps undertaken before performing an exorcism?
– “I was mentored by an exorcist, who was a priest for 15 years. I studied demonology since I was 9 years old. I picked up my first book and I haven’t stopped. When people tell me they have a possession or something of that nature, I forward the case on to Kat Lang or Rich Valdes. They are the administrators for the Paranormal Clergy. They’ll forward the case to an affiliated paranormal group who will go out and investigate the case. If the case warrants my attention, then I get involved. If it’s a demonic infestation, that’s one thing. But if you’re talking about a demonic possession, that’s a whole, new story.” 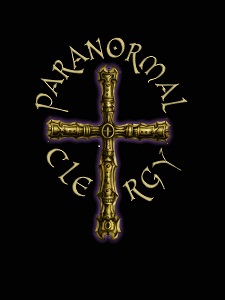 “I force the entity to manifest itself, so I bless every single room and I go to the last room, and that is where the ultimate clash is. It’s real important for the exorcist to understand why there was an infestation, in the first place. Once we find out why, then we can move forward, because I can perform 1,000 exorcisms on a home, but if they go right back to what they were doing, it’s going to be wasting my time.”

“Now, if you’re talking about an exorcism, that’s called a solemn rite. When someone claims they are possessed, we absolutely have to rule out any type of medical condition that might cause these symptoms, because people can construe many forms of schizophrenia as demonic-entity attachment. We require a psychological evaluation by a licensed psychiatrist. I have to have, not only that, but their medical background of everything they’re taking. Once that has been taken in and then based upon our investigation, then we move forward, if we determined we have a possession.”

“Understand when talking about possession, a mentally-ill person cannot levitate. A mentally-ill person does not know deceased or dead languages, like Aramaic. A person who is mentally ill cannot mimic the voice of deceased loved ones. There are ways an exorcist can easily determine whether or not you’re dealing with a mentally illness or a true possession. Once all that’s done, then an exorcist will determine if you’re dealing with transient possession (when a demonic entity enters the body and leaves at will) or full possession (when a person has no relief from a demonic entity — that’s dangerous).”

“The possibility of the person expiring is very high, primarily, because the demonic entity will not allow the substance of life to enter the body. The No. 1 cause of death for people who are possessed is malnutrition or dehydration. They just can’t sustain any form of life. That’s why you have to have medical personnel with you, monitoring their vitals.”

How many exorcisms have you performed?
– “I’ve done 27 of them. I remember every one of them. They’re all bizarre. I guess there are some things people shouldn’t see.” 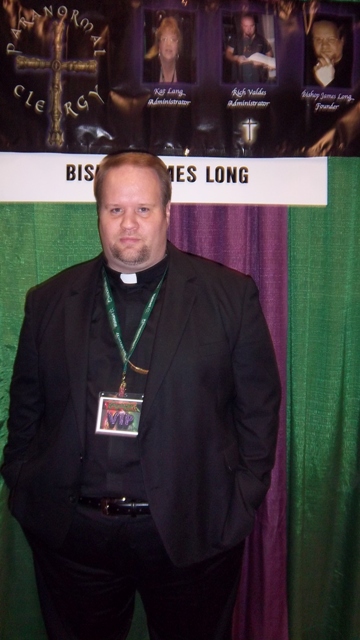 You’ve worked on the TV show Ghost Adventures…
– “I’ve worked on several episodes of Ghost Adventures, with the guys. I know Zak (Bagans) well. I consider him a good friend. I’ve done that, American Haunting and National Geographic documentaries… The whole purpose of doing all of that stuff — because I’ve never been paid — is to let people know about The Paranormal Clergy. It’s important for me to let people know that they’re not alone. It’s important for me to let people know they’re not crazy, that there is clergy there, who will listen.”

Do you think some of the TV paranormal investigators unnecessarily provoke spirits for ratings?
– “I think there’s a stress, in television, that you have to show something. Sometimes, people think by provoking, that you’re going to get that type of response from a demonic entity. You can provoke all you want to… a demon doesn’t dance for a dollar. A demon is looking at you, saying, ‘I’ll come and get you… just in my time. When your wife leaves you, when your husband leaves you, when your partner leaves you, when you lose your job, when you lose your car, when you are depressed, when you are sitting there by yourself and you have low self-esteem, that’s when I’ll show up.’ I’ve been saying this for 10 years now: Demonic entities provoke back and they don’t stop.”

What are your thoughts about Ouija boards?
– “What’s the whole intent of an Ouija board? To make contact with the deceased. OK, fine, once you make contact, who are you making contact with? Some entity. You don’t know if it’s human, you don’t know if it’s demonic, you don’t know anything. All you know is it’s some spirit. Now you made contact. What do you do if it’s evil? People say they can filter out the good and evil. No, you can’t. I always tell people, ‘I know a great patent attorney.’ Anybody who says they can filter out the good and the evil needs to come talk to me. We’ll patent that sucker. We will be very wealthy. It doesn’t exist. We tell children all the time not to talk to strangers. Paranormal investigators do it all the time, unfortunately with very serious consequences.”

Has anything ever followed you home?
– “A demonic entity will attack in every possible way. I have two dogs, two very spoiled-rotten schnauzers. There are many times that my dogs will hear noises and I will wake up and hear someone screaming outside my window. That happens all the time. We are working priests. Our job pays for our ministry, because I don’t get paid for this. I had a phenomenal job interview and I went down to my car and all four tires were flat. Every single one of those tires were slashed where the tire meets the pavement. That kind of stuff happens all the time.”

Will you be appearing at any future conventions or live events?
– “I really don’t do a whole lot of traveling. ScareFest is local. I prefer that because I’m really busy with the ministry. Ministry is my passion: Helping people who’ve been ostracized from the church, people who have been told they’re no good or not welcome to the church for a variety of reasons. I’m an advocate for anybody who’s been ostracized, because there’s too many people who are ostracized, whether it be marital status, sexual orientation, age, whatever they’ve done in the past or whatever they’ve done currently. My passion is to welcome everybody.”