Doctor Sleep Awakens the Ghosts of Stephen King’s Past 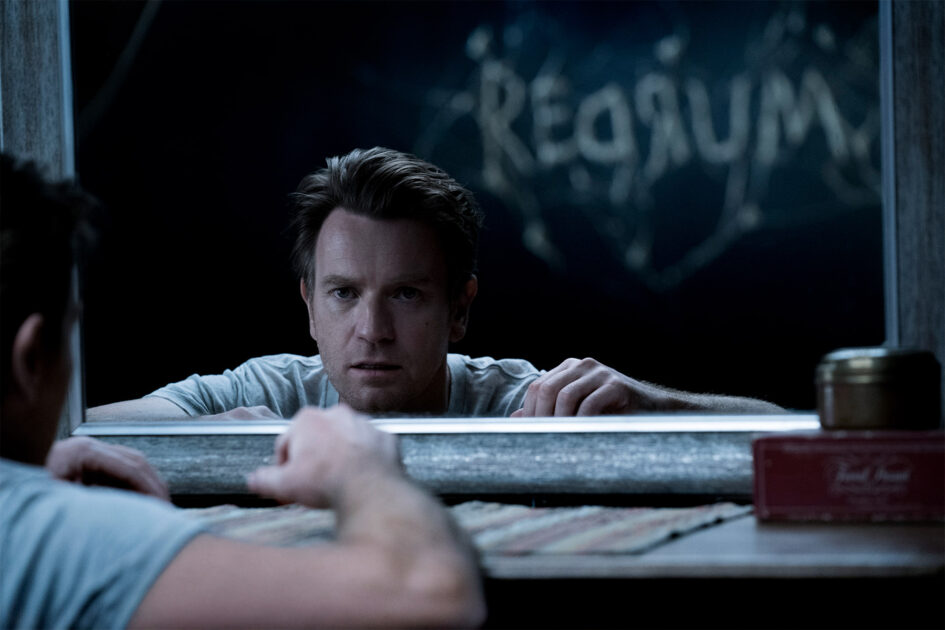 Danny Torrance (Ewan McGregor) must face the demons of his past in Stephen King's Sleep Doctor. Photo Courtesy: Warner Bros.

Per Matt
Stephen King and Halloween go hand in hand, but here it is, early November, and another adaptation of a King novel hits the big screen in hopes of continuing the spooky spirit for a little bit longer.

Doctor Sleep toes the tricky line of being a sequel to BOTH the original novel, The Shining, AND the adapted movie — both of which end with different outcomes (employing a similar storyline strategy as the EPIX series, Get Shorty). Writer/Director Mike Flannigan gives a lot of reverence to the original source material while exploring the tortured life of Danny Torrance, who survived his stay at the Overlook Hotel, outlived his parents’ deaths and has been haunted for many years by the very same evil entities that tortured his family during his stay at that Rocky Mountain getaway.

Now older and somewhat wiser, Dan (heroically played by Ewan McGregor) seems to be following the same footsteps as his father, as he dulls the pain with drug and alcohol abuse. A stranger (Cliff Curtis, former star of Fear The Walking Dead) helps him rebuild his life in a small New Hampshire town, when his long-dormant psychic abilities reawaken and he makes a connection with a young girl. Much more powerful than Dan, Abra Stone has the ability of astral projection and may have the most powerful shine known to man… which makes her a target of The True Knot, a cult of immortals led by Rose The Hat, who feed on the shine of others. All of this eventually leads to a showdown at the Overlook Hotel, naturally.

During this period of Hollywood’s need for a sequel to any remotely popular property, it’s refreshing to see a film that offers a nostalgic and somewhat reverant perspective to its past connection. That being said, Doctor Sleep employs a slow-burn storytelling technique that really could have been improved with a few jumpstarts. It really is low-key Stephen King for the majority of the movie, until the storyline finally arrives at the Overlook Hotel — the true star of the film. This is where there’s more than a few good jump scares.

Doctor Sleep is haunted by the ghosts of movie adaptations past. It’s haunted by all of the ghost hunters of reality TV shows who have visited The Stanley Hotel in real life. It’s even haunted by the ghosts of Kubrick’s past, as King reportedly hated The Shining, as a film. It feels like this is more of a spiritual sequel, of sorts, to the first film. There’s fan service and Easter eggs galore for film buffs, Stephen King book fans and pretty much pop-culture fanatics, in general.

I was really impressed with Cliff Curtis’ acting, as the only comparison I’d previously seen was in Fear, which I didn’t particularly enjoy. Kyleigh Curran has a bright future ahead of her, should she choose to continue acting. And this is the most emotionally vulnerable Ewan McGregor has been since appearing in Trainspotting, many, many years ago. The overall acting is great. That being said, the writing wasn’t the best, as there’s no redeeming factors, whatsoever, regarding Snakebite Andi, Barry the Chunk, Apron Annie, Grampa Flick, Silent Sarey or Crow Daddy. My interest was initially intrigued by Rose The Hat, but she, too, received little to no backstory or motivation to make me care about the character. That’s too bad. I really wanted to like the bad guys.

As a Child of the ’80s, I have a huge pet peeve with mainstream horror movies being released during every month of the year except in October, but after watching Doctor Sleep, I realize it would have been a big mistake. This isn’t a slasher film. In fact, there’s so many horror elements crammed into the final 30 minutes of the movie (that aren’t really present otherwise), it really feels like watching two separate flicks. It’s a little jarring.

Will hardcore King fans pack the movie theaters this weekend, as they did for It? Or will the box office be more akin to Chapter Two? I guess we will find out if it feels like Halloween in November really quickly.