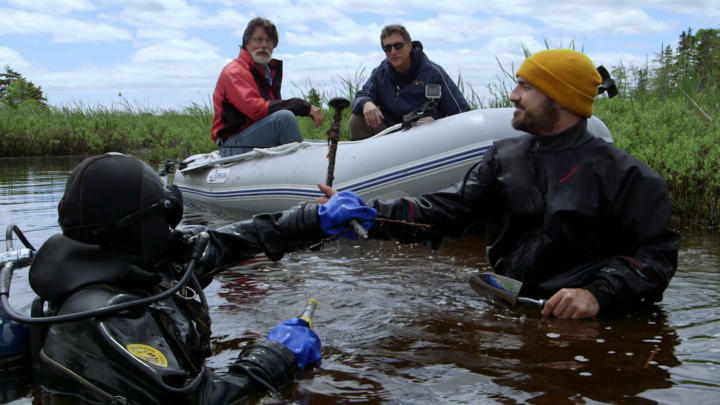 In case you might have been hiding under a rock, for four weeks and endless commercials, the History Channel has really hyped up The Curse of Oak Island‘s Season 7 with multiple recap shows (including Top 25 Finds, The Top 25 Theories, The Top 25 Moments and The Top 25 Moments You Never Saw) and a Catch-Up Marathon to bring viewers up to date… that is, if you happened to miss Matty Blake’s Digging Deeper companion show. Now that the show is back with brand-new episodes, it’s time to cut to the quick: Will Oak Island finally drain the swamp?

“The Torch is Passed” opens with a look back at past finds. Partial artifacts, unknown symbols, priceless jewels, mysterious fragments of human bones and countless questions answered with more questions lead off the two-hour season premiere, which then transitions to memorialize the passing of Dan Blankenship. His death will loom large for the team, as it will be the first year without his assistance.

Every year begins with anticipation and a new hope. Hope to find the truth about Oak Island’s 224-year old mysterious origins. Hope to search differently and smarter, while uncovering new clues. Hope to find more answers than questions. Each year is the same, with results never really varying. But this is the year all of that changes, right?

Picking up where last season left off, the team continues metal detecting all around Smith’s Cove (with positive results), receives the necessary permits for a 100-square-foot extension of their current cofferdam and investigates the anomalies discovered by seismic data found in the Swamp. The decision to bring in a tactical core drilling operation to get more data on a 200-foot-long object that resembles a large ship is made, so a sectional barge and a drill rig is brought in to explore underneath the brackish water.

In the past, they were unsuccessful at partially draining the swamp, getting waist-deep in pond scum, while locating a few intriguing finds. So, why doesn’t the team decide to drain the swamp before drilling? Now THAT just seems too logical for this group of treasure hunters, which means they’ll do the exact opposite thing… before finally correcting course.

“I thought we eliminated it years ago. It keeps coming back from the dead.”

Marty might have been joking while comparing the Swamp to a monster in a horror movie… but he wasn’t wrong. This show is built on potential, filled with infectious optimism, but the never-ending puzzles have got to be quickly wearing down the patience of these treasure hunters. And if they happen to strike out after spending another million dollars searching the brackish waters? It’ll only reaffirm my previous declaration: There might actually have been a grand treasure hidden on Oak Island, but it was removed years (maybe decades) ago.

An upcoming episode previews a long-missing treasure shaft might actually have been discovered. Will it lead to a buried galleon or somehow wind around to the Money Pit?