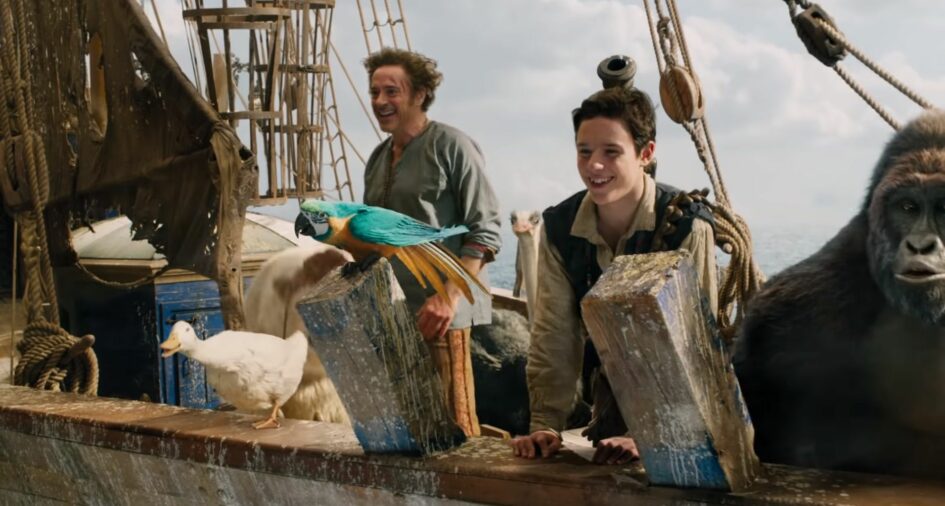 In my younger years, the term “family friendly” was something that pretty much told me “this film is going to be boring.” They were things that I only experienced with my mom and dad out on Sunday trips. If I had my choice and was with my friends, we were totally going to see the films that were anything but “family friendly.” But as time marches on, my thoughts on the genre have changed. And now that I am a dad, I almost exclusively look for them when I have my little one.

2020 looks very promising for families in the same boat as myself. You have My Spy starring Dave Bautista, The Call of the Wild starring Harrison Ford, Onward with Tom Holland and several others, both animated and live action. What else are the Marvel and Star Wars alumni going to do with their spare time, now that their franchises are either over or moving on to a new phase? It looks like they’re getting more families into the theaters.

The first of these family films to release in 2020 is Dolittle. Instead of being a follow-up of the Eddie Murphy Doctor Dolittle series, this film follows the book, The Voyages of Doctor Dolittle, a lot closer. Robert Downey Jr. portrays the aforementioned Dr. John Dolittle, a physician who discovers that he has the ability to talk to animals. As the veterinarian to Queen Victoria, Dolittle has a menagerie of animals to keep him company after the death of his wife and uses their companionship as a coping mechanism, shuttering himself from human relationships as much as he can. In his service to the crown, John finds himself whipped away on a perilous journey to find a cure for the strange illness that threatens the life of the Queen, aided by his animal friends and a young apprentice named Tommy (Harry Collett).

Dolittle is full of adventure, wit and charm. The whole movie has a certain Pirates of the Caribbean feel to it. A large portion of the adventure takes place on the ocean, travelling from land to land, fighting pirates and other assorted bad guys (or bad animals, in some cases), on the search for the rare plant that will save the Queen. With Antonio Banderas supplying the constant threat to his journey as the villainous Rassoulim and his pet tiger Barry (Ralph Fiennes), swashbuckling action permeates much of the film. Obviously using the fight training he received during his days as Iron Man, Downey Jr. also is able to channel the spirit of his other famous portrayal, that of Sherlock Holmes. Much of his dialogue feels like it was pulled directly from those films, complete with the ramblings and thought processes that the good doctor finds himself going through in the film.

With that being said, the film does get rather discombobulated fairly quick. Unlike Pirates of the Caribbean, where the cast was made up of humans, much of the interactions between Dolittle and his world are between him and his animal companions. And this is where the movie struggles. The animal cast includes greats like Rami Malek, John Cena, Octavia Spencer and Emma Thompson, but they create tons of distractions in the film. Instead of providing comic relief and background characters, these animals somehow take over the film many times. There are moments where the actions of Dolittle “do little” to reach the next stage, instead relying on the secondary cast to win the battle or capture the moment entirely. It is important that the main character is the saving grace in films, but director Stephen Gaghan seems to throw that idea out the window early, making the titular character just another member of a team. This diminishes the importance of Dr. Dolittle and hurts the overall quality of the film.

Robert Downey Jr. is an amazing actor, but the writing of his character is woefully underwhelming. Even with all the charm and affection afforded to him by the public for his previous roles, there is only so much an actor can do. The failure of his character being strong and even heroic in this film is squarely placed on the poor work of the writers, Stephen Gaghan and Dan Gregor. While Gaghan was behind the film Syriana, Gregor only has sitcom writing in his past, working as a writer for the hit show How I Met Your Mother. Even with this limited writing experience, you would believe they could write both an action-packed film, complete with great character development. However, it feels like they gave as much time writing the scene for Dr. Dolittle as they did for the rest of the cast, resulting in a messy film that seems to have no clear main character, despite the fact the film is named for one specific role.

Dolittle tries hard to be funny and action filled, but ends up not truly fulfilling both. Due to this, I give it three out of five stars. With a cast as deep as this one, the movie should have been great. Sadly, it ends up with a clear end-goal, but a very foggy and messy process to try to reach it. With better writing, this film could have been great and epic. However, what we have is a film that fails to find itself.