Now That The NFFA Has a Dirty Backstory, What’s Next For The Purge? 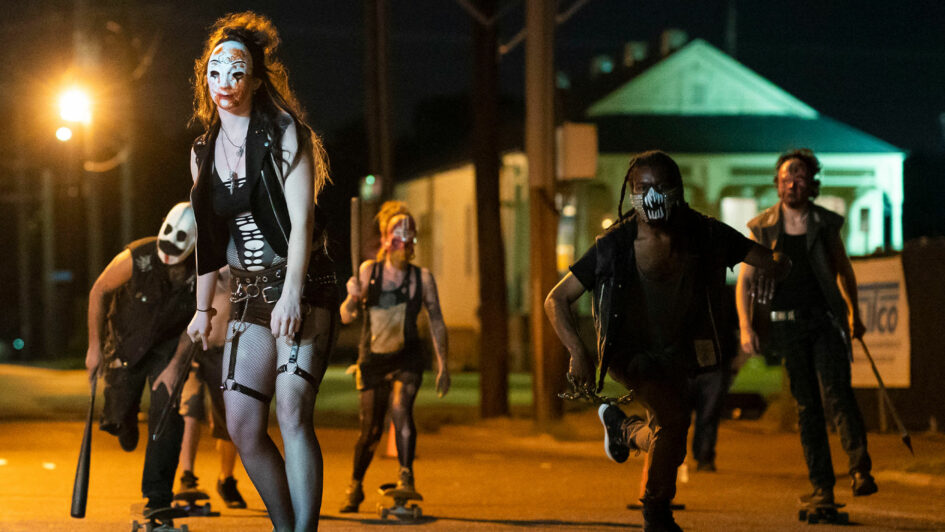 LOOK OUT! Season 3 of The Purge is gonna be GREAT!!!

This is not a test. As a television series, The Purge takes a behind-the-scenes look at Big Brother and explores violence as a deterrant to violence, which ultimately only seems to create serial killers. Sounds more like an deadly, lawless experiment, right?

Airing on USA Network, Season 2 of this TV show begins with Purge Night, spends the majority of the time dealing with the aftermath of everyday life (outside of purging) and the New Founding Fathers of America gets personal, reaching a certain point where everyone is gunning for the main characters, which includes a group of retired New Orleans cops leaving a crooked force, a family fighting a Purge contract placed by their neighbors and an unlikely college kid who somehow becomes the Campus Killer. Then the setting flashes forward to the following Purge Night, where the season wraps. It’s kind of got an overall symmetry, although flashbacks and fast forwards get a little sloppy at times.

The main focus of the series takes place during the supposedly peaceful 364 days of the year, which is the first time that period of time has ever been shown. The government is killing innocent citizens for questioning The Purge. It seems a scientific study proves that purging changes the brain, that it doesn’t take away your anger or fears, but it amplifies them. One such NFFA employee discovers this and switches allegiances, hoping to show these illegal actions taken by the government to a wide-eyed public.

Season 1 of this adapted storyline, taking place within The Purge Universe, seemed to be crafted on a much smaller scale (and strained its limits as a jumbled mess), while the second season really detailed behind-the-scenes actions at the local NFFA surveillance center and integrated these “random” characters’ storylines much easier in a more cohesive unit. Through two seasons, there haven’t been any major crossover storylines or crossover characters, but Ethan Hawke does make a cameo appearance as James Sandin, a cheesy security salesman that’s an instant classic (even if the wig he’s wearing isn’t).

There’s extracurricular activities of an illegal nature, deepfakes for a good cause, violence, trauma, politics and revenge. I found it funny to see a long-running horror trope surface near the season’s conclusion, as a bad guy gets locked into the boarded-up safe house, along with the skittish victims. And who would have thought that forgiveness and peace would play major roles for these characters who have seen such violence?

“Let the citizens restore the balance”

As the season concludes, the public may be finally getting a peek behind the mask (so to speak) of its powerful government leaders and the Campus Killer is loose. So, what’s next for the franchise? Now that some off-Purge moments have been revealed, where will Blumhouse Productions take us next? As of now, little is known about the upcoming fifth and final Untitled Purge Sequel that will be released in July, but I’m hoping it closes out the franchise with a bang. A Big Bang. And somehow, I hope the effects of its conclusion seep into the next season of this series.