Don’t Stop… Till The End 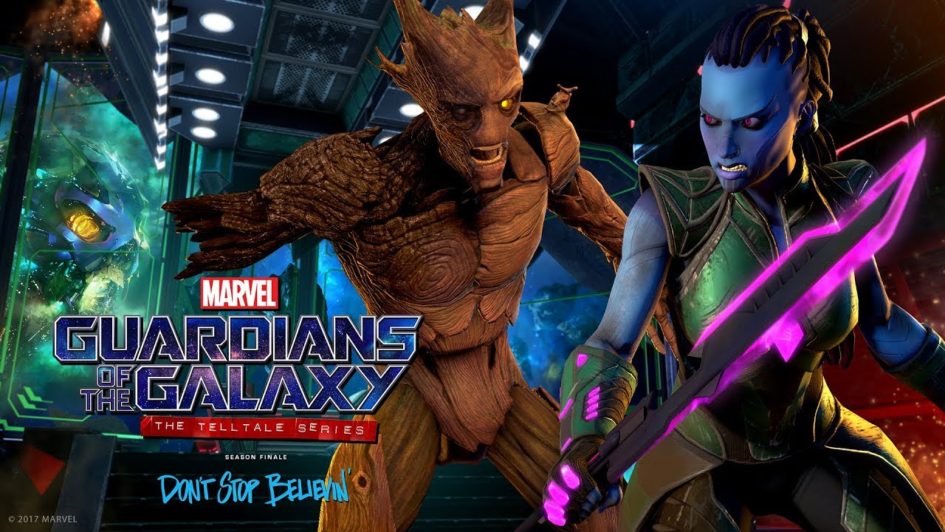 If only Telltale had made all episodes of their Guardians of the Galaxy game as creative, well-paced and engaging as they did Episode 5: Don’t Stop Believin’, this series of reviews would have been less negative. Ultimately, the clunkiness of this game and inconsistent quality can be blamed on nobody but the creators themselves. It is almost like they were learning how to make this game as the episodes progressed, but this is hardly their first rodeo within their system. Regardless, this last installment in the series is much better than its preceding episodes.

We pick up the story in this episode exactly how you might imagine: On a low note, with nowhere to go but up, as we start the process of bringing all the Guardians back to the table for the final throwdown. While it might have been nice to spend a little time managing each Guardian solo, the plot moves pretty swiftly toward reuniting the team. The first step is connecting with Mantis for some gameplay in an alternate realm of the literal emotional landscape, where we learn that Drax is still alive (shocker, right?). With a brief detour through an entertaining flashback, featuring a very ’70s-porn mustache on Peter, and some play-as-Groot time, which is strikingly similar to a claw game machine in an arcade, we get back on track to planning the big finale mission. This involves assigning duties to each team member, after some forced step-by-step review of the enemy vessel — one of the frequent annoyances of the platform Telltale uses for their games. Also, the variable of the big-bad’s son is in the mix, almost as a purposeful example of the double-edged sword of using the Eternity Forge for resurrections.

The final stretch is not particularly laborious, and flows very well. There is a split between tasks and action that balances better than the annoying puzzle interludes of previous episodes. Despite the endlessly silly reality that the team starts the whole game off by killing Thanos, but then has to try to defeat lesser enemies with greater effort, the showdown to conclude the story is reasonable, and not suddenly more of a pain than any other.

In the final act, we have the choice of just one more resurrection from the Forge, and there is also a choice not to resurrect anyone and let the Forge die off — which a disappointing minority of players seem to take, per the end-game stats. We close the story out with an intact team of Guardians plus whoever is brought back to life, and a false sense of peace and quiet until the inevitable call from Nova Corps for a new mission, and a cut to credits. (After the credits, of course, is a teaser scene that can be left a mystery for anyone dumb enough to presume that Thanos cannot possibly return…)

Since there are so many things Telltale somehow got right on this episode, there is not much to complain about, but there is one — huge — miss: For all the gains made in the last two episodes on good tunes, they somehow manage not to use the title’s namesake, “Don’t Stop Believin'” at all in this installment. That alone is high crime against all things ’80s, and nearly unforgivable.

Nonetheless, this final installment of the “season” delivers a decent experience which will hopefully set the bar for any potential forthcoming stints of Guardians action from Telltale.