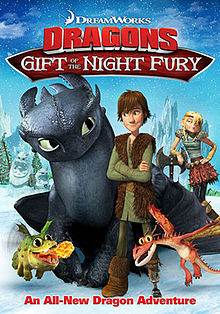 When I think of Christmas, I think of… Snoggletog?

WAY back in the day… back when the Vikings settled their war with dragons, during the annual Viking holiday Snoggletog, all the dragons suddenly disappeared. Nobody knew the reason for the season (or why the dragons disappeared), but they sadly missed their four-legged companions during their holiday. Astrid tries to bury the sadness, creating new traditions without the dragons, unsuccessfully.

Hiccup is accidentally kidnapped, taken to an island oasis where all the dragons hatch their eggs, in their animal tradition. Back at Berk, exploding eggs hatch baby dragons (and destruction) and eventually, Hiccup leads all the dragons (and babies) back to Berk and everyone truly enjoys Snoggletog together.

I’m finally getting around to watching and reviewing a few Christmas specials. I figured I should catch up on all of the End of the World programming before the world ACTUALLY ended, so it was finally time to review a few other TV specials. Even though the Vikings of Berk were celebrating Snoggletog (I can’t get enough of that word!), it is never truly defined what the holiday celebrates. Thus, DreamWorks Dragons: Gift of the Night Fury isn’t a true holdiay special, but that’s OK.

All the original actors reprise their characters here, but this is basically Jay Baruchel’s mini adventure. Speaking of character actors, I had totally forgotten McLovin was in the original Dragon movie (and didn’t really notice him here, either). I don’t know which animated movie started the TV-spin-off-special ball rolling (it was probably Kung-Fu Panda, Ice Age, or maybe some other film), but I really like them!