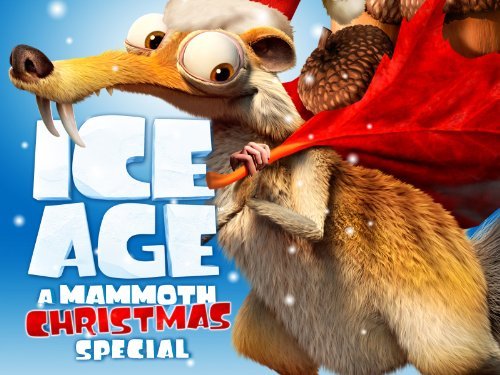 Who knew prehistoric mammals celebrated Christmas before Christ was even born? If you can get past that massive roadblock, then this animated special is right in your wheelhouse.

After destroying the Christmas Rock (Manny’s family heirloom), Manny derisively declares Sid is on Santa’s Naughty List. Upset, Sid impulsively rounds up the troops to find the North Pole and beg Santa Claus to be removed from the list. Once the others figure out Sid’s plan, they try to help, before it’s too late. Eventually, they all end up on the Naughty List and have only a few hours to save Christmas (and hopefully get onto the Nice List).

I don’t know why I didn’t review this animated TV special last year, when I wrote up an article about holiday trend-ification and animated TV specials. The whole gang is here, in Ice Age: A Mammoth Christmas, although with such a constricted time-frame, each character unsuccessfully fights for their lines of dialogue. With 22 minutes of total storytelling and new characters added to the mix, many basically have less than a few sentences to say… and that’s too bad.

Overall, this holiday special is funny. I’ve seen all of the Ice Age movies (with the exception Continental Drift, which I hope to catch on Redbox), but I never realized how Ray Romano seems to get all the great one-liners. He gets all of them here, as well. As the main character, Romano gets the majority of the dialogue. But the others (such as John Leguizamo) have far fewer things to do. I even stunned myself when I realized the funniest creature of the program said nothing in the English language, just squeaked and squawked. Proves a point: Comedy truly is difficult, in any language.

Notable Quotes:
– “Oh, Christmas Rock, Oh, Christmas Rock… you’re 30 tons of granite.”
– “A Christmas Tree? You know how ridiculous that sounds?”
– “You’re about to BE a spirit of Christmas, Sid!”
– “You want an honest answer? Or a Christmas answer?”
– “We are the Santourage.”