Enuattii — Nature’s Law Has No Mercy Part One

Last year I wrote, produced and made my directorial debut with Lwa: All Saints’ Eve. This year, I’m back as writer/producer on Enuattii with Rashaad Santiago as director.

Lurking in his mind for 10 years, Rashaad wanted his creature based around Native American Indian lore, so we began collaborating on bringing the monster to life. I got busy writing the script and after a year and several revisions, brought in a long-time collaborator and friend as co-writer, Lee Bateman, to help us lock the screenplay in its final form. “It’s over 9,000!!!”

Bringing the Enuattii to life requires an entire team of tremendously skilled artists. 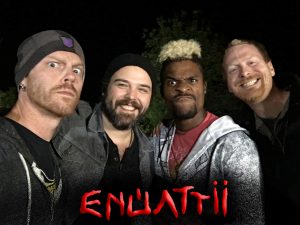 Beginning with Rashaad’s sketches and maquettes, I brought in Elliot Fernandez. Elliot created incredible concept and design work for us on Lwa: All Saints’ Eve, and I had to have him on Enuattii. He was able to provide us turnarounds (artwork that shows all sides of the creature design) and we began the process of creating the creature suit.

Leading us to another awesome returning artistic team. Tolin FX, headed by Steve Tolin, provided Special FX for me last year on Lwa: All Saints’ Eve. Tolin’s team for Enuattii includes Face Off alumni Eddie Holecko, Tate Steinsiek, Gwen Crew and Rick Prince, and features Rashaad as lead sculptor. Also on the Tolin FX team are artists Kyle Roberts, Devin Seman, Mercedes Linke, Dale Capellanio, Jackie Pickens, Jamie Apgar and many more that were in the studio or on location.

We will be combining top-flight practical effects with state-of-the-art CGI provided by Magnetic Dreams to fully realize Rashaad’s vision for the Enuattii. 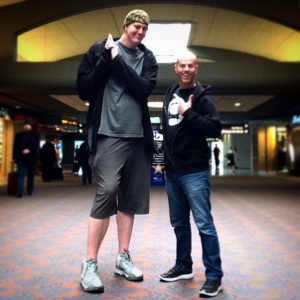 One of of the Enuattii’s appeal is the actor in the suit: Daniel Gilchrist. I had the honor of meeting and casting Daniel in the title role. Not only is he an amazing human being and brilliant actor, but he is also 7 foot 7 inches tall. Once fully in character, the Enuattii stands close to nine feet tall.

*We have reached out to Guinness World Records about having potentially broken the current record. =)

I’ve gathered a selection of exclusive on-set images to take you with us on this adventure in film… enjoy!