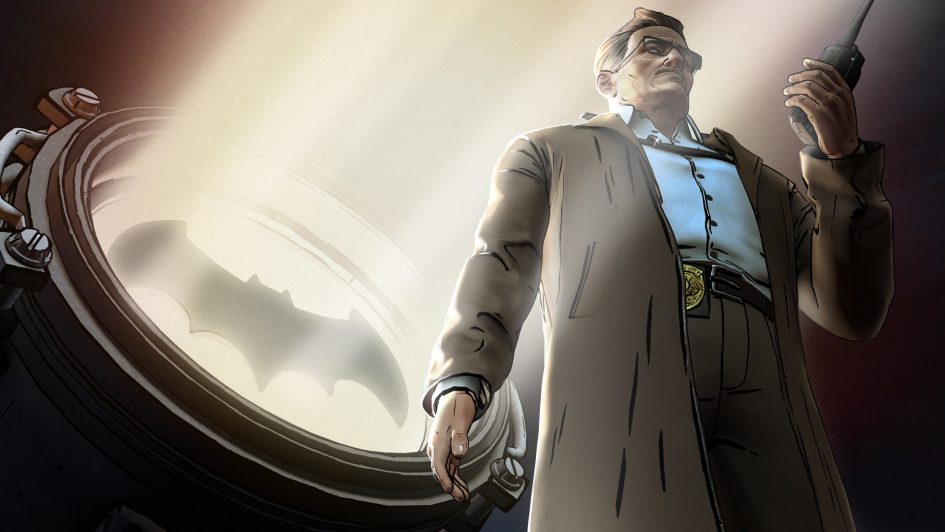 We make decisions and we have to live with them. I live with the regret that my actions, or rather inactions, turned Harvey Dent into Two-Face. By Episode 3: New World Order, the latest episode in Batman: The Telltale Series, we watch, almost helplessly, as a newly appointed and newly scarred Mayor Harvey Dent takes office.

Episode 3 takes place approximately two weeks after the last episode. Dent wins the mayoral election after his opponent is killed during a televised debate by the Penguin and the Children of Arkham. The Children of Arkham is a terrorist group bent on reclaiming the city from the powers that have ruled Gotham for years: corrupt old money and politicians. Their targets include Bruce Wayne and the Wayne family legacy.

Most of Episode 3 feels like watching a television program play out rather than playing a game. It’s a well-crafted story, but the further into the game I progress, the less I feel as if I’m controlling the action. My earlier decisions have put me on a narrowing path, whose ultimate destination I cannot escape.

I’m helpless as I watch my friend, Harvey Dent, slowly spiral into madness as the Two-Face persona emerges a little at a time. I’m powerless as the board of directors vote out Bruce Wayne as CEO of Wayne Enterprises and vote in Oswald Cobblepot, the Penguin. I’m fated to defeat at the hands of the leader of the Children of Arkham, despite my flawless button pressing, only to be rescued by Catwoman. And I’m destined to get caught in an awkward position at Selina Kyle’s apartment by her former boyfriend, Harvey Dent.

The game seems focused on hitting plot points, rather than the outcome of my button presses. I understand the game needs to present more challenges to Bruce Wayne and Batman, but the game is constantly undercutting the character’s ability to avoid danger, up to the conclusion where Bruce Wayne is drugged with a rage-inducing poison and publicly attacks new Wayne Enterprises CEO, Oswald Cobblepot. 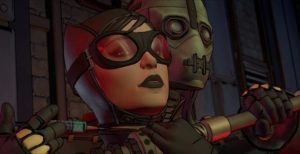 There is an interesting interaction between Catwoman and Batman. After nearly dying during an encounter with the Children of Arkham, Batman is rescued by Catwoman. She brings him to her small apartment to nurse him back to health. And here the player is given the option to have a romantic encounter with Selina or to continue a platonic relationship. At the end of the game, the percentage of game players who choose either option is displayed. I was in the vast minority of the six percent who did not have sex with Catwoman.

The game does surprise the player, once again, by revealing a well-known seemingly innocuous character is the leader of the Children of Arkham. By scrambling the Batman mythos yet again, I have hope that Harvey Dent may be able to overcome his fate as the villainous Two-Face.

Episode 3 is the third of a five-episode game. The next episode preview shows Bruce being committed to Arkham Asylum for his attack on Cobblepot, falling to the lowest of the series. I hope Telltale will allow the player some say in the redemption of Bruce Wayne in the final two episodes.