EPIX Attempts to Get Shorty 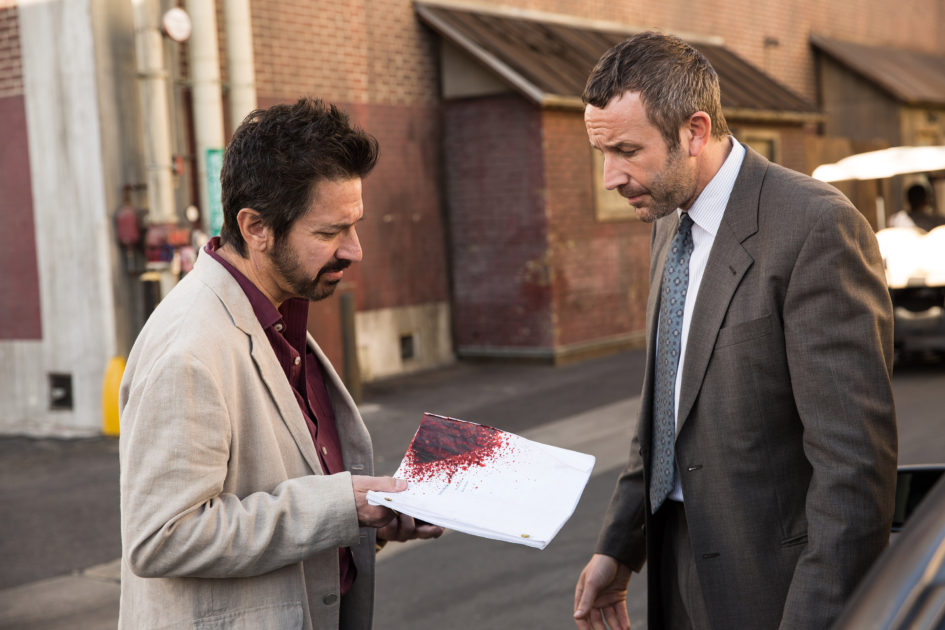 Per Matt
Back in 1994, Quentin Tarantino made a name for himself with the release of Pulp Fiction and John Travolta’s casting felt like an act of genius. But for Travolta’s comeback to be complete, he’d have to follow up the film with another great role. Before signing onto Get Shorty, Travolta asked for Tarantino’s opinion of the script, based on Elmore Leonard’s novel, which he ultimately approved. Barry Sonnenfeld helped make the big-screen adaptation a success and I immediately became a big fan of Leonard’s writing style, as well as Sonnenfeld’s film.

Out of Sight, Jackie Brown, 3:10 to Yuma, Justified and The Big Bounce were all adapted from Leonard’s works, each one great in different ways. Twenty-two years later, Get Shorty has returned to the pop-culture zeitgeist as an EPIX original series, which is based on the novel, as well as the feature film of the same name. This time around, there’s no clean-shaven Chili Palmer (the role that Travolta previously portrayed), but the same crime-filled vibe persists with the scruffy Irishman, Miles Daly (played by Chris O’Dowd). The stylish colors of Miami have been swapped for the dirty, dusty desert outside Pahrump, Nevada, but there’s bits of jazz music played throughout the two-episode series premiere that make this TV show feel related to the movie.

While Daly isn’t a loan shark, he does work for a crooked mobster, Amara de Escalones (Lidia Porto, in a wickedly great role), who runs the Silver Dust Casino, but all he wants to do is reconnect with his recently separated wife, as well as their child. Vowing to go straight, he comes across a screenplay that’s dying to be produced. Literally. Hoping to break into show business and go straight, Miles takes the idea to Amara to finance the movie as a silent partner, with all proceeds being clean, while getting his big break in Hollywood, in hopes of going legit and hopefully reuniting with his family.

“You talk to a writer for three minutes and suddenly you’re Marvin Scorcese.”

Clearly, this is a Hollywood satire, and having lived in Southern California for a while, it’s pretty accurate at times. That makes the subtle jabs of humor really funny. However, the storyline moves at a leisurely pace — sometimes a little too slow — which is something the tightly written movie never experienced.

Get Shorty feels like an HBO TV show at heart. The no-holds barred depiction of violence and harsh language feels natural, getting explored in a format that wasn’t possible for a two-hour movie. The biggest difference, so far, between the two adaptations is the caliber of acting. The movie offered an all-star cast that brought just another great element to the overall experience. The TV version isn’t quite at that level, but it is good. O’Dowd owns this role as the sympathetic gangster with a somewhat obsession with Rachael Ray, trying to escape his illegal past. Ray Romano’s straight-to-video filmmaker offers hope for the story going forward and there’s a good repertoire between Megan Stevenson’s movie studio executive and O’Dowd’s newbie producer. Hopefully there will be more extended interactions between the two actors. Topher Grace’s brief cameo was great and hopefully John Stamos won’t be the only upcoming special guest star to offer more humor.

This version of Get Shorty offers an ensemble storyline with Spanish flavor that Creator-Producer Davey Holmes has already crafted as his own. Season 1 will consist of only 10 episodes, but I’m already looking forward to future storylines that take place after their possible big-screen adventure concludes (and all of the drama that ensues). Hopefully EPIX will give the show plenty of time to grow. And maybe even offer glimpses of a few big-screen characters via crossover storylines.