Evil Proves To Be a Supernatural Shocker 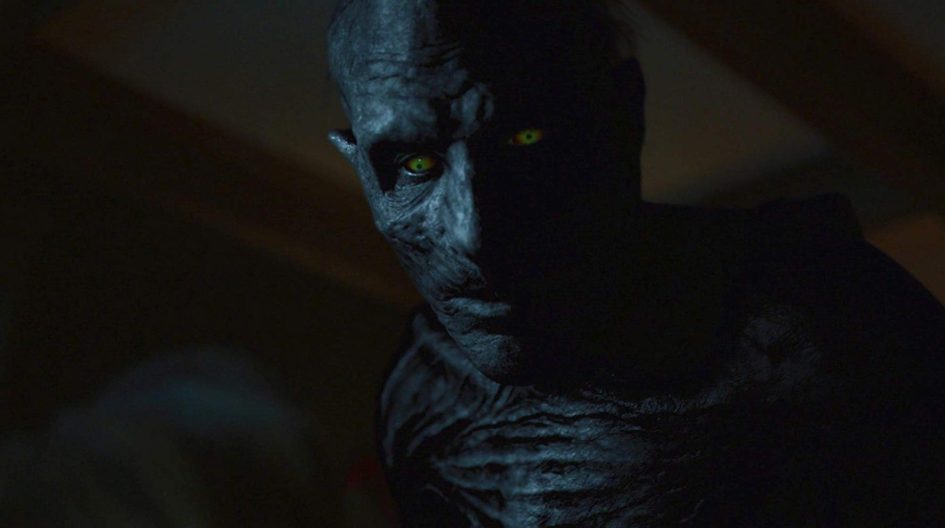 Marti Matulis gets Evil as a demon named George in the new CBS series.

The Big Bang Theory may have shut down production, but CBS’ future fortunes should be tied to Evil.

The new series, which teams a religious believer with a scientific skeptic and a blue-collar contractor to investigate unexplained phenomena and to recommend exorcisms or further research for the Catholic Church. If that scenario sounds complicated… well, it is. And the results after watching only one episode might be shocking.

Evil is everything Emergence isn’t.

Katja Herbers is Dr. Kristen Bouchard, a clinical psychologist with four daughters at home, an absent husband guiding tourists up mountains and an oncoming avalanche of student-loan debts. Mike Colter, no longer a Defender, smoothly slides into his role as a world traveler and a a priest-in-training who has seen his share of supernatural and extraordinary experiences, including demonic possession. It’s basically a reverse X-Files setup and it really seems to work.

With a backlog of about 500,000 requests for exorcisms and miracle appraisals, the Catholic Church needs all the help it can get. Along with Aasif Mandvi, this trio has become a group of paranormal investigators who are exploring many of life’s great mysteries.

Having just watched the premiere of Emergence the previous day, it may be unfair to compare the two shows, but I’m going to do it anyway. Evil has better actors, better written characters, better direction and impactful storyline twists that are immediate… basically Evil is everything that Emergence isn’t. So it should be to no one’s surprise which show will receive a Season Pass on my DVR.

One of the most intriguing aspects of the show is the physical embodiment of the demon named George, who definitely makes his presence felt in Kristen’s dreams. The power of suggestion is touched upon and the late-night visits and provocations by this nightmarish shadow figure reveal there are 60 other demons like him out there, so the group should have their hands full for the next few years, should the show have high enough ratings to elicit multiple renewals. And the Big Bad may be no other than the great Michael Emerson, simply recalling the creepiness he oozed from past shows like LOST and The X-Files (surprise, surprise).

“The world is getting worse because evil is no longer isolated.”

But the show isn’t only focusing on violent crimes. The next episode to air will explore medical miracles, fitting more in line with the network’s previously established demographics and hopefully lightening the mood from the already-established grisly actions.

The husband-wife team of Michelle and Robert King, working as the writers and director of this series, have hooked me, while making it look easy — I’m sure it wasn’t. The only complaint I have is the almost generic-sounding one-word title. While the word “evil” does sum up the show, it doesn’t quite embody the greatness of the show. It might even detract new viewers from checking it out.

If there was any way to change the title after the first episode has already aired, I wish it could happen. This show is that good.

Everybody needs to see it.