Fargo: The Law of Vacant Places 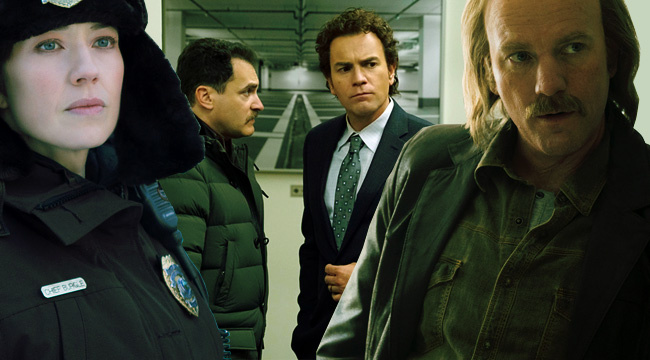 Fargo, in case you didn’t know, is one of the best black comedy, crime dramas on television. This year, the crime anthology tells the story of Emmit and Ray Stussy. Emmit is a wealthy businessman and Ray, a parole officer. Emmit had tricked Ray into giving him a valuable stamp collection when they were teens and, apparently, Ray has been getting his money from Emmit since. Emmit, now facing money issues, himself, will no longer give Ray cash. Ray decides it’s time to get back what he thinks is his and he hires someone to steal the last, remaining stamp. Needless to say, it didn’t go smoothly. Still with me??? Emmit has his own problems to deal with, as what he thought was a loan for his business was really an “investment” with some interesting strings attached.

Noah Hawley is probably one of the most stylistic directors on television now. The TV show has a cinematic feel about it. I find myself watching the show, sticking with it episode after episode, more for the camera work than the characters. As you watch, everything feels very intentional, from musical choices to coloring and lighting. It’s the work of a true artist. Noah should be directing the next big box-office hit, to be honest. The writing has gotten better in Season 3, it seems, so far. The show has always suffered from a slow and plodding story, however, this season seems to have more action. While it’s hard for me to assume the direction the entire season will take from one episode, I can say the first episode seemed to be action packed. While I love Noah as a director, his writing style isn’t my favorite. I am hoping he can keep the pace up this season.

This season the “star” is Ewan McGregor, who plays the brothers Emmit and Ray. Not as much fun as some of the other guest stars, but an interesting choice. His performance is stiff at times, perhaps due to the script, but the work he has put into crafting the two characters shows. To be honest, it always seems as if the characters in Fargo are stiff. Perhaps “stiff” isn’t the correct word. Maybe it’s that they all have a quiet intensity. Every movement on this show seems very intentional, sometimes too intentional. I smell over direction. Hawley needs to learn how to let the actors become the characters and take over his creations. Carrie Coon plays the police officer this year. It’s too early in the show for me to say much about her character yet, other than it suffers from the same stiffness tempered with a touch of melancholy.

I really think Season 3 of Fargo could very well be the show’s best season, yet. So far, Season 3 has no connections to the other two seasons. Season 3 seems to be getting away from the Coen Brothers’ film and more into itself. A brand upon itself, so to speak. It’s more gimmicky, more darkly comedic and less confused violence by inherently violent people. I’m very interested to see exactly where this season will go. Fargo remains a four-star television series — let’s see if this season will take it to five.