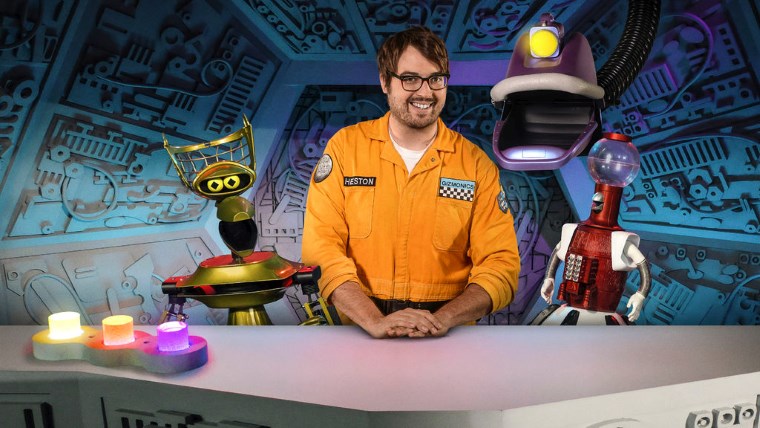 It’s hard to believe that it has been 18 years since Mystery Science Theater 3000 has been on the air. And just by using the first three episodes of the new season as a barometer, the show barely believes it, either. In fact, the characters barely acknowledge it.

The premise remains as simple as it was in 1989: A mad scientist has abducted a blue-collar worker and plans to drive him insane by exposing him to terrible movies. Then, according to the immortal theme song, “[the blue-collar worker] tries to keep his sanity, with the help of his robot friends.” Even during the original 197 episode run, the cast was rotating in and out. Well-meaning Joel was replaced with the hapless Mike. The evil Dr. Forrester was supplanted by his mother, Pearl. The voices of the series’ mascots, Crow T. Robot and Tom Servo, changed at least once.

This modular structure made reviving MST3K with a new cast an easy task. Kinga Forrester (Felicia Day) has abducted Jonah Heston (Jonah Ray) in hopes of continuing the family business (torture by mad scientist), with eyes toward commercializing the process.

The first episode cruises right over the premise and hits the ground running. If you have a problem with them glossing over the impetus for the action, or barely taking time to introduce the sci-fi elements, I introduce you to ‘The Mantra’ (also found in the theme song): “Repeat to yourself, ‘It’s just a show. I should really just relax.'”

The host intro to the first episode is… OK. It’s obvious that the crew is still trying to find their rhythm with each other. Jonah has a pretty good rapport with the bots (voiced by Baron Vaughn and Hampton Yount), but the fact that his portions were filmed at a totally different time than the Mads (Kinga and TV’s Son of TV’s Frank — played by Patton Oswalt) is pretty jarring. In contrast to Jonah and the bots, Patton and Felicia seemed to struggle to find that same familiar camaraderie. Even the invention exchange from the earliest seasons of the show have made a return. The familiar is still here, though it may be slightly different.

As the episodes progress, the segments begin to feel more natural and less forced, even with the Mads. The production schedule for the show was apparently quite brutal, and it seems as if the cast and crew were learning to work with each other as it was going along. And I understand why it happened, there are a lot of people that have to get their schedules together to film a show, it is just more obvious than I would like it to be.

The new robot voices will also take some getting used to. Hampton Yount fares the best out of the robots, his voice skewing the closest to the older actors. Baron Vaughn’s voice as Tom isn’t bad, but he sounds very similar to Jonah, which can make it difficult to determine who is telling jokes in the theater. Most distracting to me, however, was Rebecca Hanson as Gypsy. Again, there’s nothing wrong with the voice, it is just jarringly different than what Gypsy sounded like in previous incarnations.

But that still leaves the big question: Is it funny? And to that, I am happy to report that it is. Incredibly funny. The movies are bad and the jokes are funny. MST3K has truly returned. In fact, there are probably more jokes per minute in the new season than there were in the older episodes. Some fans have criticized this, saying that the pacing of the jokes takes away from the laid-back atmosphere the show has always projected. And, I must admit, there were a couple of times I took notice, but it was never enough to take away from the experience. In fact, episodes two and three do pull the reins on the pace. I think Jonah could slow his delivery down a tad, but beyond that, I have no qualms about the jokes. They land hard and often. There are even callbacks to several classic episodes, that made me smile from ear to ear.

In fact, my biggest complaint about the in-movie segments is, again, about Gypsy, who occasionally lowers into the theater, makes a one-liner and then leaves. And that’s not to say the joke isn’t funny, but the presence is odd and distracting, and I spend more time thinking to myself, “Where did she come from?” than actually paying attention to what is being said. But, as before, it isn’t enough to take away my enjoyment of the episodes. When you try new things, not everything will quite work out, and I’m not going to discount them for trying.

Things are a little different now, but that doesn’t make them bad. The new season of Mystery Science Theater 3000 doesn’t miss a step, even though it might be walking in a slightly different direction.