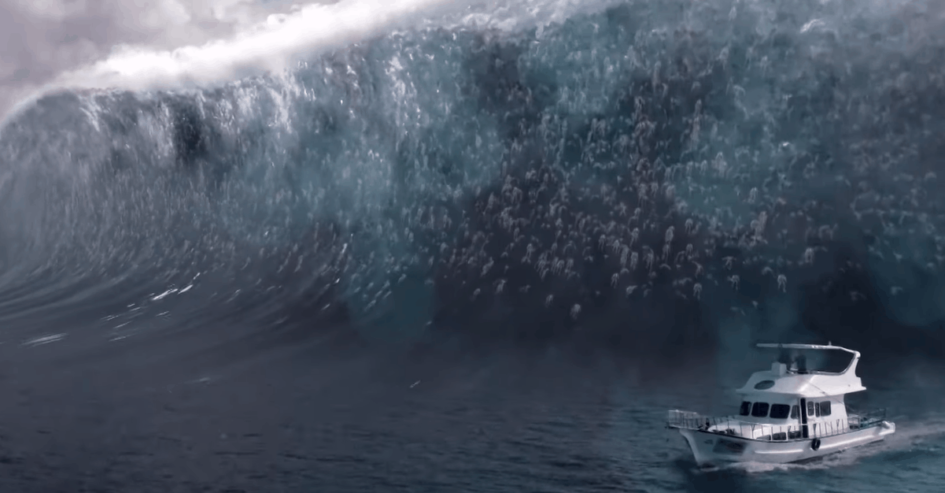 Much like Syfy’s advertisement screaming about the recently aired over-the-top tropical horror movie, I also wondered, “What took so long to come up with this?”

Up from the depths at the bottom of the sea (Or is it a lake or possibly an ocean? We’re never really told where exactly Emrys Bay is located.) an unknown menace arises. Apparently a recent earthquake has brought a small town’s shame to light… which eventually leads to a Zombie tsunami. Thus, Ian Zierling’s back where he seemingly feels at ease: Starring in ridiculously fun B-movies on Syfy.

With the Sharknado franchise wrapping up last year, it was the perfect time for Zombie Tidal Wave to crash onto the small screen. With the exception of 47 Meters Down: Uncaged, there really aren’t any monster movies currently gracing the big screen, so it only feels natural to get settled onto my comfy couch to enjoy the bloody carnage, courtesy of this flick.

First of all, if you were expecting an award-winning script from the filmmakers who brought Sharknado and many of its sequels to fruition, you’ve come to the wrong place. What this crew has done well is creating outrageous scenarios that attempt to top each previous attempt at death and destruction. This low-budget horror movie with ridiculous special effects features plenty of the usual horror stand-by storytelling tropes, including faulty equipment, spraining an ankle while trying to outrun trouble and a dead car battery, ruining any possible escape plans. Just ignore the plot holes. Nothing to see, here.

In a different type of spin on the “what’s old is new again” theme, Ziering’s Hunter Shaw battles green Zombies and the blue-skinned special infected, which constantly drip with blue blood — it has something to do with phosphorus. Naturally there’s more than one tidal wave, bringing in the reinforcements! In less than an hour the whole town has become infected and nothing seems to kill them, especially blunt-force trauma to the head, but electricity seems to definitely slow them down.

The main characters don’t get enough time to fully develop arcs since they’re constantly on the run fighting off the undead hordes, but that’s not what you’re watching this movie for… it’s the bloody battles. And there’s plenty of it.

I was shocked this Syfy Original wasn’t distributed by The Asylum, which has released multiple low-budget classics for the station, such as 5 Headed Shark Attack, Megalodon and Z Nation. This movie felt similar in style and substance to each of the previously mentioned properties. One thing I was hoping to see was some sort of Sharknado crossover end-credits scene, and sadly there weren’t any… but there’s plenty of time to squeeze out a sequel possibility by the time the credits roll, of course.

Ian Ziering has boldly embraced the cheesy genre elements that have brought him back into the pop-culture mainstream and I applaud him for it. If you know what you’re expecting from movies with as ridiculous titles as these, you can definitely enjoy the rides that are known as Sharknado and now Zombie Tidal Wave. I can only imagine what lies ahead for Syfy’s next monster movie that will air during this same time frame next year.