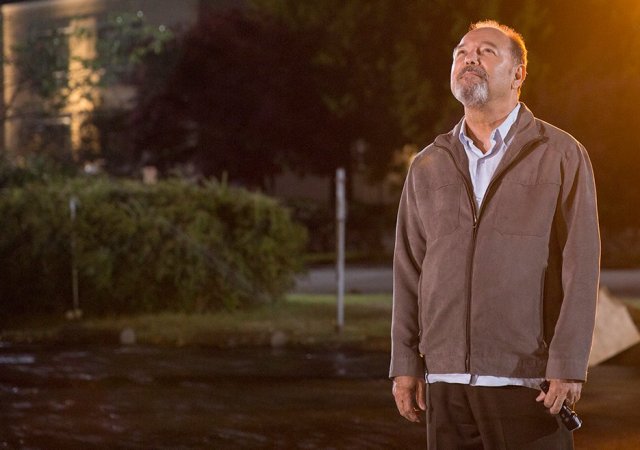 The city’s burning down, traffic isn’t moving and there’s an arena filled with walkers that are getting restless. Needless to say, it’s a bad day to be in L.A.

So begins the season finale of Fear the Walking Dead. In The Good Man, the Clark and Manawa families are packing up, ready to leave their current housing situation and returning to their original plan: It’s time to head East, into the desert.

Chris questions how to get in touch with his mother, who’s still helping Dr. Exner at the hospital. Ofelia finally opens her eyes to her father’s lies, Old Man Salazar plans to release the arena walkers, using them as a distraction for the National Guard and Travis pleads to save the captured soldier’s life when he discloses the whereabouts of the group’s family members. When Dr. Exner asks, “What is family, now?” it became a defining question for the TV show, one which will most likely linger throughout the entire series.

The military compound’s been compromised and there’s lots of gunfire, shouting and confusion going on. Strand escapes the prison with Nick, Chris and Alicia guard the group’s vehicles before getting robbed by fleeing soldiers and somehow the different groups meet up, going through the maze known as the compound and find a way to escape alive.

Strand takes the group to his home on the water, where he has supplies and a fake calmness surrounds the group as they attempt to return to “normal” lives. Preparing to leave the house to find Abigail, who’s on a boat in the Pacific Ocean, everyone must leave the house. Will they join him? The question lingers, but isn’t answered. Ofelia’s gunshot wound is cleaned, Liza will soon turn and asks Maddy to kill her, before Travis does the deed. The camera pans out to an echoing gunshot and the episode ends as if it’s a music video.

Season 1 of Fear the Walking Dead has been incredibly uneven. We’ve been rough on it because there have been many moments throughout the TV show’s six-episode season that felt unnecessary and could have been depicted differently so viewers felt more of a connection to the characters. There were too many filler moments included that could have been totally removed, in order to tell a better story. The fall of society took way too long and was filled with too many characters who couldn’t see the signs. While this is being billed as a mixed-family drama, the focus of the series waned, showing too much family bickering and not enough threats to the family to keep the audience’s attention. In fact, there were complete episodes where there weren’t any walkers at all. That has got to change!

The season finale was not the worst episode of the season, but it was not the best, either.

Thoughts for Season 2:
– Did Dr. Exner die?
– When will Tobias return?
– Is Strand is a friend or foe?
– When will Nick change out of those old-man clothes?
– What kind of future threats are in store for the group?
– When will the kids actually have something important to do?
– Only two main characters died. This needs to increase for more drama.
– When will the group start acting smart and collect weapons to protect themselves?
– Will the whole group go to Strand’s luxury yacht or are they headed off to the desert?
– Not many walkers were actually shown throughout six episodes. The season finale probably had more than 75 percent of the entire season’s undead creatures.

According to Executive Producer Dave Erickson, who made an appearance on the Talking Dead Fear Special, a new term for “walker” will be introduced in Season 2. He also stated the people who seem the least prepared for “real life” are most adaptable and ready for the Zombie Apocalypse (like Nick). We really liked the Talking Dead Fear Special and hope it returns next year to discuss the spin-off series, but since Season 2 will supposedly be twice as long as the first season, it’s unlikely Chris Hardwick would put his summertime comedy tour on hold for that extended amount of time. We will hold out hope that it will happen. Having new Zombie episodes in the summer is a really good thing, period.

“The only way to survive a mad world is to embrace the madness.”

Strength: The group is back together, finally realizing what’s going on.
Weakness: The season took WAY too long to get to this point.
WTF Moment: Now that we’ve arrived at the fall of society, can we please have a regular amount of walkers threatening the group?