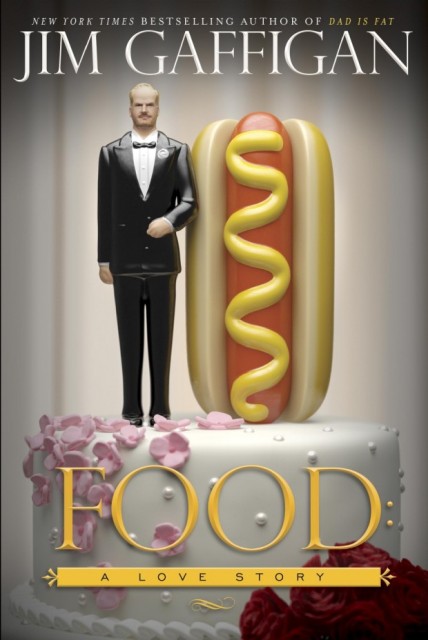 Per Matt
Thanksgiving, Christmas and possibly New Year’s Eve: They’re all holidays that are closely associated with food. Since the holiday season is wrapping up on New Year’s Day, what better time to review Food: A Love Story?

This book is written by comedian Jim Gaffigan, who has wrapped food within his humor for quite a while — his Hot Pockets jokes are especially noteworthy. Although he’s not a foodie, he considers himself an “eatie,” which means he has a general and very personal knowledge of food. It also means he really knows his food.

Throughout the book, Gaffigan tells funny anecdotes about past experiences growing up in the Midwest, breaks down every type of food genre and fast-food restaurant imaginable (all the while poking fun at mediocre restaurants and himself, for eating their mediocre food) and even creates the Jim Gaffigan Food Map, which highlights local cuisines in different regions of the United States. When it comes to food consumption, I’d say he’s pretty much an expert.

Clearly, Jim Gaffigan has an unhealthy attachment to food that’s comedy gold to readers of the book. Scattered throughout the book are some great pictures of Jim and his family eating food through the years, usually taken an inopportune times. Clearly, they’re instant classics.

Jim’s dislike of fruit is enjoyable, he passionately hates fish and shellfish and has an abusive relationship with hot peppers. But after reading this book, I now have a better understanding for his love of hot dogs, cheeseburgers and even bacon (as if that was even possible!). One word of warning, though. Reading while on an empty stomach is a dangerous proposition. One which I learned the hard way. Several times.

It is impossible to read this book without getting hungry. In fact, it’s so persuasive, I actually had to put the book down so I could make myself a bacon-covered steak to devour before reading it cover to cover.

Gaffigan uses his observational comedy to expert effect, highlighting the quirks of different cities and detailing some funny food stories surrounding his family. While he covers a wide variety of topics, sometimes he lingers a bit too long on one subject. I would have preferred to have read many separate, shorter chapters than having a few that felt longer than necessary.

This was the first book I’ve read by Jim Gaffigan and I can safely say I was impressed with his comedy… and also hungry after reading about all that food!

I received this book from Blogging For Books for this review.

Strength: Great observational humor.
Weakness: Some topics are a tad too long.
WTF Moment: There’s a restaurant in Iowa called Zombie Burger, where you can order the Undead Gaffigan!

Notable Quotes:
– “Bacon is the candy of meats.”
– “I haven’t been hungry in twelve years.”
– “I’m like the Dr. Oz of unhealthy eating.”
– “The meal isn’t over for me until I feel sick.”
– “Non-chunky guacamole just makes me sad.”
– “I wouldn’t trust them skinnies with food advice.”
– “Nobody really wants fruit. We only act like we do.”
– “Don’t trust a non-Japanese person as your sushi chef.”
– “Fried bread is like the unhealthy Switzerland of the food world.”
– “Barbecue is a noun, a verb, an adjective, and even a potato chip.”
– “I like to think coffee comes from beans; therefore, it’s a vegetable.”
– “I try to stick to three meals a day and then an additional three at night.”
– “I treat my body like a temple. A temple of doom, but a temple nonetheless.”