Vampires have always had a special place in my heart. As a kid, I would eat Count Chocula cereal. I would watch Count Duckula. I would dress as Dracula for Halloween. My bookshelf was littered with books about vampire lore. In my teen years, I turned my attention to the role-playing game series Vampire: The Masquerade. I even had a set of acrylic fangs made for me that fit perfectly on top of my less-than-stellar natural set of teeth. Even today, I have the Aurora model set for Count Dracula that I put together years ago, sitting on a shelf in my home.

There have been some good and bad vamp movies over the years. The Lost Boys, Fright Night, Let The Right One In and Interview With The Vampire all come to mind. Each of these films was unique, but all had the same basic formula that helped them succeed. In vampire flicks, the audience needs to have someone they can be engaged with. Someone that they find themselves caring about. It may be a vampire trying to suppress the evil side of their heart. Maybe it is a human character who, while flawed, has a good heart.

These movies tend to focus more on human aspects to draw you in, with supernatural elements playing around the outside. Vampires have a laundry list of powers and weaknesses, and most viewers know these from the start. If filmmakers remove the focus from what we already know and give us the heart and soul in a humanized character, vampire films can become memorable.

On the other side of the token, you have the bad vampire movies. Some I remember are Dracula 2000, Cirque du Freak and Abraham Lincoln: Vampire Hunter. Coincidentally, those movies made the IMDB list for the Top 10 worst vampire movies made. Many of these failed to establish a sympathetic character for the audience to attach to. In fact, I can only tell you one character from these movies, and more often than not it is the main vampire and not someone I grew attached to.

Also, some of the worst offenders try to rewrite the powers and weaknesses of vampires to an absurd level. While I usually think tinkering with a “tried and true” formula is bold and refreshing if done right, many vampire film writers who try this go way off the rails, turning vamps into unkillable machines of mayhem. If I don’t have someone to cheer on against this unwinnable situation, the film just becomes boring and dumb. Sadly, most vampire movies lately have followed this path.

Netflix has added the Rat Pack Filmproduktion vampire movie Blood Red Sky to its current lineup of horror films. As we all know, Netflix is not particularly well known for presenting quality horror movies, opting for the “more is more” mindset, buying or churning out films to satisfy the growing desires of on-demand content from their viewers. With more trash than treasure in the list of horror movies the streaming service makes available, is Blood Red Sky just another garbage flick?

The answer may surprise you.

Blood Red Sky is the story of a German mom named Nadja (Peri Baumeister) and her son, Elias (Carl Anton Koch). The mother and son duo are traveling to the U.S. to meet with doctors to help Nadja with what appears to be leukemia. En route, the plane is hijacked by a group of men, including a sadistic killer named Eightball (Alexander Scheer) and their leader, Berg (Dominic Purcell). After killing the air marshals on the plane, the hijackers force a Muslim passenger named Farid (Kais Setti) to read a prepared statement, making the hijacking look like a terrorist suicide plot.

Attempting to hide on the plane, Nadja is shot several times by Eightball and left for dead. Shortly after being shot, Nadja recovers and makes her way to the cargo hold where she devours a dog, revealing herself to be a vampire. Her deteriorating condition has happened due to her reluctance to drink human blood, completing her transformation into a member of the undead. However, after being discovered by one of the hijackers, Nadja is forced to drink his blood, turning her. With only a short amount of time left before her humanity is lost, Nadja must figure out how to save her precious son from a fate worse than death, while saving him from the plane full of hijackers. 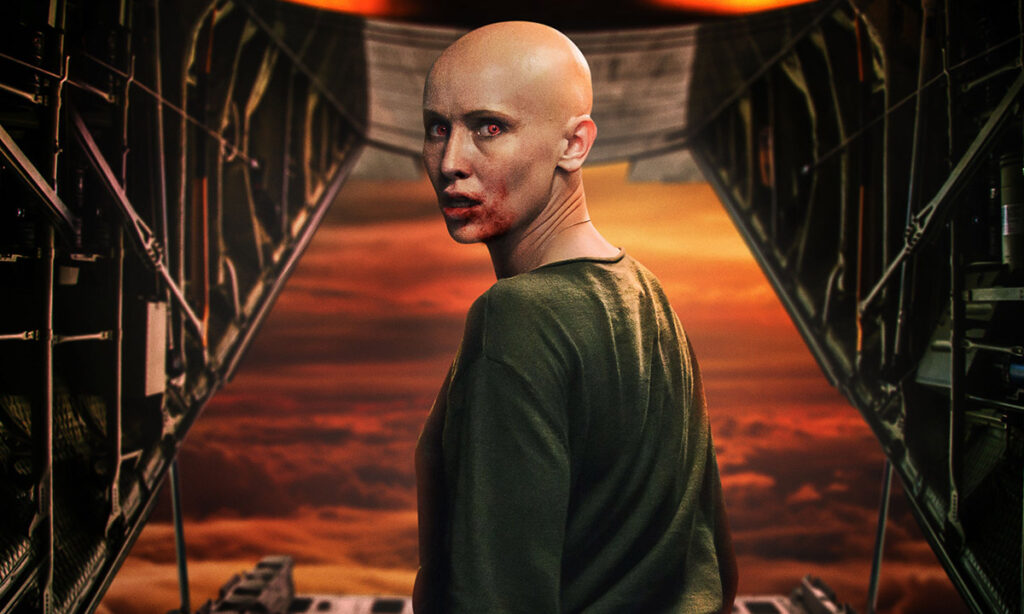 Blood Red Sky takes inspiration from multiple films. Beyond the Snakes on a Plane aspect previously mentioned, you have ferocious vampires much like the ones seen in Quentin Tarantino’s From Dusk Til Dawn. Another inspiration appears to have come from the film Train to Busan (a great film I reviewed before, so if you would like to hear my thoughts on it, click HERE). Blood Red Sky does a pretty good job of meshing these films together and coming out with something that is unique, which as I have mentioned before, is rare in Netflix films.

However, the film is not without flaws. Blood Red Sky clocks in at 121 minutes, which is insanely long for a horror film. While the action is good and the story works, the pacing is completely destroyed by flashback scenes. These flashbacks pull us out of the moment and drop us into scenes with a completely different beat to them. It’s like if you were listening to heavy metal music then suddenly switch to a classical station. The cuts make Blood Red Sky feel even longer than it is.

Do I love Blood Red Sky? No, but I don’t have to love a film to see that it is something unique and working in the right direction. I give Blood Red Sky three out of five stars. It’s not a great film, but it is a good vampire film with a new concept and characters to care about. As a horror fan, I recommend it if you are looking for something new to check out.