Frankenstein is Shocked Back to Life With IFC Midnight’s Depraved

IFC Midnight’s Depraved is a modern-day retelling of the highly loved horror classic, Frankenstein, which was written by Mary Shelley in January of 1818. In the 202 years since her story first reached the light of day, there have been numerous copycats of the story, with Universal Studios producing its iconic film of the same name, starring Boris Karloff in the role that he would become known for and the de facto image that the words “Frankenstein’s Monster” conjures in the minds of almost every single person.

As mentioned, Depraved gives an updated version of the story. After having an argument with his girlfriend (Chloe Levine), Alex (Owen Campbell) goes out for a walk to cool off. Moments later, he is rushed by an assailant, who stabs him multiple times. With no help around, Alex succumbs to his wounds and dies. The next thing he knows, he awakes in a strange lab, covered in scars, stitches and bruises, not to mention several new body parts attached to him, including his face. 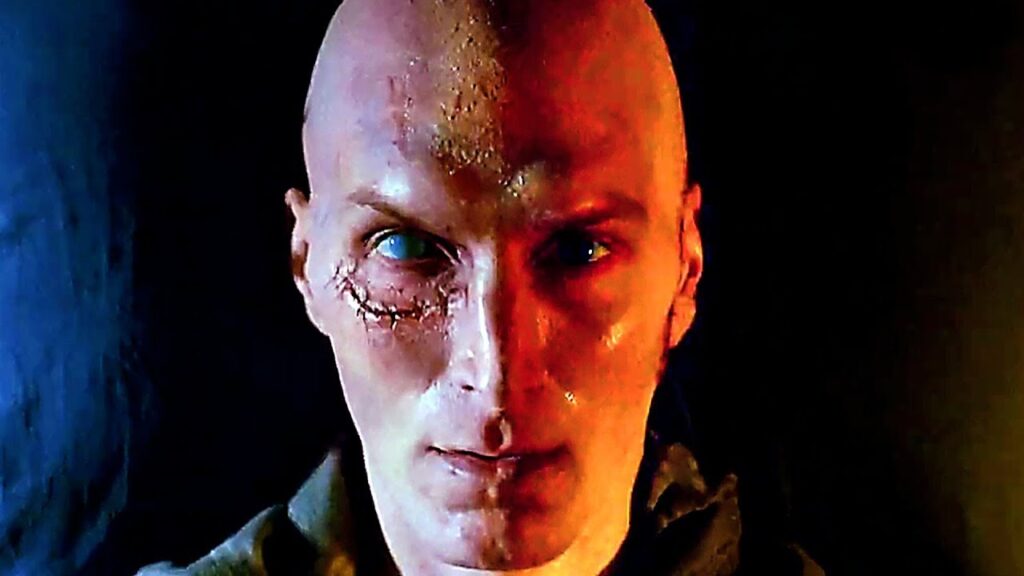 Alex’s creator, Henry (David Call), renames his Adam (Alex Breaux… since he has a new face) and begins to teach Adam how to become human again. Henry treats Adam like a son in most respects, cleaning up after him when he wets himself, and helping him to learn basic functions like eating and speaking. But when Henry’s past is revealed, along with the intentions of his associate, Polidori (Joshua Leonard), the Utopian world that Adam was living in becomes shattered and a real Hell is released from within his inner being.

Depraved, while being a retelling of the Frankenstein story, changes it up some. In the 1931 film, Frankenstein (the one I mentioned earlier, that starred Boris Karloff), the monster is seen as a vile and evil creature from the start, since his brain was that of a criminal. But Adam’s brain was taken from a man who appeared to be just an ordinary guy. A man in love with his girlfriend, but dealing with commitment issues that appear to be his only crime. And Henry spends much of the film trying to mentor and rehabilitate Adam, protecting him from the world as best he could. His father-like care of his creation is in stark contrast to the fear and horror displayed by Dr. Frankenstein, who tried to destroy his creation.

The film works very well in its premise. This is primarily due to filmmaker Larry Fessenden. Fessenden is no stranger to the indie horror scene. Having directed films like Wendigo, The Last Winter and Beneath, Larry had taken a break from his directing duties to work with other talent on their projects. So, after a six-year absence, Depraved marked his return to the chair. Fessenden put on many hats for this project as well, working on writing, producing and editing. In a sense, much like the character, Henry, Larry saw every aspect of its development into the film it is today.

And much like the titular monster of Frankenstein, Depraved feels like it is stitched together. The beginning of the film plays out like a drama, with Henry working tirelessly with Adam, helping him develop from the mindset of a toddler into a man, as best he could. Then, once Adam meets Polidori, the father-son dynamic is put to a test, as Adam finds out more and more about how and why he was created. The tension in this part of the film is deep, much like a psychological thriller. And then, in its third act, Depraved follows the footsteps of its horror ancestors, turning man into monster. It is all done very well and just works. Depraved is an testament to the filmmaking abilities of Larry Fessenden.

With all the good things Depraved brings to the table, its biggest flaw is that it drags on and on. The first two acts of the film seem to be overly short, compared to the extraneously long final act. It feels like when writing the story, Fessenden got tired and just wanted to get to the horror parts of the film. Don’t get me wrong: his style works in the film, but the final part just seemed to go on way too long. It may have to do with the predictability of what was about to happen, which can be guessed throughout the film. Depraved just feels like a movie that did not want to end.

Depraved gets a score of four out of five stars. For a low-budget indie horror film, it packs a ton of power in its long runtime. Larry Fessenden may have some rust from his years away from the director’s chair, but it doesn’t show much… except maybe in the editing and writing of the film’s final act. Still, Depraved is a beautiful horror film that does the original work by Mary Shelley proud.