Free Guy is Probably the Best Gaming Movie Ever Made

Ryan Reynolds has one of the most “geek and gamer approved” resumes in Hollywood. Reynolds continues to shine as a beacon of light in the nerd community, an actor who looks like he was destined for romantic comedies, playing the pretty boy in every film made. He has played the Green Lantern for DC and Deadpool for Marvel, with the latter being his most noteworthy role. Even though it seems he has the exact same style in every film he is in, Ryan still holds strong.

While superhero films have been all the rage in Hollywood for years now, the gamer market has been kinda left in the dust. Sure, we got movies like Warcraft and Sonic, but for the most part, the gaming genre has not been tapped as in the past. Ready Player One was probably the deepest and most grand gaming film; however, it shared much of its story with TV and film, making it more of a “pop culture” film than just a film about gaming. Grandma’s Boy was another underrated film, though it focused on the “real world” side of games and not in the gaming world, itself.

Ryan Reynolds’ latest movie, Free Guy, fully taps into that market. In the film, Ryan portrays Guy, a bank teller who dreams of meeting the girl of his dreams. Every day, the world around Guy follows the same course, until one day. On this day, Guy literally bumps into Molotov Girl/Millie (Jodie Comer). From this moment forward, Guy starts making changes in his life, starting with picking a different shirt to ordering a cappuccino, instead of his regular coffee. It is not until the daily bank robbery that Guy takes a major change. He ends up taking the sunglasses from the would-be robber, allowing Guy to see the world for what it truly is: a massively multiplayer online game.

No longer wanting to just be a background character in this world, Guy teams up with Millie to “level up” and assist her. In the real world, Millie is a computer game designer. She and her partner, Keys (Joe Keery), created a game that promised advanced A.I., but was stolen by Antoine (Taika Waititi), though neither have any proof. Millie is obsessed with finding proof of the theft, while Keys was so defeated in losing the work that he ended up going to work for Antoine. Millie calls on Keys multiple times to help her find proof in the game. It isn’t until Guy reveals a secret to Millie that the two real-life programmers begin to work together to bring Antoine down. 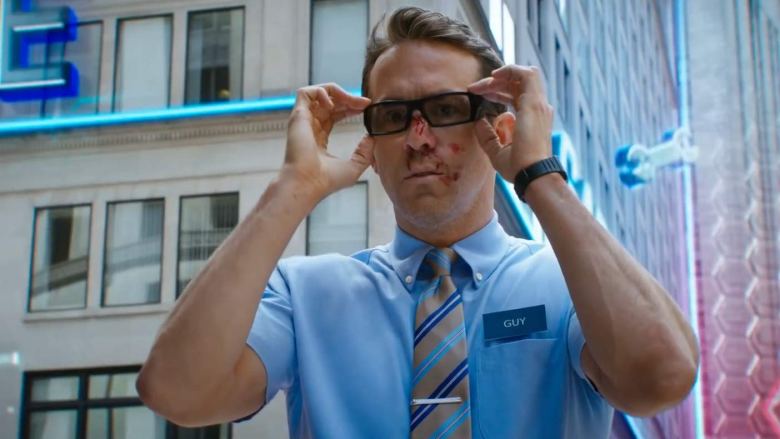 Honestly, I went into Free Guy with limited expectations. I love Ryan Reynolds, but like I said: He plays the same person in almost every film. I assumed this would be the case in Free Guy. While I was right, somehow, someway, it just worked. I cannot explain it. But Ryan Reynolds playing the same character type he almost always plays just made Free Guy an enjoyable film. I laughed. I cared. I even frigging cheered during the final battle (let the fact that Disney now owns the film set your expectations of what happens here).

Free Guy is not based on a single game on the market. It is more of an amalgamation of multiple games. The majority of the game world seems much like Grand Theft Auto. At some points, you have definite Fortnite vibes, especially in costume designs and several other first-person-shooter influences can be seen. It’s definitely a gamer’s movie, possibly the best gaming movie ever made.

I give Free Guy a solid four out of five stars. Ryan Reynolds is the only thing holding this film back from being perfect, because his characterization is starting to become stale, but he is still funny and perfect for the naive Guy character. I loved the cameos of famous YouTube and Twitch stars. The story was easy to follow and the characters have depth to them. All in all, Free Guy is a great film that you should check out if you love gaming or action comedies.