Game of Thrones: Episode One – Iron from Ice 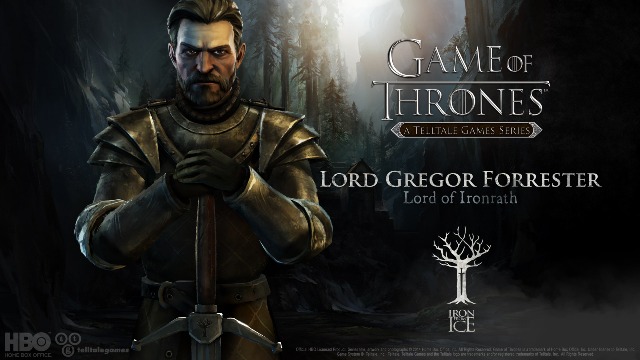 Per Matt
Inspired by the same fantasy, drama and politics of the novels, as well as the HBO television series of the same name, Telltale Games has another hit video game with Game of Thrones.

And just like its original source material, the episodic point-and-click adventure game focuses on an ensemble cast of characters that enter and exit the video game with regularity.

While the game highlights new names and faces as playable characters, they often interact with many well-established characters based on George R. R. Martin’s universe. In fact, quite a few of the same actors from the TV series reprise their roles, including Peter Dinklage, Lena Headey, Natalie Dormer and Iwan Rheon, with additional cast members expected to appear in later episodes.

Depicted events take place between the end of the TV series’ Season 3 and the beginning of Season 5.

There’s an ongoing battle concerning the ownership of Ironwood trees. When their wood is carved into armor, they are practically indestructible, so expect plenty of conflict and deceit on display. The game is played via five different characters, and as a result, offers five different perspectives. Only three are provided in Episode One, with two additional characters to arrive in subsequent episodes.

– Gared Tuttle is the first playable character. He’s a squire for Lord Forrester and promised a promotion the following day, but first he must survive The Red Wedding.

– Ethan Forrester is the second playable character. He’s the newly appointed 7-year-old lord of House Forrester, who already has some mighty big shoes to fill.

– Mira Forrester is the final playable character. She is the handmaiden of Lady Margaery and presents an unnecessary headache for the soon-to-be Queen.

The well-established Telltale formula is present, where past decisions influence future choices, encouraging multiple playthroughs for the player to experience all possible scenarios.

Episode One: Iron from Ice is an immersive experience. Just as J. R. R. Tolkein created encyclopedic backstories for The Hobbit and The Lord of the Rings, George R. R. Martin has created highly detailed storylines for his novels. This video game is no different. The estimated playtime is two hours and 15 minutes. That means it’s longer than more than a few feature films!

Comparing the first episode with another recent Telltale release, Tales from the Borderlands, Game of Thrones is less action oriented and includes many more conversations. The main difference between the two is the player’s knowledge of Martin’s backstory. It is very helpful and even recommended for Player 1 to have read the books or have watched the TV series prior to playing this game (while the backstory isn’t as important for Tales from the Borderlands). While this was my first experience stepping into Martin’s universe, it would’ve been helpful to have known about prior events, but not necessary to enjoy the game.

All of the related achievements and trophies are story related. None of them are missable.

Player 1 has MANY decisions to make throughout Episode One; however, I enjoyed controlling squire Tuttle the most. This character is more action oriented than the others. My only complaint of the game involves his battles during The Red Wedding. You must make fast decisions on the battlefield, sometimes choosing actions before the option to do so appears on the screen.

The remaining playable characters must balance between doing what’s best for the family with their overall loyalty to their King. Luckily, many family members and friends help with your decision process.

There’s plenty of great music performed throughout the game and many of the characters are inspired in part by past historical figures. While there’s an incredible number of conversations (probably the most of any Telltale video game) and as a result, decisions to be made, I thought Telltale did a great job of laying the framework for the franchise. However, so many conversations seemed to slow the game’s progress. I hope there’s far more action taking place in future episodes.

Looking ahead, I’m also excited to explore The Wall and get more information concerning the mysterious North Grove, as well.

Telltale Games does an excellent job of transporting Player 1 into George R. R. Martin’s universe. As a fan of fantasy storylines, I can highly recommend it!

Strength: Enjoyable storyline and an immersive environment.
Weakness: Characters are a little too talkative.
WTF Moment: Holding a wound open for medieval medicine (and inserting maggots to prevent infection) was gruesome!

Notable Quotes:
– “Iron from Ice!”
– “Nothing is worse than Norren.”
– “I suppose this beats pig farming.”
– “Loyalty can be such a hard thing to find.”
– “We must find our amusements where we can.”
– “Men find courage from the bottom of their cups.”
– “I wouldn’t mind tarnishing that white cloak of his.”
– “If that displeases you, then I trust you can find the door.”
– “The North Grove may very well be vital to saving this house.”
– “Can we truly blame those who wind up on the wrong side of war?”