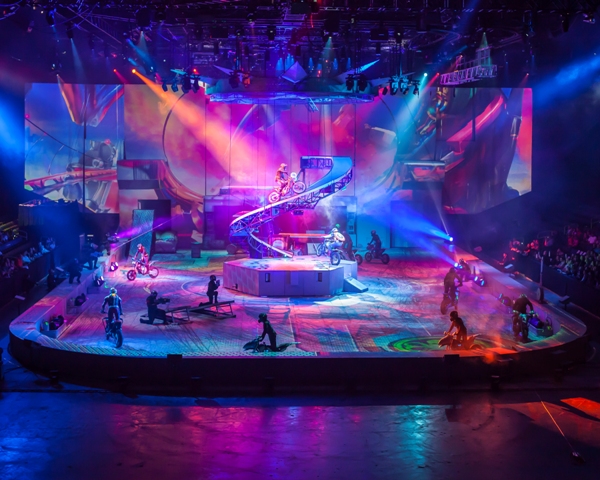 Produced by Feld Entertainment and performed at Bridgestone Arena, the audience experienced an original storyline inspired, in part, by the Marvel Cinematic Universe and as an extension, Marvel Comics.

Loki was up to no good, as usual. Cloning the Cosmic Cube, his power-hungry attempts were stymied by many Marvel superheroes. The resulting battles they waged took place at different countries, scattered across the planet. With more than 25 Marvel characters on hand, watching the show felt like being inside one of the movies (or even the comic books).

There were lots of pyrotechnics, explosions and high-flying combat on display. Speaking of flying, multiple characters whisked this way and that throughout the air, but my favorite character was the Green Goblin. Flying on his vehicle, in mid air, he battled Spider-Man, which was #incredible.

Each of the characters behaved just as their comic-book counterparts. I especially enjoyed the Chitauri and mad scientist characters, whose highly detailed costumes were movie quality. It was equally fun to see those evil minions get knocked around.

With more than 25 characters scattered throughout the storyline, some fade to the background or disappear all together, which was unfortunate. I’m guessing it was due to time constraints.

The Statue of Liberty set was impressive, but the highlight of the evening took place on Hydra Island, which featured motorcycle stunts so good, they almost looked fake. In fact, the motorcycle chase felt like a real-life Trials HD video game!

The entire staging of the event was a rather large area, taking up to half of the length of the Predators’ ice rink. Employees built the set while the spotlight and the audience’s focus was shifted elsewhere. I only wish there was a big screen opposite the main stage with continuous closeups focused on actors, since I couldn’t always see who was talking or what action was taking place. Maybe setting up the stage on the opposite side of the rink would’ve been better to display a second big screen?

Overall, we really enjoyed the show. There were many references aimed toward fans of the Marvel comics, movies, video games and TV shows. Even beginner fans, not well versed on the Marvel Universe, will enjoy the show. Once the weekend ended, the Nashville shows were finished for 2014. But fear not, true believers, because Marvel Universe LIVE! is headed to another city near you.