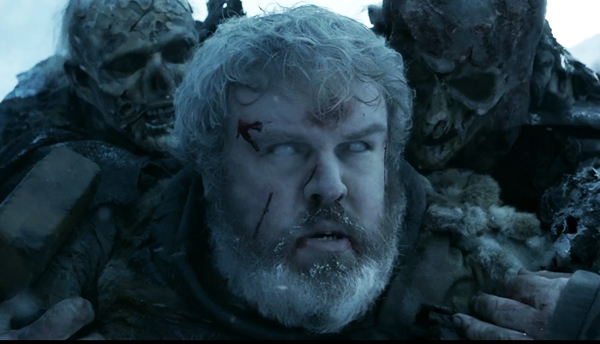 If you’re a Game of Thrones fan, and you’re up to date on the most recent episode, The Door, you know two things: where Hodor got his affliction and that it is part of a time paradox. This game-changing revelation is rife with possible impact throughout the  continuity.

We learn of this impactful development in a tense scene of Bran’s party being raided by White Walkers in the cave of the Three-Eyed Raven. During a harrowing escape, we see alternating cuts of Bran visioning back to Hodor’s past as a stable boy, and Bran’s warg-controlled Hodor… holding… the door…. as the young folks escape. As one of our favorite characters is evidently taken by the hordes of the White Walker’s Zombies, the whole thing comes together with Hodor being told to hold the door and the vision of him having what appears to be a seizure, while repeating his instructions to “hold the door,” and merging it into the only word he will know for his life thereafter: Hodor.

It was moving. It was shocking. It was unexpected. It was everything any moment in Game should be. Amazing.

But what really sets it apart is the always-delicious mind-blowing that comes when one contemplates any time paradox. For this, Bran is responsible for the Hodor-ing of Hodor, who already existed, and so on. Will this be how he learns a lesson about interfering with time? Are there other massive effects he might have on events of the past?

Thinking about this can put you in a joyous but frustrating state of endless thought, not unfamiliar to those of us who’ve been longtime Doctor Who or Star Trek fans. One thing is for sure: This turn of events makes up for the hiatus Bran’s crew took last season. Almost.