Preacher: One Hell of a Pilot 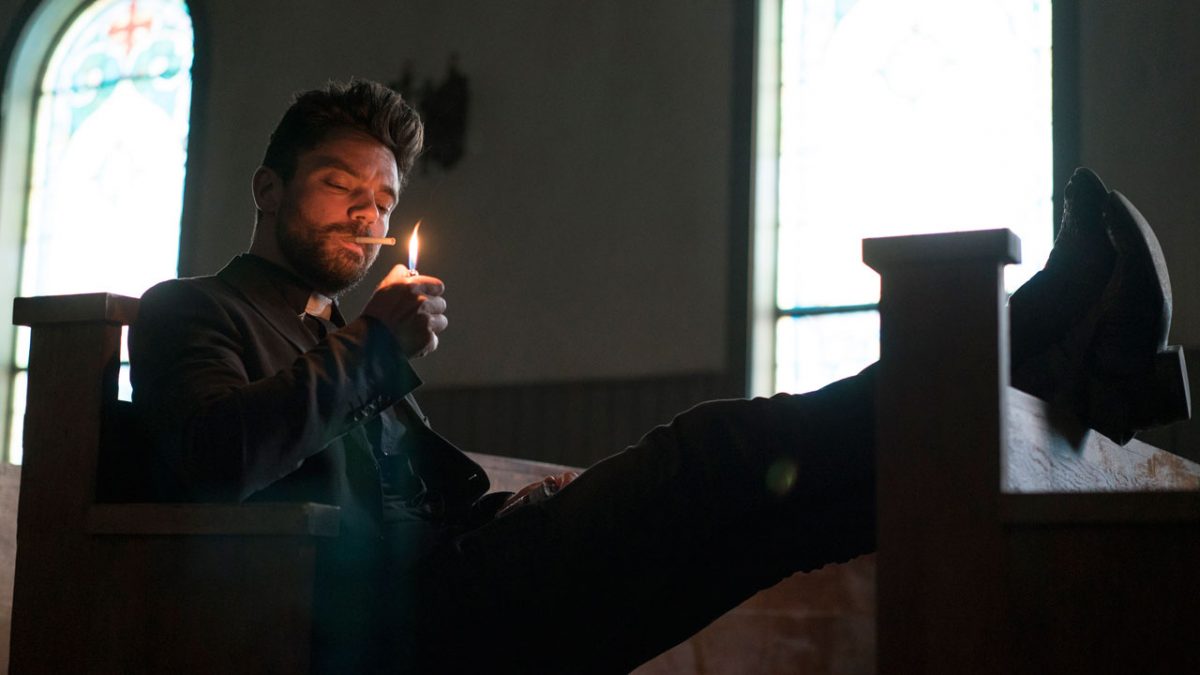 I don’t really know what I was expecting from this TV show, based on the comic book series of the same name, but this was most definitely not it.

I should back up a bit. I’ve never read any of the comics that this new series, developed by Seth Rogen and Evan Goldberg (Superbad), is based on. I know comic creator Garth Ennis’ name primarily from his work on Punisher and I saw plenty of issues in the comic store I frequented back in high school. So, I only had a passing knowledge, based only on my glimpses of art here and there, and occasionally hearing some character names (the titular Preacher, deformed “Arseface”). Maybe I associated it with Stephen King’s Dark Tower series, because apparently I had no clue what the series was about.

And honestly, even after watching the pilot, I’m not too sure that I know what the series is about.

And I could not be more thrilled.

In just one hour, Preacher managed to completely enrapture me. This is a world that I absolutely must see more of.

From the opening shots, we are zoomed through what almost looks like a cheap model of the solar system, as an unknown force makes its way down to Earth and slams into an African priest. Who promptly explodes into a fountain of blood. This shocking juxtaposition really sets the tone for the hour that is to follow.

Next, we meet Jesse Custer (Dominic Cooper), the titular Preacher, as he sleepwalks through a Sunday service. We watch this man drift through his mundane life, certain that he has left a dark — and probably violent — life behind. Cooper has the perfect amount of world weariness to Custer, along with a Texas drawl that makes you forget all about his turn as Howard Stark in the Marvel Cinematic Universe.

Then we move to Cassidy (Joseph Gilgun), who is busy taking drugs and partying on a private plane. Rather than risk spoiling it, I’ll just say that things quickly turn very violent in a very unexpected way.

The third main character is Tulip (Ruth Negga, also found in the MCU), a femme fatale who feels like she has fallen out of a modern version of Faster, Pussycat! Kill! Kill! and has some sort of history with Custer. Tulip’s story, while also violent, feels completely different that the other storylines we have seen, which really seems to be one of the show’s greatest strengths. These three storylines are tonally very different, but still somehow feel similar to one another.

As things continue, we are introduced to the everyday aspects of Custer’s life, most memorably his relationship with the disfigured Eugene, son of the town’s sheriff, who looks to Custer for spiritual guidance. However, because Custer doesn’t really believe in the advice he is doling out, he goes to a bar to get drunk and this is where we get a glimpse of Custer’s dark past, as a well-choreographed fight sequence has him taking down several rednecks.

After being released from jail, Custer has decided he is done with being a Preacher, and, in a terrifically acted scene, he goes to his church to ask God for a sign. Anything to prove his existence. That’s when the unknown force from outer space (which has blown up someone else in Russia), creepily comes in the front door and glides into Custer.

Custer awakens three days later, on Sunday, but he finds himself feeling different. More confident. This is made abundantly clear with the sharp focus on Custer and keeping everything else around him soft and fuzzy. A particularly chatty parishioner, who was previously unable to take Custer’s advice, finds himself unable to do anything but follow the Preacher’s commands, to the literal end. Custer vows to the congregation to be a better man and a better Preacher.

While the individual elements are constructed beautifully and generally merged together well, there were occasional moments of tonal whiplash that kept me from being able to wholly engage. Feeling like the lovechild between Twin Peaks and the criminally under-seen Carnivale, Preacher displays vast amounts of potential. If the showrunners are able to keep up this level of quality, intrigue and unique voice, AMC has another surefire hit on their hands.