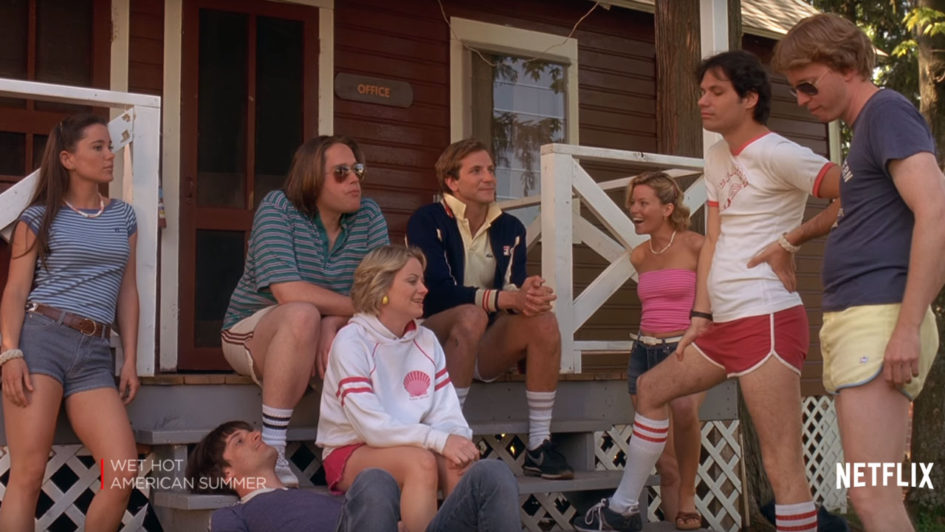 When the film Wet Hot American Summer (WHAS) first premiered in 2001, no one could have predicted the sudden resurgence in popularity it would get nearly 15 years later. The under-seen classic featured a cast of cult stars and unknowns, many of whom went on to become huge (Bradley Cooper, Paul Rudd, Elizabeth Banks, Amy Poehler), with the rest of the cast enjoying varying degrees of success in the intervening years. WHAS may be the last truly great film parody, lampooning 1980s summer camp films perfectly.

So, two years ago, when Netflix released a prequel series, it was a shock that this highly diverse and monumentally busy cast was able to return — alongside a bevy of new stars that added even more laughs (Chris Pine, Jon Hamm, Kristen Wiig). Against all odds, First Day of Camp (FDoC) may actually be funnier than the original movie. And both still get quoted in my household quite regularly.

The biggest problem comes from the attempts to wrangle the massive cast. At least one role is recast, and it is handled in a very meta-textual way. The joke stemming from this decision is pretty funny, but the character spends so much time ostracized from the rest of the story that it comes across as a bit pointless and perhaps a waste of Adam Scott.

This type of story segregation runs deep throughout the show, with characters barely interacting with each other. Sometimes the show does break the fourth wall and bring attention to it (the type of humor that David Wain and Michael Showalter do best), but it feels borne more out of necessity, than pure humor. It is very akin to Season 4 of Arrested Development, in that there is a terrific ensemble cast that doesn’t get to bounce off each other very much, and the series feels weaker, overall, as a result.

The original film and FDoC can probably be best described as “a series of jokes and self-aware comments loosely strung together by plot.” Ten Years Later is surprisingly plot heavy. The plot, itself, is relatively nonsensical, but there are moments in the second half of the run where it no longer felt like I was watching WHAS; it felt like one of the films it was lampooning. This was not helped by the fact that a lot of heavy lifting in this plot was done by two new characters, who, while having a hilarious introduction, were never given a lot of reason to be cared about. Or it was done by characters that were not interacting with the rest of the narrative.

These issues aside, Wet Hot American Summer: Ten Years Later is still a very funny, very irreverent series. But when you are following up two stone-cold classics (in my opinion, anyway), it can be tough to live up to that expectations and still feel like a slight disappointment.