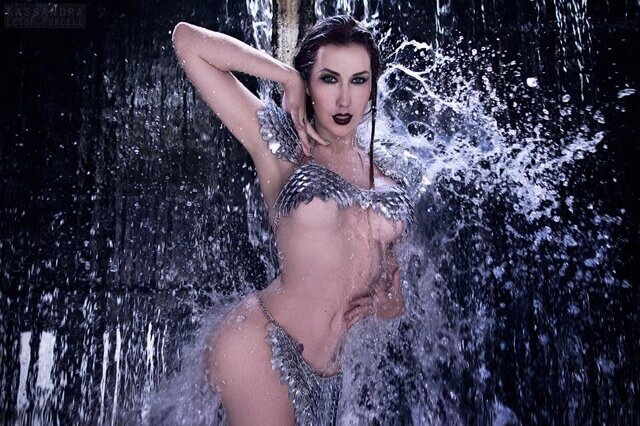 Per Matt
Solara may be a big fan of Sailor Moon, but she’s also got a dark side. When she’s not modeling for Geek Goddess, she’s also a special-effects artist, creating the blood and gore for different horror movies. At Dragon Con, I visited with Solara to discuss her various cosplay costumes and preview the upcoming 2015 Geek Goddess pin-up calendar.

How did you get introduced to cosplay?
– “Would you consider Halloween cosplay? Because I do. I was a little girl. My dad made me watch Bride of Chucky and I dressed up as Tiffany that year. My dad also introduced me to The X-Men. When I was little, he would read me the comics. I think I was 6, but technical, technical cosplay was probably three or four years ago.”

What was your first convention?
– “My first comic convention was Mega Con. I do not remember the year, because I’m really shitty at math. My costume was Baby Doll, from Sucker Punch. My Grandma makes my costumes, because I can’t sew for shit and I don’t have the patience. But that doesn’t mean I’m not a quality cosplayer, just because I have commissions. I credit them.”

What costume are you wearing today?
– “I am wearing an original take on Diana’s human form, from Sailor Moon. She was a little, grey kitten. She was Chibiusa’s kitty. Cassandra — she’s also one of our photographers as well — illustrated it. We did a set together. It’s in our 2015 calendar and then we both did our individual sets.” 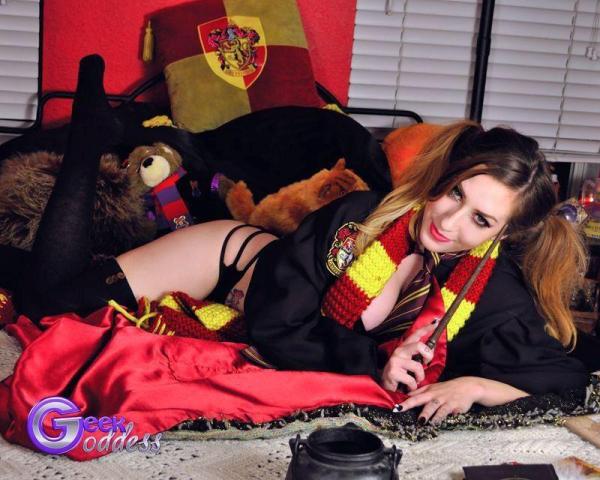 What costume are you most known for wearing?
– “Up until now, I would definitely say it’s a tie between my Poison Ivy and my Gryffindor student. A lot of people mistake my Gryffindor student for Hermione — it’s just a generic student. Hermione has an awesome lion’s mane and I have smooth, curly pigtails, in my set. Poison Ivy was after that. I was in it with Jessica (she was Harley Quinn). They’re the terrible twosome. Now, I want to say my Diana is going to be my most popular. Yesterday, I sold out of the first batch that we had. People are eating it up like hotcakes, before I even had the costume on.”

How did you get introduced to Geek Goddess?
– “Jessica Nova, the co-owner, is a friend of mine and we met, actually, the first time I went to Mega Con. The funny thing is, when I met her, she liked me because I started talking about cats. Our friend was trying to flirt with me and I was totally ignoring him. She and I kept in contact and then I got my boobs done in Brazil. She started the Website and she asked, ‘Do you know anybody who hasn’t worked for a similar-style Website?’ So, I slept on it and really, really thought about it. Well, it’s a way to reimburse myself. I mean, I bought them, I might as well show them.”

What kind of advice would you give to beginning cosplayers?
– “Whatever your nerdom is, just fucking go for it. Go balls to the wall. Don’t let other people judge you. Nowadays, because the cosplay community is so popular, you’ve got some people who are super judgmental. Just have fun. If you look good, if you put work into your costume, just wear it. Don’t give a fuck. Also, don’t do anything too hard. If you’re like me and you’re a perfectionist, just know it takes a chunk out of your bank. Try to go for the easy shit, first. This is supposed to be fun. Don’t take it too seriously.”

What are you currently geeking out to?
– “I’m currently geeking out to Game of Thrones. I just finished Orange is the New Black. I know it’s not technically nerdy shit, but all my other shows are on hiatus: American Horror Story, Walking Dead, the new Sailor Moon (Sailor Moon Crystal)… holy shit! I love Space Dandy. It’s very funny; it’s fucking awesome. I’m going to be a Boobies Girl, soon. I’m not going to be Honey…”

“I geek over things that are not necessarily geeky. I’m a big horror buff. My favorite movies of all time are House of 1000 Corpses and Devil’s Rejects, directed and written by Rob Zombie. I actually will be doing a Baby Firefly set, hopefully by Halloween. It’s a relatively easy costume to do, I’m just trying to find the right wigs to do…”

“A lot of people don’t know this, but I’m a special-effects artist. So, I make all the blood and gore in horror movies. I’m a stickler, when it comes to horror movies. I’ll watch the shitty ones in theaters, but the problem is it’s a dying art, because CGI is cheaper. The new Evil Dead is amazing. I was absolutely impressed with the remake. I didn’t actually like the old ones. Coming from a prosthetic point of view, they were fucking terrible and very cheesy. They’re funny, but I don’t consider then horror movies. I want to say the 2013 version was 90 percent prosthetics and 10 percent CGI, for cleanup. I think I saw it in the theater five times. I like all horror movies, for the most part.” 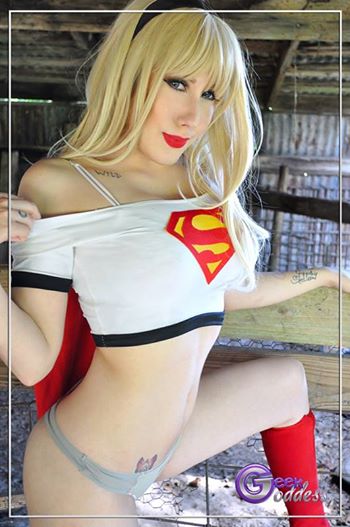 Are you a gamer?
– “I am. I do not have any game consoles. A couple of years ago, my XBOX, like farted. I didn’t know you could trade it in, so I tossed it. The problem with being a girl, like Cassandra, we’re girly type girls who are into the fashion world and cosplay and being gamers, we have to pick one of the three. So, for me, if I was going to have a game console, I literally would not go to bed. I would not come out of my house. I don’t come out of my house, already. If I had a game console, I would not ever leave.”

“The funny thing is, I still buy video games for the XBOX 360, because my friend has the XBOX 360. I’ll call him or her up, ‘I just got this new game, it may not be multiplayer, but I’m going to come over and play it while you do your shit.’ So, that’s what I do. The last game I played was Arkham City. I’m a big Catwoman fan.”

Do you go to a lot of Florida conventions?
– “I would say, yeah. I will go to Mega Con and Supercon. I might be going to Spooky Empire in October. I was going to go to Animate in Miami in November, but I will actually be in Mexico for a month, while it’s going on. While I’m not bummed to be in Mexico for a month, but I’m bummed that all the Sailor Moon and Space Dandy voice actors will be there. In December, I may go to Holiday Matsuri, just because I want to do the Maid Cafe thing, but I always say I’m going to go, then I never go.”