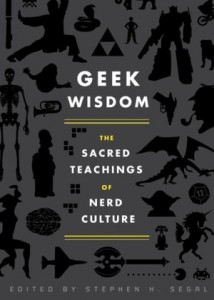 With the first book to review in 2012, I would like to acknowledge the empathetic state of mind reading is alive and well. How else could Stephen H. Segal have crafted such an engrossing look into the Geek psyche? It’s almost like he scanned my mind!

Segal spans geeky pop-cultural references throughout the years and chooses the popular — and some not-so-popular — to detail how they relate to the nerdverse. These “holy scriptures” of geekdom can teach us a little bit about ourselves that might normally be hidden in a storage bin of our closet, sitting alongside our dusty Ewok village and Mint in Sealed Box (MISB) Transformers.

Each of the pop-culture quotes is followed by a teaching of symbolism that can be relatable in real life (IRL). Some positive; others negative… All Real. These quotes come from the heart. They define the id, ego and superego of the nerd. And in my instance, some of the teachings cut to the quick. They are the elements that are sometimes (or always) hidden from our family and friends, tucked away for us to enjoy — or geek out to — later, when we are alone. Some come from television and movies. Others from novels. And still others come from people in real life.

Never, in all my life, would I have related the age-old sayings of Optimus Prime, to those of Martin Luther King Jr. The odd thing is, it actually worked for me. Segal reads between the lines of pop culture and reveals a bit of his soul.

As a writer myself, I’ve always appreciated the art of writing smart dialog and felt screenwriters have always been underappreciated. This book helps me solidify my beliefs. And the running gag of David Bowie’s ongoing presence within Nerd Culture made reading this book all-the-more enjoyable.

This book defines me, to the Nth degree. Almost a bit scary, in that regard. I grew up loving these quotes. I live them today, each and every day.

In the foreward, Segal states this is his inner nerd’s “first compendium.” Although he credits only one Research Assistant, Ryan Brophy, there is much hope this’ll be a very successful book. I hope to read many more compendiums. And I hope each one employs many more research assistants to list more great knowledge.

Strength: Great Geeky Quotes! Great Insight!
Weakness: Need more quotes from video games, Twitter or Facebook. I smell a second compendium!
WTF Moment: I’m geeky enough to note a typo without having to look it up. Megatron’s human voice actor was Frank Welker, not “Frank Walker,” as listed on page 176 (but correctly identified in the index).

Noteworthy Quotes:
– “When there’s no more room in Hell, the dead will walk the Earth.”
– “All your base are belong to us”
– “Klaatu Barada Nikto!”
– “Now we know. And knowing is half the battle!”
– “No matter where you go… there you are.”
– “Facts do not cease to exist because they are ignored.”
– “The sky above the port was the color of television, tuned to a dead channel.”
– “Fantasy is the impossible made probable. Science fiction is the improbable made possible.”
– “At least I have chicken.”