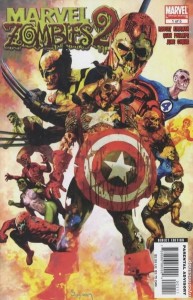 After a brief visit to the sideways / parallel universe, Robert Kirkman (The Walking Dead) returns to write a true sequel for the Marvel Zombies. In this storyline, 40 years have passed since the superheroes of Earth-2149 became Zombies. So, after 40 years, what’s new in this world?

Earth-2149 is still a ravaged planet. Humanity, which was once wiped out, is alive and well at New Wakanda, led by an aging Black Panther. Tensions mount while a cult-like faction defies T’Challa, creating a clash in the small community. Wasp has learned after a certain amount of time without feasting, The Hunger leaves the mind… but can willfully return upon the next human meal. Zombie Col. America has fallen (again) and a few new Zombie Superheroes join the former group.

Gladiator, Phoenix, Firelord and Thanos join this new group. Resolving to return to Earth, they hope to repair the previously destroyed dimensional stargate and devour other universes; instead, they find a new meal.

A battle breaks out at New Wakanda. Lives are lost. Some transform into Zombies. But something strange occurs: Zombies now have feelings! A civil war breaks out among the Zombies: those who regret past transgressions and want to help humanity… and those who want to eat them. This new moody, EMO undead crowd sides with the humans and attempts to resolve the conflict, culminating in a cliffhanger.

Ultimately, this miniseries zigs when past series zagged. While it seemed Kirkman wrote himself into a corner in past series and had decimated all hopes of future sequels… this one finally reveals a few important factoids for future continuity. Yet it leaves out a few important details that transpired the previous 40 years. Like how, exactly, did these new undead superheroes survive without detection for 40 years? And where have they been?

The Marvel Zombie Universe keeps expanding, but at the same time, receding. The series begins and the new group has formed and there’s zero backstory. How are they alive? Why have they joined the group? And later, more Zombies are defeated.

But my biggest complaint comes from the main Zombie Superheroes themselves. Parts of their bodies (and costumes) continually change in each miniseries, never remaining the same. It’s a given, when obtaining new powers, they might change outfits a bit (like when they consumed Galactus). But even then, in that example, body parts are lost, regrown and even lost again for no given reason. It’s as if the artist, Sean Phillips, (who has worked on all four Marvel Zombies series at this point), forgot how he depicted the characters in past issues and decided not to review past images. This is unacceptable.

While this isn’t the first Marvel Civil War, it was handled decently. And the subsequent miniseries feels like a possible reboot, featuring and killing all-new second-tier Marvel Superheroes. Previously, I was worried there would be a water-down storyline and was mildly appreciative of the outcome. I look forward to reviewing the next outing of Marvel Zombies. Until then…

Noteworthy Quotes:
– “I can’t believe we ate the whole thing.”
– “You turned my son into a monster!”
– “Gone! They’re someone else’s problem now!”