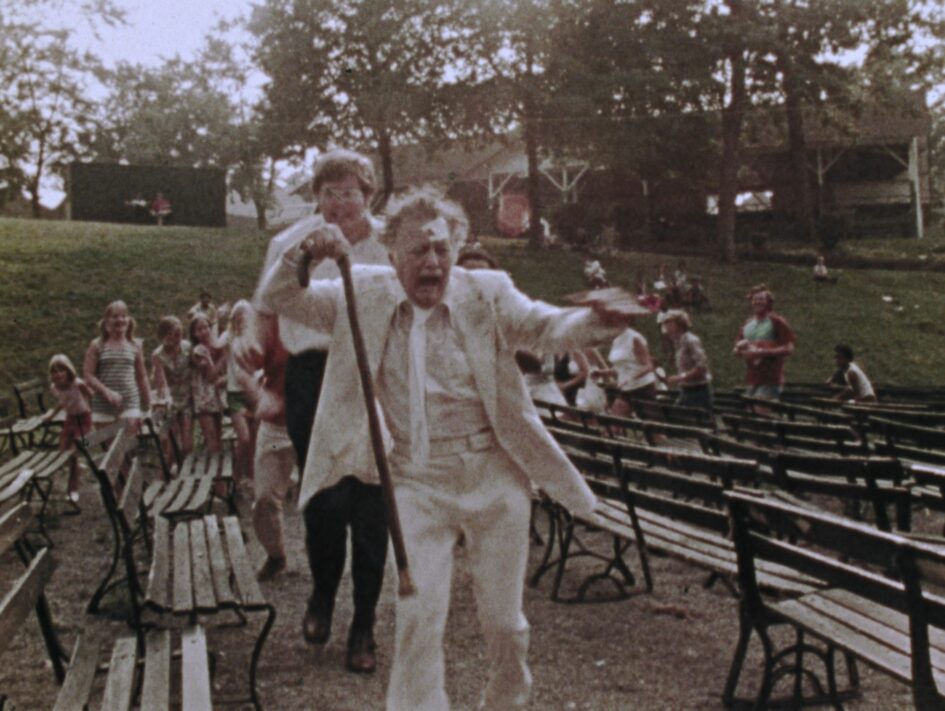 Director George Romero may have passed away in 2017, but his legacy lives on. Most people will know the legendary director as the father of Zombies, with his Night of the Living Dead movies being iconic horror films. Other Romero releases include classics like The Crazies, Creepshow and Monkey Shines. However, in 2017, another film he directed was uncovered after it was thought to be lost. And recently, Shudder, the horror streaming service, got their hands on the film.

That film is The Amusement Park.

Unlike Romero’s previously mentioned accolades, The Amusement Park was very different. The film was commissioned by the Lutheran Service Society of Western Pennsylvania as a take on the plight of the ever-growing elderly population. The intent of the film was to give a stylized glimpse into elder abuse and discrimination. George Romero, in between filming Season of the Witch and The Crazies, took this job as his only work-for-hire film and applied his vision to it. The Lutheran Service Society did not have the same vision for The Amusement Park, and quickly scrapped it after completion. The general consensus was that Romero’s vision was “too edgy” for the Society.

The Amusement Park starts off much like an infomercial or PSA. The star and narrator, Lincoln Maazel, tells the audience about the issues that the aging members of society experience. Services and opportunities begin to dry up. The places you could once visit or things you could once do are no longer available. Soon, the elderly lose their freedoms, becoming a burden on the people around them. To drive home this point, Maazel takes us to an amusement park full of people.

After this initial narrative, Maazel meets a man dressed in the same white attire he is wearing. However, this gentleman is hurt, bleeding from wounds on his head, and unable to carry on much of a conversation. The injured man tells Maazel that there is nothing out there, regarding the door that Maazel is about to exit. Ignoring his warning, Maazel opens it and enters the bustling park.

Once Maazel steps through the door, it is clear that Romero’s views on government and society, in general, take over. The staff of the amusement park, as well as some of the patrons, take a passive-aggressive stance toward Lincoln and other older patrons of the park. The ticket booth swindles elders out of prized antiques. Ride operators refuse them to ride, citing the signs that read more like medical warnings than coaster guidelines. The discrimination becomes very apparent during a bumper car ride, when an elderly lady rear-ends a younger man, leading to some rather inflammatory words exchanged and police showing up, treating the bumper car ride like an actual car collision.

The Amusement Park continues down the stylized view of reality that only Romero in the 1970s could bring. It is gritty and hard to swallow. Maybe this is why the Lutheran Society decided to shelve this film, never allowing it to be seen. I do not understand their thoughts on getting George Romero to make this film if they feared the message that would be brought forth. At this point in his career, Romero was known to be outspoken about his views on things such as the Vietnam War and other controversial government actions. They paid George Romero to be George Romero, then balked at getting George Romero. I really wish I understood their desires for what The Amusement Park was supposed to be.

The film’s runtime is less than one hour. But the overall feel and heaviness of The Amusement Park make it feel longer. As an audience member, I was plunged into the plight that Maazel’s character was going through. It felt as if we (the audience and Lincoln) should know that something is off. We should know that this world is not a reality. But the same mental haze that plagues the elderly in the film seems to extend to us. Everything seems slightly skewed, but the line between truth and lies is hard to discern. Being able to drag your audience into a movie is normally seen as a major plus for any filmmaker. And Romero did this effortlessly.

If you are a huge fan of George Romero’s horror films, The Amusement Park may not be for you. However, if you truly appreciate movies that have a deeper meaning than what is presented, I implore you to take a look at this Shudder exclusive while it lasts. The Amusement Park gets five out of five stars from me. It’s a shame that it took 50 years for this flick to make it to the masses. But better late than never.