Preacher Does Some Soul Searching in Season 2 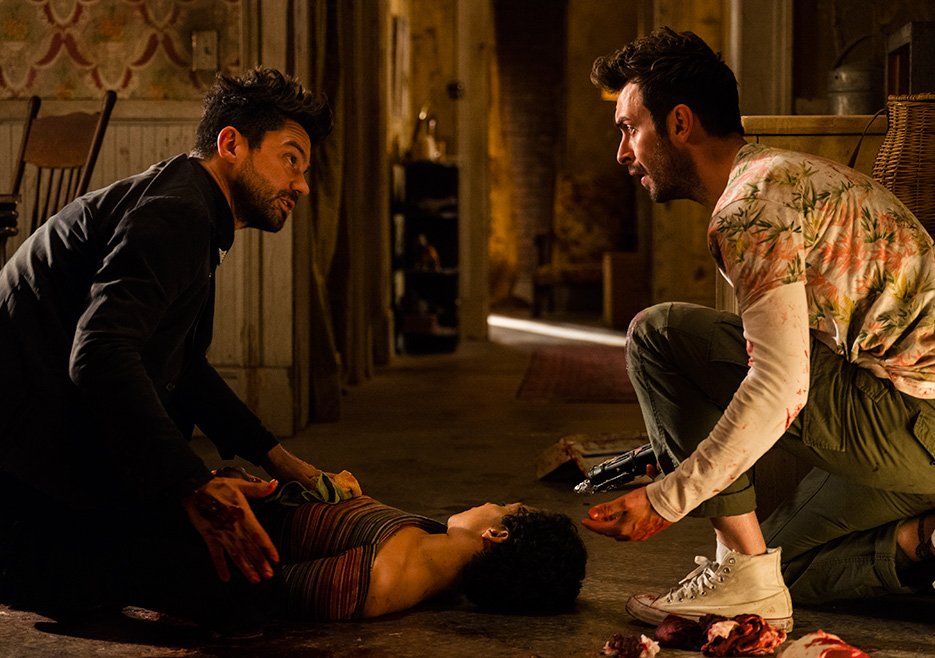 Jesse Custer’s journey, as a character on Preacher, has been an emotionally rocky road so far, but Season 2 of the AMC TV series has led him to New Orleans, where he seeks an audience with God, who has strangely gone missing. And that’s not even the most bizarre scenario taking place this season.

Darkly irreverent, sometimes hysterical and other times cringeworthy, Preacher is a TV show that perfectly personifies Executive Producers Seth Rogen, Evan Goldberg and Sam Catlin’s personality. In fact, on Talking Preacher, Executive Producer Sam Catlin admits the show got away with all the insanity and absurdity of Season 1 on the cable program without getting into trouble, so the storyline craziness was cranked up even more for Season 2. And, according to Chris Hardwick, “The show is so far out there — but also rooted in real, dramatic moments. I think of it as a live-action South Park.”

Prepare yourself for some eye-rolling moments. Here’s some highlights from Season 2:

“Preacher, we’re on our way to redemption.”

Dark secrets seem to be a repeating theme throughout the season. Both Tulip and Jesse keep them from one another, as well as Cassidy, which eventually reveal themselves in the worst possible scenarios. But with the introduction to The Grail (a shadowy organization that apparently has ties to all of the powerful leaders across the globe) and an unsettling graphic sex scene, we learn that Jesus’ 25th descendant (nicknamed Humperdoo) is protected by the group and in need of leadership.

Is Preacher sending mixed messages? What is it saying about Euguene/Arseface, who tried to live life by the Golden Rule, only to be sent to hell? Is living a soulless life practical? And how far is too far for this TV show to be considered sacrilegious?

This season, Cass was less outrageous and a bit too serious, at times. He can also basically heal himself like Wolverine, but it takes a bit of time. Tulip finally got a chance to face down her fears and nightmares, but was less playful. Jesse needs forgiveness for killing his father among (many) other things and is finally facing his fears by (hopefully) meeting God. The most interesting character had the least to do, acting-wise: The Saint of Killers got a brief backstory before his role quickly ended. Pip Torrens was the best actor, portraying the peculiar Herr Starr, who always chews every scene he’s in… in a good way. The series’ never-ending one-note scapegoat/joke involving the Armenians (who have been credited with killing Tom Cruise last season and Harry Connick Jr. most recently) is funny in a ridiculous way, somehow only appropriate on this series.

Until the last few episodes, the overall storyline of Season 2 felt like it crawled to a halt, with some episodes being excellent (those featuring the mysterious Saint of Killers) and those that were not (Tulip’s Fight Club storyline really went nowhere important). Jesse’s journey has been terrifying, but it’s nothing compared to his upcoming return home to Angelville, which will take place next year.

At the conclusion of Season 2, Jesse allows Tulip to die from a gunshot wound, Starr’s cancelled their ambulance, and a return to Angelville may bring her character back to life, possibly from voodoo. Will she become a Zombie? Hopefully this is not the end of the line for Tulip’s great character (and the incredibly talented actress), played by Ruth Negga.

Each of the three primary characters have their flaws. No one is perfect, which makes Jesse’s journey even harder, as he tries to do the right thing, while being an antihero at the same time. We’re really looking forward to seeing what Season 3 can bring for Preacher!