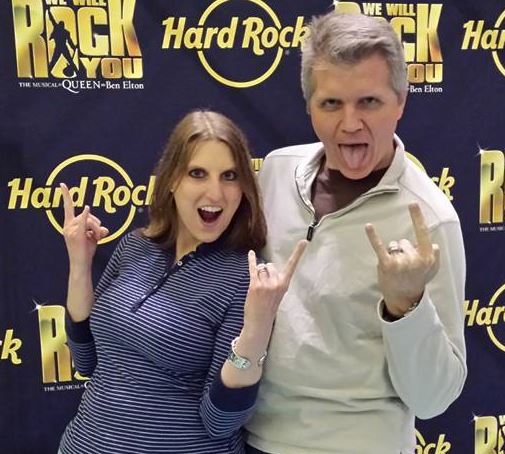 Per Matt
The geeks have spoken!

With the Geek Media Expo fast approaching (taking place on October 24 to 26), we interviewed Raymond Smotherman to preview the convention, discuss the Nashville geek scene and discover what influenced the creation of He Geek, She Geek.

How did you initially get involved with the Nashville geek scene?
– “As a Nashvillian born and raised and a geek all of my life, I guess you can say I’ve always been involved with the geek scene, even before there was such a thing. I bugged my older brother to drive me to The Great Escape every Thursday (yes, when I was a kid, new comics came out on Thursdays), until I was old enough to drive myself. My school was pretty small and even though I was the geek in my class, I was still liked enough that my geekiness was never a hindrance, so I never had to hide it. I just had to wait about 10-15 more years until geek became the new cool and there were more outlets to explore.”

What is your official title and role with GMX?
– “I’m the Manager of GMX Communications, which is a grown-up way of saying I get to be on Facebook and Twitter all day, chatting with fans of Geek Media Expo and the Nashville Zombie Walk (as long as my boss at my day job isn’t watching). My job is to distribute awesome news to everyone and get them all pumped up for the events. Unfortunately, that also means I have to deliver downer news at times. But GMXers are pretty non-violent towards me when that happens, which isn’t very often.”

How did you initially get involved with GMX?
– “I didn’t find out about GMX until the week of Vol. 4, when I found their Twitter account and saw all these awesome guests and events being talked about! It was too late for me to go that year, but I swore I wouldn’t miss Vol. 5. When I saw that GMX was looking for marketing staff in 2013, I knew that sounded right up my wife’s alley, so she went to the next volunteer meeting and got on board. I went to a meeting after that and volunteered for the videography staff, so that GMX, I spent all weekend going to panels and videoing them and all the crazed geeks.”

What kind of role does social media play for GMX?
– “Although we do have email addresses for all the departments publicized on the GeekMediaExpo.com site, the majority of communication actually comes to Facebook, Twitter, and to lesser extent, Google Plus. So, a lot of the time, I’m kind of a switchboard operator, trying to find which staff member is best suited to answer the questions and then trying to get back to the questioner in a timely basis. Let me take this time to thank the Facebookers and Twitterers for realizing that there is a human being on this end of the computer and I’m hoping to help out any way I can. But besides answering questions, social media is also the fastest way of getting new information out to the most people at once. There are over 15,000 Facebook followers of GMX and Nashville Zombie Walk combined, so having one portal that can get to all those people at once and then have immediate feedback from those folks is really helpful when it comes to making the events better faster.”

How are you spending your time at GMX?
– “Last year’s GMX vol. 5, I spent the weekend with a video camera getting footage of all the amazing stuff. I was a first-year position because, having never been to a GMX, I was able to do all the things while still being a productive volunteer! This year, I’ll be watching the Twitter and Facebook feeds and trying to get a feel for how things are going, based on what I see there. I have a sneaky suspicion it’s going to be awesome.”

Will you be moderating any panels this year?
– “Yes! I’m very excited to be hosting GMX’s first-ever? Geek Photo Scavenger Hunt (brought to you by HeGeekSheGeek.com)! Each day, up to 10 teams or solo acts will be able to compete for a fabulous prize by snapping pics on their phones or cameras of geeky things around GMX. I’m nervous about it, but can’t wait.”

If you could give any bit of advice to upcoming GMX attendees, what would it be?
– “Get a room! Especially if you live more than 30 minutes away. Last year, my wife and I drove 40 minutes each way, each day to the Marriott. That’s over an hour lost every day! Once we found the analog gaming room, we never wanted to leave, but our bed and our dogs were on the other side of the world, basically.”

“Speaking of the gaming room, last year I learned one other piece of advice: don’t be afraid to talk to strangers, at least in this case. I am, for the most part, an introvert and often socially awkward. But in the gaming room, everyone was so welcoming! As soon as we walked in, a group playing Cards Against Humanity invited us over to join them, and we had a blast meeting new people and saying the most embarrassing things in front of strangers! That’s the great thing about GMX. We’re all geeks about something and have all probably been shunned for it or ridiculed, even. We all know where you’re coming from! So, take a chance. If you’re standing in line for a panel, don’t just stare at your phone. Talk to the cosplayer next to you about their costume. Find out what that guy bought in the dealer room. Ask about someone’s favorite guest. You’ll meet some amazing people!” 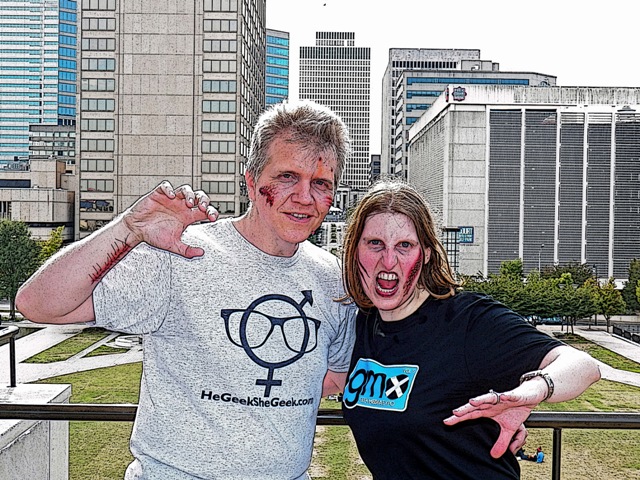 What are you looking forward to the most at GMX 2014?
– “Other than the sure-to-be-awesome scavenger hunt? Probably the cosplay contest and getting to see the friends we made last year and haven’t seen in a year, now!”

What direction would you like to see GMX social media go in the near future?
– “Up! 🙂 We are all volunteers at GMX, which means we all hold down day jobs and then devote the rest of our waking hours to making GMX the awesome thing that it is. But if there were some way of making this my full-time job, I’d jump on it in a minute! (My day boss isn’t reading this, is she?)”

Since GMX is a part of ArtsCubed, is it possible to have a singular place for all your social-media needs?
– “A good place to start would be bookmarking artscubed.org, which has links to GeekMediaExpo.com, TheNashvilleZombieWalk.com, and MTAC.net. Then those sites have quick links to the social media outlets for each.”

Will there be any future giveaways or contests involving the GMX social media?
– “Well, until Oct. 15, everyone that pre-registers for GMX is entered to win a pair of tickets to see Evil Dead the Musical courtesy of the Tennessee Performing Arts Center! Earlier this year, we gave away movie passes for signing up for the GMX newsletter, a Boxtrolls swag bag, and other cool stuff. You just have to keep watching!”

How was your experience with the Nashville Zombie Walk this year?
– “I’m not going to lie; I was a bit nervous. We had to change the route a couple of times. We were warned about messes made last year. And then the rain! But you know what? It turned out to be the best walk yet! We had a great turn out despite the weather, raised a half ton of food for the Second Harvest Food Bank, and our Zombies were totally respectful of downtown Nashville and it’s guests and businesses. And because of how great things went this year, we have some awesome new things in mind for next year. Hopefully, it will be more than a walk… but I can’t say any more, for fear of bodily harm from Ashley and Brenda, the head Zombies in charge.”

You’re one half of the power couple who runs He Geek, She Geek. What influenced you to start the Webpage?
– “We’re a power couple? Like the Wonder Twins? Form of a bucket of water! Hey, it worked! Wait, that’s just sweat. We started HeGeekSheGeek.com because we wanted an excuse to see more movies. Really! We’d get free passes where we could find them, then do his-and-her reviews about them.”

“We started off doing movie reviews, but as we found our footing, we began to report on conventions, cosplay, and even got to do some cool interviews like with Joyce Giraud from the cancelled-too-soon Siberia and VO actor Phil Lamarr. A couple of years ago, our little blog even caught the eye of Chevrolet, who sent us down to South By Southwest to be part of their ‘What Drives You?’ event and raised money for three school classrooms on our way. It was a blast.”

“I really love to report on cosplay; that’s what readers tend to flock to most. But on our Facebook and Twitter feeds, I try to link readers to the biggest geek-culture news of the day, from various sites around the Internet. We find the news, so you don’t have to!”

What future direction would you like to see the Nashville geek scene go?
– “I think it’s really going in the right direction. It’s just a matter of getting Nashville to accept the fact that geek culture is just as much a culture as anything else. And right now, ArtsCubed has made some powerful friends with The Frist Center and TPAC, who are willing to back us up on that. The geek scene is growing and there’s no stopping it. Why would you want to? Look at all the fun we have!”

Is there anything else you’d like to add?
– “I just want to express how awesome it is to be a geek! This is the time we’ve been waiting for. Come out of the comic-book store and be counted!”