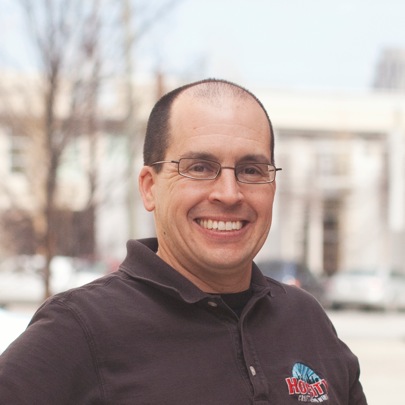 Per Matt
What’s it like, to be the Chief Hop Head?

Every time I visit Atlanta, whether it’s for Momocon, Dragon Con, Walker Stalker Con or to visit family, I always make sure to visit Hop City to fill my growler and to find out the latest national and regional developments within the craft-beer scene. Kraig Torres is the Chief Hop Head (aka Founder) of Hop City, who knows a thing or two about craft beer. His package store has more than 1,900 different beers in stock at all times (including 80 or 90 gold-medal winners each given day).

His personal philosophy? “Every beer has a place for somebody.”

In my interview, we discuss the latest craft-beer trends, drafting the store’s expansion plans, picking the perfect pumpkin beer and creating a portable growler-filling station!

What inspired you to create Hop City?
– “Well, I’m a beer fanatic, have been a beer fanatic for years and years. I was in the Coast Guard, right out of high school, back in the ’80s and discovered that beer from all over the world is better than the beer that I had at home and started keeping a log of beer. The next thing you know, I got up to two or three hundred beers and then it got up to three and four hundred beers, and so forth.”

Where was your home, initially?
– “New Jersey, so my first craft beer was probably Moosehead, back when I was 16. That tasted better than the other stuff people were drinking. Pete’s Wicked Ale was probably my next, big favorite, and then it was, really, a downhill slope.”

How many beers did you have on your list before you decided to build a package-store empire?
– “I think, at the time, I was probably pushing 5,000. I thought, ‘It would be cool if I could make a job at this.’ I had just sold a different business — one that I was good at, but I didn’t have the passion for. Then I started a business plan do do this.”

Where did the name, Hop City, come from?
– “I was a homebrewer and hops are, obviously, an integral part of almost every beer that you brew. That was, really, the inspiration.”

Has your store always been at this location?
– “Yes. So, we opened Hop City in Atlanta on the West side, back, a little over five years ago, in April of 2009. We’ve expanded, since then, into a larger space, but the first spot is still the same first spot.”

Initially, was the store’s focus to promote homebrewing?
– “No. It was focused on beer, wine and homebrewing. That has, really, always been our footprint. Homebrewing was incidental, because I’m a homebrewer. I thought, ‘Maybe someone else needs supplies, other than me.’ I was really surprised that it has been a pretty consistent 15 percent of our business since we opened the doors.”

What would you say is the most-often bought homebrewer ingredient?
– “We sell a lot of grain, a lot of hops and a lot of yeast.” 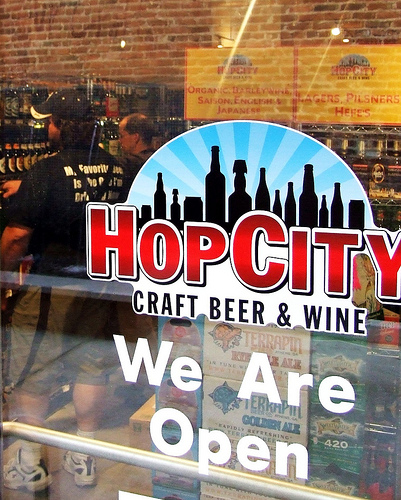 What kind of trends have you noticed for craft beers?
– “Every year, we pick a different trend, what we think is going to be hot for the next year. This year’s trend is what we started to see pop out last year, which was the session IPA. Now, everybody’s got a session IPA. There’s probably 20 or 25 different ones in the store. Next year’s hot trend is gonna be the mild sour.”

“Last year, we saw the Gose from Westbrook. I would say it was one of our Top-10 sellers, even though we had it in fairly limited quantities. Every time I got 25 more cases in, it was sold out within a week. Anyway, long story short, we saw two or three. Next year, you’re going to see 20 or 25 of those.”

Every time I visit your store, I’m always asking if you have a sour beer on tap.
– “We typically don’t. We don’t mind if it’s an inoculated, pasteurized sour, because that won’t affect our beer lines. But, traditionally, we have avoided live sours, because we’ll have to throw all those lines out, as soon as you finish with that sour. The danger, of course, is not just that I have to throw out those beer lines, but that it also infects the neighboring beer lines and before you know it, I’m replacing all the plastic.”

Do you reserve a certain number of taps for local breweries?
– “Both of our stores keep 20 taps for local beers. That’s sort of our thing, and they’re constantly rotating. There are several brands, here, in Atlanta. Sweetwater is our largest, local brewery. They have four or five different beers on tap. Everything else rotates.”

Will you have Orpheus on tap?
– “Absolutely. Jason Pellett is a dear friend. He was one of my homebrew customers, for five years. We’re happy that he’s out on his own, doing his thing, now.”

“In this market, alone, I have eight former homebrew clients who own breweries. That is super rewarding. It’s like my kids have grown up and gone on to good, fun things. He’s one of them.”

What are some of your favorite beers?
– “That’s a good question. At this point, I’ve tried more than 8,600 beers. I try to have a different beer, every day. That’s one of my personal goals, in life, so it’s hard to play favorites when you’re trying something new all the time. I will say, categorically, I love Belgians and I love IPAs and I love bourbon-barrel-aged beers. If I have to name a favorite beer, it’s Allagash Curieux. It’s a bourbon-barrel-aged Tripel.”

Being a dark-beer fan, do you see a trend of beers getting hoppier?
– “That’s a 15-year trend, I don’t know if that’s a recent trend. I will say that having friends who are brewers, a lot of those people who have in the past done a year-round dark beer or seasonal dark beers have kind of narrowed their range when that beer comes out. For instance, Jailhouse Brewing Company, in our market, just discontinued Breakout Stout, as a year round, in part, because in the summer, they lose those shelf spots.” 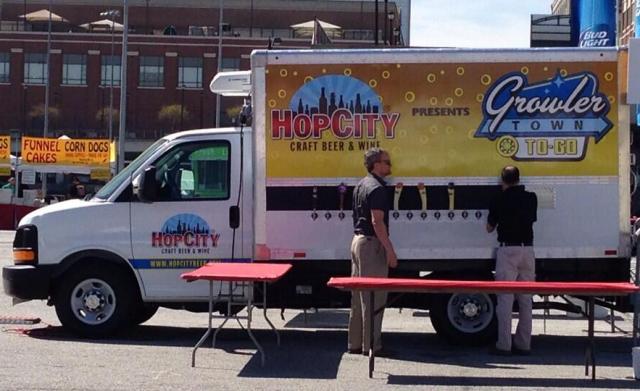 Let’s talk about pumpkin beers.
– “Virtually no one uses real pumpkins in their beers. You want to release them by the end of August, for them to be new or first to market. There’s nowhere in the world where pumpkins are ready in August. It’s just not possible. They’re all using extracts or flavors. It’s unfortunate, but you can still taste some really good pumpkin beers with extract. That doesn’t preclude you from making a good beer. There are a handful, out there, that still do real-pumpkin beers. People like Rogue and Great Lakes, but they’re harder and harder to find.”

“Now, everybody is doing a pumpkin beer. It used to be, there were five really good ones, but now there are, literally, hundreds and hundreds of pumpkin beers. My best seller is also probably my favorite: the Southern Tier. It tastes like pumpkin-chiffon pie with a graham-cracker crust.”

How did you decide to expand into Birmingham?
– “We knew we wanted to open a new store and I assumed it would be in Georgia or some place closer to home. Actually, it was Octane Coffee who talked me into checking out Birmingham. They were in the process of opening a store, over there. I was shocked there were no retailers focusing on craft beer, whatsoever. There was a definitely a loyal, albeit small, group of craft-beer fanatics, but they just did not have a place to buy beer. So, they needed us. That’s the simple answer.”

Visiting Birmingham, there’s quite a few breweries located near the store.
– “When we moved it, there were only two breweries in town. Now there are five. It’s also rewarding to have that happen. We’re, literally, almost equidistant from all the breweries. It’s fantastic.”

You’re also opening another Hop City store in Inman Park.
– “We try to open a new store every year and a half, or so and it was time. The Inman Park store is going to be in the Krog Street Market. It’s got six anchor restaurants — all under one roof — and Hop City is the seventh anchor tenant. There’s an interior food court with 13 different stalls: all really good, gourmet food. Because of an anomaly in Georgia law, we’ll be able to sell, by the glass, for that entire interior food court. It’s going to be pretty awesome.”

What other developments has Hop City been involved with?
– “It’s been a busy year. We’ve launched a new initiative, it’s our Growlertown To Go trucks. It’s 30 taps, on a truck, that’s perfect for festivals and holds about 60 kegs. Literally, we rent it out almost every weekend, but it’s coming soon, to a festival near you. It’s a great way to get craft beer at a festival, that in the past may have only featured macro beers.”

“So, we have the trucks, we have the new store at Inman Park, I have a new store opening right around the end of the year in the Auburn, Alabama area, so that’s exciting… we have a lot going on. And then every year, we are the beer providers for the Taste of Atlanta festival.”