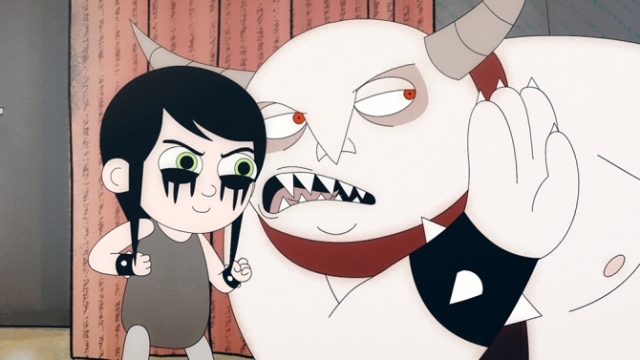 Graduating from FOX’s ADHD and moving into primetime, Golan the Insatiable looks to hook viewers as it moves into the network’s Sunday-night lineup, along with The Simpsons and Family Guy.

Previously airing on FOX’s Animation Domination High-Def late-night programming, Golan has gotten a new voice cast as it expands from a 15-minute show to a 30 minute program. Based on the online novel by Joshua Miller, as well as the ADHD TV series, this offbeat animated program focuses on a darklord (voiced by Rob Riggle), who is banished to Minnesota and befriends a 9-year-old goth girl (voiced by Aubrey Plaza). Together, Golan and Dylan cause a whole lot of mayhem in this small town.

Golan continues to confuse Dylan for a boy and the demon cries out of his nipples… to say this show is weird is an understatement. There’s lots of quotable one-liners, although an ongoing gag involves Dylan not having a father (most likely to be continued with each episode, never being funny). It’s ridiculous, but funny, never truly going over the top. The entire show feels like it would be more at home airing on Adult Swim, which is a compliment.

There’s all sorts of “Minnesota nice” going on here and no one seems to notice (or do they actually care?) a 10-foot demon is running around town. How long can these ridiculous jokes keep me laughing? Hopefully throughout the TV show’s entire first season.

Strength: Ridiculous premise that’s ridiculously funny.
Weakness: Everything seems to be happening in a Bizarro world, but that’s OK.
WTF Moment: We need more from the ancient book of spells, not just page 36!

Notable Quotes:
– “Am I in the all-jerk dimension?”
– “If it’s on a t-shirt, it must be true.”
– “Friends? That freckle-faced hooker is my mortal enemy.”
– “Dylan, rubber bands are used for bunching asparagus, only.”
– “You know, profanity is the last refuge of the inarticulate!”
– “Did somebody say something about strawberry Toaster Strudels?”
– “I found this grotesque book that speaks to my dark soul and I summoned you.”