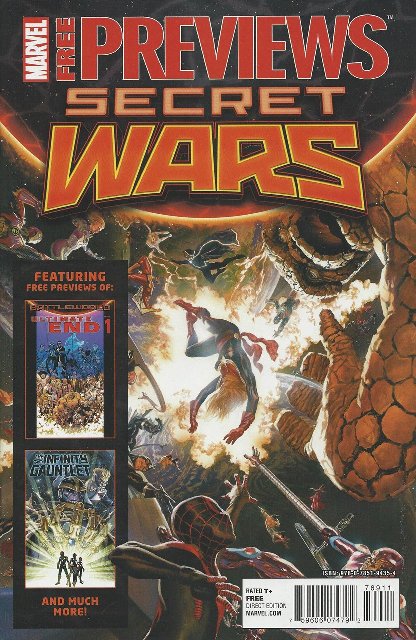 For good or for bad, Marvel’s Secret Wars will reshape the Marvel Universe, once again.

From the liner notes of Marvel Free Previews Secret Wars: “The Marvel Universe is no more! All that exists is a single titanic patchwork planet — Battleworld! The Secret Wars are waged across the fragments of hundreds of devastated universes during the explosive events of the core Secret Wars series!”

– In the first-issue of Secret Wars: Battleworld, Frank Castle is possessed by the soul of Doctor Strange. So, can we expect some magical violence? Definitely. The Infernal Four (demonic versions of Ghost Rider, Hulk, Spider-Man and Wolverine created by the Hounds of Limbo) seek to bring justice to The Punisher. Does anyone actually think Doctor Castle will allow these undead enemies to capture him alive?

– The preview for Battleworld: Ultimate End #1 features a silent Frank Castle watching Spider-Man battle five female superheroes who may or may not be under the influence of Hydra brainwashing. The artwork of this preview is incredible, not to mention an early black-and-white two-page spread of what looks to be every superhero within the Marvel Universe lunging into a super-huge fight.

– With Inhumans: Attilan Rising #1, a ragtag group led by Ghost Rider is dispatched to Greenland for giving all the raging Hulks their minds back. Seems like a mission impossible. Just another day for the Inhumans.

– Secret Wars: Journal #1 seems to be an old-timey tale. Two chests of jewels were stolen from the Duke of Westchester and The Punisher Sheriff has arrived to reclaim it, with some assistance by his magic orb and some treasure hunters.

– Old Man Logan #1 looks brutally gory. A well-worn Wolverine battles some thugs and may have killed Daredevil in the process…

– A battle is brewing in Inferno #1. Demons battle Professor X’s mutants and it seems Firestar might just have the answer…

– Where Monsters Dwell #1 seems to be a time-travelling tale that showcases a pair of barnstormers who are attacked by dinosaurs!

– Planet Hulk #1 may possibly feature a mashed-up Avenger, a dinosaur and a tricky getaway plan.

– The Infinity Gauntlet #1 looks to have an invasion of insectoid monsters attacking Nick Fury and his friends.

– A-Force #1 only has a few panels of incomplete art and M.O.D.O.K. Assassin #1 shows the killer mental organism designed on a rampage.

As someone who hasn’t kept tabs of the Marvel Comics Universe for a very long time, you can correctly assume that many of these stories flew far over my head. A few of them really grabbed my interest, but the rest felt like filler secondary stories. There are many crossover characters, storylines and titles featured in this collection. Quite a few of them look to become successful. I can only guess that Frank Castle and Ghost Rider will make more than a few appearances integral to multiple overall storylines. Plopping Deadpool into the middle of the action seems like a funny choice (in more ways than one). Clearly there are characters here that I’ve never seen before and with six of the 13 stories being “silent,” some succeed in grabbing my attention, while others won’t.

All of this, of course, is yet another retcon that the comic-book industry is fond of doing every so often, so they won’t write themselves into a corner. What will become canon and what will be ultimately rewritten? Only the future will tell…

In what has become the battlefield where Marvel Comics unfolds The Secret Wars and DC Comics unveils The Convergence, many questions remain unanswered. The only one that seems definite is that comic-book fans will spend quite a fortune in trying to uncover the answers for each.

Strength: Quite a few interesting storylines…
Weakness: More than a few storylines that fall flat within two pages.
WTF Moment: What exactly is a Sand Hulk?

Notable Quotes:
– “Do not pee in the Cheerios of godlike entities.”
– “The world of tomorrow is as good a place as any to die.”
– “Under the twisted hands of Battleworld is no way to live.”
– “And if I do say so myself… those were some impressively big balloons.”