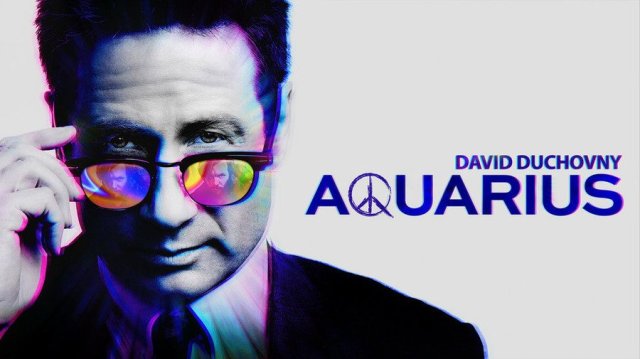 David Duchovny returns to network TV (and prepares for The X-Files) as a ’60s detective in Aquarius.

Detective Sam Hodiak (Duchovny) may have bitten off more than he can chew. Working on a missing-persons case in Los Angeles of 1967, he crosses paths with Charles Manson while searching for a teenager. But it’s complicated (isn’t it always?). The young teenager’s father has strong political connections, so the case can’t be on the books. But it also seems this father might have more than a few skeletons hiding in his closet, as well.

Forming an uneasy partnership with Detective Hodiak is undercover hippie Brian Shafe (Grey Damon), who hopes to infiltrate Manson’s group. Duchovny’s detective is a little more by the book than Mulder ever was, but he doesn’t exactly play by the rules, either. Many scenes offer a good-cop-bad-cop vibe as the good guys hunt for the man who preys on a stable full of underage women. While the subject matter actually happened before my time, it feels like a current-day procedural based in a different time and place, like a Law & Order or C.S.I. series.

As listed on the world premiere episode: “Inspired in part by historical events, this program contains fictitious characters, places and circumstances.” While the names may have been changed, the two-hour premiere was still difficult to watch at times. In addition, there’s plenty of civil unrest and protests scattered about, but I’m not sure how much is actually true in this series (other than the name, Charles Manson). Nothing is really bad, other than a dated premise that’s a tad bland, but it’s not super interesting, either. It’s great to see Duchovny back on the beat during the summer of love, but it kind of romanticizes Manson, who is an actual, living murderer. That is not good.

Aquarius has a first-season order of 13 episodes, which are creepy, to say the least. As a life-long fan of David Duchovny, I can safely say there are many Easter Eggs hidden throughout the first two episodes. At one point, he picks up a guitar (in real-life, the actor plays the instrument and just released his debut album, Hell or Highwater).

Although The X-Files’ return was only recently announced, Duchovny seems to be feeling his way back into the FBI with this series. He’s taking baby steps as a detective and in less than a week, he’ll be back on set to film The X-Files. Can’t believe it’s been 13 years since the spooky series ended. Venture into Aquarius (as well as Hannibal) to see the former X-Files leads tackle separate subject material side courses, then return for the main course next year when they’ll reunite once more!

Strength: Duchovny’s back on the beat!
Weakness: Creepy subject material (in a bad way).
WTF Moment: Detective Hodiak is no Fox Mulder, to say the least.

Notable Quotes:
– “Charlie gets the girls.”
– “The pig wants what the pig wants.”
– “Don’t touch me unless you love me.”
– “There’s crazy whispers in the concrete.”
– “You see, the snake eats the world. We eat the snake.”
– “We’re special. We’re powerful and we can change the world.”