Good Boys is Superbad For Tweens 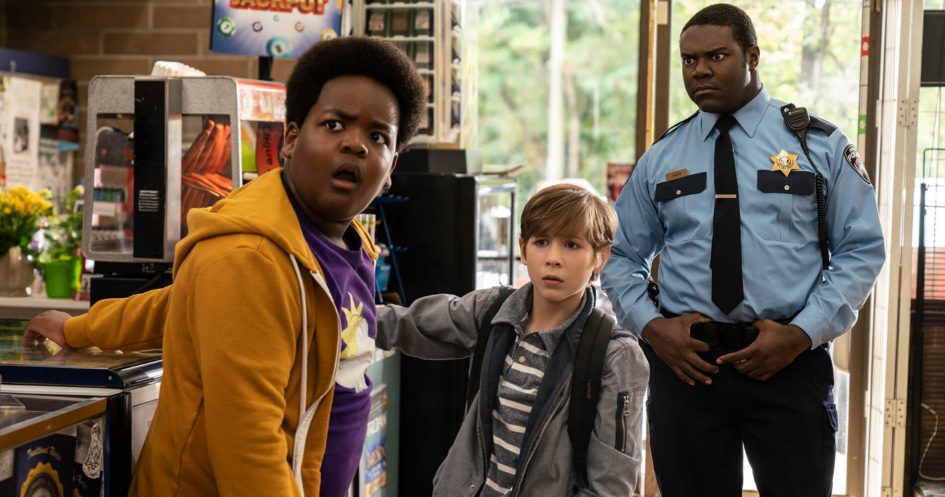 Per Matt
What does a missing drone, stolen illegal drugs and a kissing party have in common? Each one involves the Beanbag boys, who star in the hilarious, raunchy comedy, Good Boys.

And they are good… to an extent. Sixth-graders Max (Jacob Tremblay), Thor (Brady Noon) and Lucas (Keith L. Williams) just want to fit in with the cool kids at their school, but it seems this by-all-means-necessary attempt at social climbing escalates on an epic day of bad decisions. It’s absolutely Superbad for tweens — even though that audience is not old enough to watch the film — and I enjoyed every second of it.

The adolescents’ misunderstanding of adult situations and lost innocence really create humorous situations for these characters, who seemingly go out of their way to curse like sailors, but each one really has a heart of gold. Thor’s passion is singing. Lucas is an avid rule-follower, in everything he does. And Max is totally infatuated with Brixlee (Millie Davis), so getting an invite to his first-ever kissing party has turned his anxieties upside down as he’s never experienced his first kiss. Trying to get more information on the topic, the trio’s journey on a slippery slope of descending decisions creates one outrageous situation after another, each one full of laughs.

As an ensemble, each young actor pulls their weight equally, but Keith L. Williams brings the most heart and soul to his character, crafting a believable — if a bit naive — performance that was tops in my book. Equally satisfying were the teenage girls who terrorized this troupe, Life of the Party’s Molly Gordon and Ocean’s Eight’s Midori Francis. Although they didn’t have a lot of screentime, their cruel treatment of the tweens was a hoot.

After laughing at the movie’s trailer multiple times and seeing that this film was brought to life by the same people who created Superbad, Pineapple Express, Sausage Party and Neighbors, I wrongly expected that Evan Goldberg and Seth Rogen had written and directed this project. Actually, they only produced this one, with Gene Stupnitsky (along with Lee Eisenberg) being credited as the primary writers, directors and producers. Other than being a writer-producer-director on The Office, I really didn’t know what to expect from Stupnitsky, but after watching Good Boys, I can really appreciate this filmmaker’s style. I was afraid the primary storyline would wander off after 15 or 20 minutes, focusing more on the children being as nasty as they wanted to be, only to create shocking laughs. I was pleasantly surprised this wasn’t the case and each of the callbacks were incredibly funny, as the school-play finale definitely brought down the house.

Only 90 minutes long, Good Boys feels like a really short movie, but it packs a LOT of laughs. So, what’s next for these characters? Could there be a spin-off in the not-too-distant future, featuring Gordon and Francis? If written right, it could crafted as a Superbad for women, leading to a raunchy comedy featuring situations not normally written for females. If the same behind-the-scenes crew considered returning, I’d gladly watch it. But there’s definitely gotta be more appearances by the Beanbag Boys.