Guest Review: The Wolf Among Us – Smoke & Mirrors 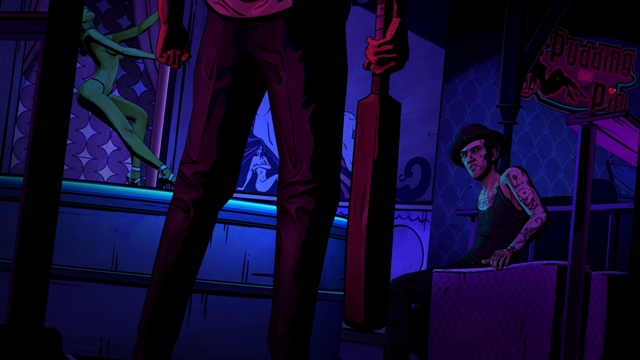 Once in a while, we will post guest reviews. This month, Adam Pewitt, co-host of The Adam and JP Show, gives us his review to the video game The Wolf Among Us: Episode 2 – Smoke & Mirrors.

(NOTE: You should play The Wolf Among Us: Episode 1 before you read this review.)

Telltale Games. This company knows how to make a video game. While they may fall short in the technical specs and graphics department, Telltale Games more than compensates with their engaging writing and immersive universes that they create. Their latest game, The Wolf Among Us, is based on Bill Willingham’s Fables comic book series.

Fables takes characters we have known since childhood and brings them to life in the modern world with not-so-kid-friendly results. Released in October 2013, The Wolf Among Us: Episode 1 was a success. Critics loved it, fans of the comic series loved it and gamers who had never even heard of Fables loved it. Bigby Wolf, known in his younger years as The Big Bad Wolf, is the main character in this series of tales and justifiably so. Oddly enough, there was almost a four-month gap between episodes 1 and 2 of this new franchise, from the makers of 2012’s surprise hit, The Walking Dead. The wait is over, but was it worth it?

At the end of Episode 1, Bigby had just shockingly caught a glimpse from the murder scene of Snow White. Episode 2 lets us deal with the aftermath of that discovery and continue on Bigby’s path, to find the serial killer, before he takes out more Fables. The opening interactive scene tasks Bigby Wolf with interrogating Tweedle Dee. As you can imagine, you, as the player, are given total control of the situation. Do you want to play the nice cop and just talk it out with Tweedle Dee, in hopes that he’ll spill the beans, because of your gentle demeanor? Go ahead. Maybe you want to go in with the proverbial guns a’ blazin’ by trash talking Dee and smashing a bottle of liquor over his head. All of these options are available, but be warned: these decisions you choose will make a difference in the future.

The interrogation scene ends with the first major twist of the game. Then… the opening credits? Telltale Games has a knack for that type of thing. Where most developers will save a shock for the ending or at least somewhere near the end, we are exposed to a huge curveball that sets the whole episode up in a state of confusion. Some may ask, “Why do this?” Much like the grade-school game where you are tasked with placing your forehead on the butt of a baseball bat and spinning 10 times BEFORE you run in a straight line, it’s just more fun this way. After playing through the first episode of this game, we believe to have a grasp on its reality and rules. Why not start this new episode off in a state of vertigo?

While the majority of characters you met in Episode 1 make a return, you get to delve deeper and learn a bit more about a select few key players. The character development, seen in games like this and The Walking Dead, is what makes Telltale Games one of today’s most-talked about game studios. Most noticeably, the intensity of Bigby Wolf only intensifies. If you enjoyed his metamorphosis to his true form in the earlier episode, you just may get to see him repeat that performance when he gets caught at the wrong place at the wrong time.

In a way, The Wolf Among Us Episode 2 is tastefully bookended by shocking moments. You may have seen one of these plot twists coming by a mile, but that doesn’t make it any less important. As much as I can go on and on about the masterful storytelling in this game, the frame rate hiccups are just too much to endure sometimes. One would think with the major delay between Episodes 1 and 2 that these graphical limitations would be fixed or at the very least minimized. The sound drops in and out, load times are terrible, and some of the most important Quick Time Events of the game are almost ruined by the terrible frame rate-induced lag.

With all of that being said, it says something about this franchise that I am salivating at the chance to play Episode 3. Let’s just hope we don’t have to wait another four months to experience it.