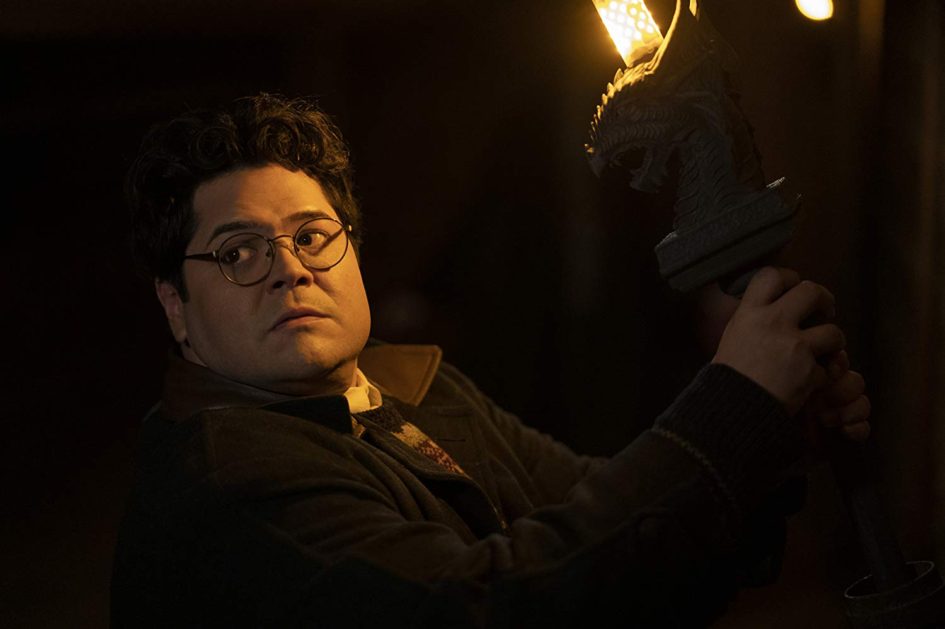 One of the highlights of What We Do in the Shadows first season is the long-suffering vampire familiar, Guillermo (Harvey Guillen). © Copyright 2019, FX Networks. All Rights Reserved.

The bell tolls for the unnatural order of What We Do in the Shadows. At the conclusion of the show’s season finale, the audience has learned a lot about this group of immortals… but the most interesting character of them all seems to be Guillermo, the vampire familiar.

Season 1 introduced us to Nandor the Relentless (Kayvan Novak), Laszlo Cravensworth (Matt Berry), Nadja (Natasia Demetriou), Colin Robinson (Mark Proksch) and Guillermo (Harvey Guillén), the human tasked with the thankless job of serving, assisting and protecting these nightmare creatures throughout their adventures. Whether it’s cleaning up yet another bloody mess, doing their laundry or other mindless tasks throughout the daytime hours (as well as the numerous unspeakable acts after the sun sets), his sympathetic portrayal has been a highlight in the first season of this TV show.

And the season finale revealed a stunning twist, that the long-suffering familiar, who has been constantly promised to be turned into a vampire, was actually related to Abraham Van Helsing, the famous vampire hunter. And as he continually gets mistreated and doesn’t get his wish granted, the likelihood that he will turn on his master in future episodes seems very high. Now that’s some good tension and drama set for Season 2, which has already received the green light! For a season that only airs 10 total episodes, the series packed a lot of stories and jokes into each 30-minute episode.

Three episodes were incredibly funny and enjoyable, including one that involved a romance/conflict between an emotional vampire and an energy vampire (“Werewolf Feud”), the introduction of the Vampiric Council (“The Trial) and family revelations (“Ancestry”) that will definitely impact the future of this series, which is based on the meta, self-aware mockumentary feature film of the same name from Jemaine Clement and Taika Waititi.

So, what’s next for these low-key, passive-aggressive vampires? Despite their lack of willingness to bring their killing, pillaging and torturing ways into a new millennium for the New World, will any other undead old-school creatures try to encourage them to change their ways? Will there be more “gang-war” violence vs. the local werewolves? Will we learn more about Nandor’s homeland, Al Quolanudar? And how many great guest stars will return for more than just cameo appearances?

The rules that Clement and Waititi have created for these characters are fun to follow and for the most part, the TV adaptation feels similar to the feature film, but veers away to create its own path. While Taika was off building the Marvel Cinematic Universe (Thor: Ragnarok), Clement was busy bringing this series to life via basic cable. It’s no wonder the best episodes feature both of these filmmakers working together, once again. Hopefully, there will be even more opportunities to see these guys working together in Season 2, which will debut in 2020.