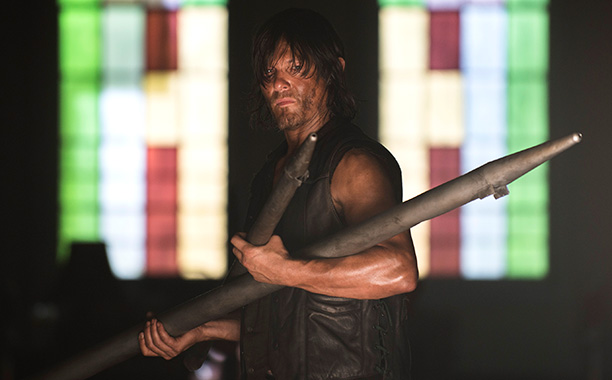 It’s time to catch up with The Walking Dead!

With so many events packed between Halloween, Thanksgiving, Christmas and New Year’s Day, would you believe I’m finally catching up on missed episodes of The Walking Dead? It’s been so long since I’ve seen an episode, I’d forgotten Sam’s name… again.

Thank goodness for The Walking Dead Marathon to help me pick up where I left Season 5. After leaving Terminus, where will Rick’s Gang land?

Strangers:
Back to living in the wild, Beth is still missing, Michonne’s lost her katana, Rick apologizes for abandoning Carol and Father Gabriel Stokes is introduced. Oh, and by the way, there’s cannibals hunting down Rick’s Gang, one by one, in the woods.

Four Walls and a Roof:
The Termites are back. Having caught and maimed Bob, they found out too late they’re eating tainted meat. Too funny. Rick’s Gang spends the rest of the episode plotting and getting revenge. Michonne reunites with her sword and becomes a Bad Ass, once again. Half of the group takes the short bus to D.C. while Rick and the others stay behind. So much for sticking together.

Slabtown:
So, Beth gets a solo episode. Boo. But it’s featuring a good cop vs. bad cop and a demented doctor. I’ll stick around for a little of this, but not much more.

Self-Help:
The short bus is en route to D.C. until it wrecks, sending its travelers on foot, once more. After breaking into a book store, the show quickly turns into Fahrenheit 451. Then, Eugene finally reveals the truth: He’s no scientist. Finally. Thought they were gonna drag this tidbit along for another season.

Consumed:
On this episode of the Carol and Daryl Show, the survivors follow a car into downtown Atlanta hoping to find Beth, get robbed by Noah then return the favor. Then Carol is run over by the crooked cops and taken back to Grady Memorial Hospital.

Surprise of the episode: Daryl lights up a Morley cigarette, which means The Walking Dead and The X-Files are based within the same universe. Can’t wait for the cross-over episode!

Crossed:
After joining forces with Noah, Daryl reunites with the remainder of Rick’s Gang and they plan on rescuing Carol and Beth. Rosita finally gets some face time, which is welcome. Shocking it’s the first time since she joined the group to actually be featured. Hope there’s many more opportunities. Predictably, one of the two hostages escapes.

Coda:
And here we are, at the Midseason Finale. Things have gone downhill quickly. Bob 2 was quickly killed, but there’s no reason Rick shouldn’t have taken his armor before the undead ripped him to pieces. Makes no sense. Regardless, Father Gabriel almost lost the church, a mini mutiny broke out at the hospital, the D.C. crew unites at the church and Beth bites the big one during the prisoner exchange. Bummer.

Not so much of a bummer: Morgan has finally made it to the church! To be continued on February 8th…

These seven episodes were pretty good, for the most part. Some of the episodes had slow stretches and were a tad boring, but the show finally picked up the pieces by the Midseason Finale, as usual. Terminus, as a storyline, had a lot of build up, only to be destroyed within one episode. What’s up with that? At least we got a few episodes of the crazy Termites. Those were some crazy fools!

Speaking of crazy fools, the new characters introduced at Grady Memorial Hospital were complicated, to say the least. The cops were clearly crooked, but there’s no chance of surviving the Zombie Apocalypse without being a little crooked, right?

I have a feeling the semi-good doctor will return with the group, but I’ve been wrong before. I also think Morgan won’t be waiting for Rick’s Gang to return, hitting the road to D.C.

As if using the comics as a field guide, there’s many different directions the TV show could go next. My best bet: Rick’s Gang will soon hit the road (possibly to D.C.) and find the gated community, Alexandria. The next-best bet: the group meets Jesus, aka Paul Monroe, and eventually locks horns with Negan by the end of the season.

Also noteworthy: By the end of Season 5, there’s a slight chance of seeing a built-in spin-off episode, used to introduce the characters of the upcoming spin-off series to The Walking Dead, which will air next year on AMC. Supposedly, it’ll follow a new cast of characters in Los Angeles and will even take place during the Zombie outbreak. That’s definitely something we’ll be very interested in seeing!

Strength: Rick’s back, better than ever.
Weakness: So many separate storylines. Please reunite the group, already.
WTF Moment: We’ve got a new word for Zombies: Rotters.