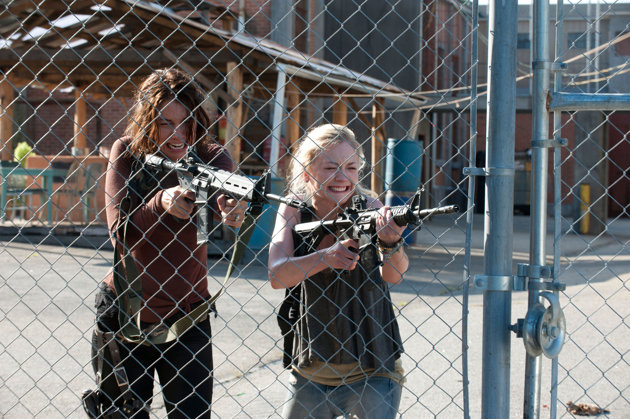 Season Four gets partially wrapped up…

Who knew so much could happen in five episodes? Like a crazy person, I waited (and attempted to avoid all spoilers… unsuccessfully) to watch all five of them (along with four episodes of Talking Dead) in a monster-marathon session! A lot has happened since our last summary episodes of The Walking Dead. Let’s get right to it…

Indifference – 11/3 – #WeAllChange
Rick and Carol “Don’t Call Me Mom” scout for food while Daryl’s group is still out, trying to find medicine. Some thick Georgia kudzu finally makes an appearance, strong enough to be a supporting character. Carol’s Den Mother has become a cold-blooded killer. Rick’s gone back to his Questions, bringing in two new strangers, before bailing on them, and later voting Carol off the island.

Tyrese and Michonne do a little yard work. Michonne is starting to sound a lot like Yoda. Rick’s Gang splits up and I actually like it. Bob (so, that’s his name) reveals his alcohol addiction. And everyone has to learn how to let go

Internment – 11/10
With Carol’s banishment, has the Ricktocracy returned?

Hershel and Glenn are in the Sick Wing and it’s killing Maggie to be away from them. Hershel knows something big is about to happen, he just doesn’t know what. Apparently, this is an all-Hershel-all-the-.time episode

the sickos are getting killed off with an epidemic. The fence is down, that means it’s father-son bonding time. This episode dragged a bit, then gets fast-forward action with a couple of key battles. Michonne and Hershel go on a road trip — I smell spin-off! The Governor makes a last-second cameo appearance.

Live Bait – 11/17 – #WithFriendsLikeThese
Flashing back from last season, Woodbury in shambles, The Governor is homeless and suffering from trauma. Using the pseudonym Brian Heriot and looking like a hippie, he’s naively taken in by a family of survivors (their kindness is their weakness). This group is effective, even talking The Governor into running honey-do missions for them.

As a shell of his former self, The Governor has fallen onto very dark times. Apparently, he destroyed Woodbury instead of allowing anyone else live there.
But playing backgammon with the little girl brings The Governor’s mojo back… and then he seduces another young lady into bed. The suspension of disbelief in killing the undead in this episode is astronomical and in the end someone from last season makes a surprise cameo (Martinez). That’s two episodes in a row, now.

Dead Weight – 11/24 – #MeetTheNewBoss
Apparently, this version of The Governor has inexplicably become a Family Guy overnight (I don’t like it). After Martinez mysteriously appears and saves his group’s life, he takes “Brian” and his family into their camp.

When The Governor is told, “Your turn,” I immediately knew he was about to make a move. One more person unknowingly trusts The Governor, whose cool and calculating self is returning. The Governor has officially returned, now that he’s taken over camp (as his techno music reminds the audience).

Seeing mutilated corpses littered around the nearby area, seems as if the filmmakers were reenacting the movie, Se7en.

Too Far Gone – 12/1 – #PrisonShowdown – Mid-Season Finale
I can’t believe Bad Ass Michonne got overtaken so easily by The Governor during her road trip. Back at The Prison, the sickly Sasha puts the moves on Alcoholic Bob, who turns down her advances.

“Brian” plans to barter Hershel and Michonne peacefully, in order to take over The Prison (how could any fan believe that?). Now that The Governor has a militia, he’s also got a tank… and a Tank Girl!

Listening in on Rick’s Gang inside The Prison, glad to know there’s an official Bug Out Plan for the group. The lying games and duplicity of The Governor proves too much and Hershel’s sacrifice starts an all-out war, in which nobody is the winner. The bus with kids and elderly leaves the fighters and then there’s kids with guns (Carol’s influence lingers). Michonne basically gets her revenge and another tank bites the dust. The Governor gets sliced, shot and eaten by biters.
The episodes ends with everyone splitting up, going in different directions.

Building up to the Season Four Mid-Season Finale was a little slow moving, but it eventually hit a faster pace. The show feels like Season Four is going in another direction — neither good, nor bad — focusing on smaller groups of characters per episode. A couple of episodes in a row without Rick must be a record.
I like the lesbian soldier Alisha, but it’s too bad she was expendable and never got a larger storyline.

According to creator Robert Kirkman, the last half of the season is going to be super intense, because Rick’s Gang has lost Hershel, The Prison and each other. They’re split up (some are still sick) and attempting to survive on their own. I fully expect to see multiple episodes from the vantage point of different characters and how they might unite by the end of the season.

Strength: The show (and Rick’s Gang) is moving in a new direction.
Weakness: Sometimes storyline drags before hitting fast forward.
WTF Moment: Glenn and Tyrese are both being left in the background for far too long. It’s time to showcase them both… before one of them bites the dust.

Notable Quotes:
– “I’m a pirate.”
– “We have fruit.”
– “Don’t throw that at me.”
– “Don’t look back. Just keep walking.”
– “You better watch your ass, One-Eye Bri.”
– “A sad soul can kill quicker than a germ.”
– “Anger makes you stupid. Stupid gets you killed.”
– “People don’t need to see it… but I wanted to.”
– “You shoot, or you run. Don’t let ’em get close.”
– “People believe what they want to believe. Everybody loves a hero.”
– “You can’t think forever. Sooner or later, you have to make a move.”
– “Nobody ever mentioned just how boring the end of the world was going to be.”
– “I hereby declare we have spaghetti Tuesday and Wednesday. First we have to find some spaghetti.”