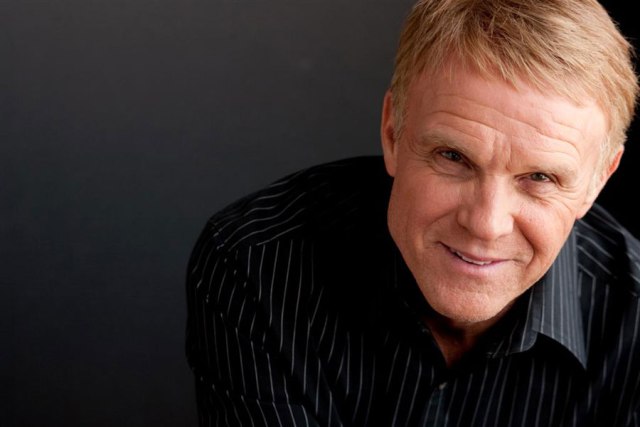 Per Matt
Master Chief hopes to finish the fight.

But Steve Downes, the actor behind Halo‘s famous Spartan super-soldier, hopes to continue the role of one of the most popular XBOX characters of all time. Recently, at the Geek Media Expo outside Nashville, TN, Mr. Downes discussed voicing the pivotal role as a side job, continuing the Halo franchise while changing production companies and expanding upon the role of the famous-but-faceless fighter into a new video-game trilogy.

What were some of the differences in Master Chief’s character, from the original trilogy to Halo 4?
– “First of all, it was really exciting for me, where they took the character. As we developed, through the series, it’s what I always hoped would happen. There’s a bigger story with Master Chief than what was being told in the games. Each game, it got a little bigger, but he was still a man of few words and the relationship between he and Cortana was one that you sort of had to use your imagination with. When 343 took over Halo 4, they made it apparent to me, early on, that we were going to develop that story. The whole process was different for me.”

Was working on Halo 4 a different experience than working on the original trilogy?
– “When we did the first three games — and the little stuff that I did on Reach — I worked at a studio in Chicago. It was a very isolating experience, as most voice over is. I mean, you walk into a little booth — the size of a phone booth — you do your lines and somebody will say, ‘That’s great. Do it again.’ With Halo 4, it was a completely different thing. It was the first time I ever got a script in advance. Most of the time, I’d get the script the day I went in to do the reads.”

“This time, because the story was going to be more involved, it was going to require more from me, from an emotional standpoint. So, the only way that would really work is for me to be in touch with the writers, early on and for Jen Taylor and I to work together — which we had never done. I had never met Jen until about two years ago. We met at the 10th anniversary of Halo: Combat Evolved at the big Halo fest, up in Seattle. It was the first time we’d ever laid eyes on each other. Since then, we’ve become good friends and it’s been a great relationship. But, for us to be able to really do what was required for Halo 4, we really needed to be together, in the same room, doing it at the same time. Doing it that way was a very exciting and very emotional experience for me.”

“There were times like the big scene at the end (SPOILER ALERT) where she dies (END SPOILER ALERT)… that was very emotional scene for me to do. I remember when we did it, on the other side of the glass, you have the director, the producer, a couple of writers and some other people from 343 with Jen and I in the sound booth. Then they had some people filming. There’s a Making Of video that shows us recording our lines. I asked that all those people leave and we just had the minimal amount of people in the studio at the time, because I was going to have to pull some things out that weren’t necessarily comfortable. That was what Master Chief was going through. He was touching some emotions that he either didn’t know that he had or was not comfortable showing.”

“In the first three games, emotion didn’t figure into it, with him. But in the last way, it did, in a big way. I’m guessing, it’s going to proceed further in that direction, as we get into Halo 5.” 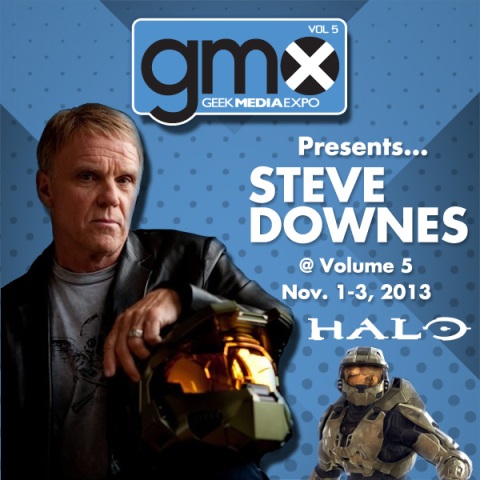 Moving from Bungie to 343 Industries, what kind of differences did you notice in changing production studios?
– “I get asked that a lot. Look, if it wasn’t for Bungie — and particularly Marty O’Donnell, who cast the voices in and wrote all the music — I wouldn’t be sitting here. He is my contact. When we first started, Bungie was still located in Chicago, where I’m at. I owe a debt of gratitude to him and to the entire Bungie crew, who I could not possibly repay.”

“Having said that, Bungie got to a point where they wanted to move on. That’s why they left Halo behind. So, at that point, you’re working with an entirely new crew and you’re forging new relationships. Right away, what put me at ease was that these people have a passion for the game that goes beyond the financial implications of it. Obviously, Halo is a money maker.”

“In my opinion, the reason why it’s a moneymaker is because with both Bungie and 343, the people who are caretakers of the franchise have a love for it, that goes beyond its commercial success. That was comforting to me, because you could run into a situation where all of a sudden, you start seeing Master Chief on the back of cereal boxes and there’s not a real concern for the franchise going forward.”

“With every single person I was working with on Halo, they had a love for it. These guys are all gamers. They’re all into it. They would be doing this, whether they were getting paid for it or not. That makes my job that much easier because there’s a trust there. Once they trusted me and I trusted them, the rest became easy.”

Moving away from a strong-but-silent character, were you ever hesitant in the change?
– “No. I couldn’t wait. That’s where I, personally, envisioned this going. If you had kept it the way it was, it would’ve gotten stale. You can only go so far with, ‘I need a weapon.’ To me, it was an obvious step, but you never know… especially with a new group coming in and taking it over. It was exciting for me, as an actor. What actor doesn’t want more lines? But it’s not about quantity, it’s about quality.”

“When I would do Halo 1, 2 and 3, at maximum, it was a two-day job. I’m talking about a couple hours a day and maybe a third day that I call the ‘Death Sessions,’ where Master Chief gets killed. You have to have a noise for that. We would do a couple of hours of me screaming, dying, getting injured and injuring other people. It was a bit grueling.”

“When we went in to do Halo 4, we were doing eight-hour-a-day sessions, which is somewhat unheard of, in voice over. We would literally be in there all day long for three or four days, then I’d come back in a month and we’d do another three or four days and then there’d pick-ups, along the way. The clock’s ticking, the whole time. I remember the day I went in to do a session and they actually announced the release date. Once that’s out, the pressure was on to get it done and get it done right.”

“So, to be able to flesh him out that way was a tremendous experience and one I hope to expand upon in the not-too-distant future.” 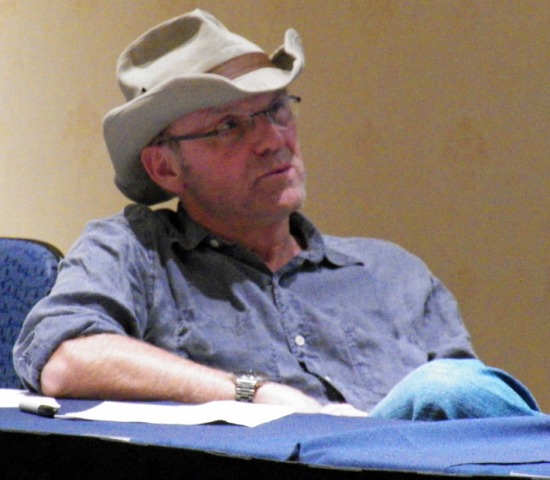 What led you to do voice-over work?
– “Growing up, I was a music junkie. I loved rock ‘n roll from the time The Beatles came out and wanted to figure out some way to stay close to that. So, when I was in college, I played drums in a band and we were getting fairly good, at the time. It was getting to the point where we had to make the decision: Were we going to pursue this seriously? It was what my heart wanted to do… the pitfalls were too numerous to mention. The band broke up, we shifted gears and I got into radio at the college station. My goal was to become a record producer. Radio might be a great entree into that and it allowed me to stay close to my first love: the music.”

“My ego was having too much fun, doing the radio thing, and I stayed with it. From that, voice-over work oftentimes can be a natural extension. When I was out in LA, I started producing commercials for concert promoters and record companies. I would do the whole production part and voice it. That was a lot of fun, but it was a little limiting. I got better at the voice-over part than the producing part, so I got an agent and started doing commercial voice-over work. And then in ’97, I moved to Chicago and continued that and the fortituous part was that Bungie happened to be there and Marty was a fan of mine, from the radio. He thought I had the right voice for this character they were developing. I often tell people it’s funny how life takes turns you don’t expect. To say that I did not expect this, would be an understatement.”

Why do you think Halo is a successful franchise?
– “The story. There’s a lot of great games out there that are just as impressive technically and visually. Where it is unique, behind the shooter part is the story. It’s a continuing story — which I credit to the Bungie guys and now the 343 guys — which has been kept intact. What other video game has books, graphic novels and all these other ancillary things beyond the game? That has to be there because there is a story to tell and people get into the story. That’s what keeps people attached to it.”

What are some current projects you’re working on?
– “I do a radio show in Chicago on the classic-rock station called The Drive — that’s my day job, which I do five days a week. I do the morning show, there. That occupies quite a bit of my time. That and I do commercial voice over and cons like this. That’s pretty much my life, on a day-to-day basis.”

“As I’m sure you know, we’re in between Halos at the moment. There’s very little I can tell you about Halo 5, quite frankly, because I know very little about it. I’m sort of on a need-to-know basis with 343 and right now I don’t need to know. Most of what I know; you know. Of course, there’s a new XBOX coming out — XBOX One. I’ve got to believe there will be a Halo to follow… but I’m not working on anything, with them, at the moment. I’m pretty sure there will be something in the near future.”

Which conventions will you be headed to next?
– “My next one is Sac-Con in Sacramento in January.”