Shudder’s Scare Package is Yet Another Anthology From the Service, But is it Any Good?

Horror anthology movies have a hallowed space in my heart. They are typically hit or miss in quality, story and everything else that makes a great horror film. They can creep you out one minute, then have you laughing the next. If you are looking for cameos from iconic actors in the genre, you are probably going to find them showing up to die. Anthologies offer something for everyone.

The biggest issue horror anthology films take is when they focus on one aspect too much. Many tend to focus more on the humor aspect than the horror side. While it is fun to see filmmakers take jabs at some of the stereotypes brought on by slasher movies, too much of a good thing is not a good thing. It’s like adding too much salt to a stew: A pinch or two works, but pouring in the whole shaker will make it nauseating to taste. Conversely, some anthologies focus on the blood and gore, leaving humor by the wayside. To make a truly good horror anthology, you need to have breaks in the suspense and thrills with moments of levity. While the stories are different, they all are related, and that relationship also has to be maintained throughout.

Back when I was growing up, horror anthology films were not as prevalent as they are today. But we did have anthology TV shows. I remember when my family got cable TV and HBO, sitting in the dark watching Tales From the Crypt. I loved how each episode was its own single story, all connected by a decrepit host, The Cryptkeeper, whose maniacal laugh haunts me to this day (Seriously, if you haven’t ever seen Tales From The Crypt, do yourself a favor and Google it right now!).

On basic cable, you had other horror anthologies like Monsters and Tales From the Darkside. Even major horror films lent their names to shows, like Friday the 13th: The Series and Freddy’s Nightmares. Both had names tied to iconic films, but only Freddy’s Nightmares actually featured anyone from the films, in which the show was named. Friday the 13th: The Series took the route of being less anthology and more dramatic horror series, since each episode loosely tied in with each other, more than normal anthologies do. The ’80s and ’90s were chock-full of anthology films and shows.

The streaming service Shudder recently released a new anthology film on their network entitled Scare Package. The cover art looked very intriguing, as it reminded me of my days working at a video rental store (they are still around, folks, but hard to find). All the nostalgia brought on by the poster and the idea of seeing a new horror anthology had me chomping at the bit. So, I sat down, turned off my computer (something I rarely do) and sat back to enjoy the show. 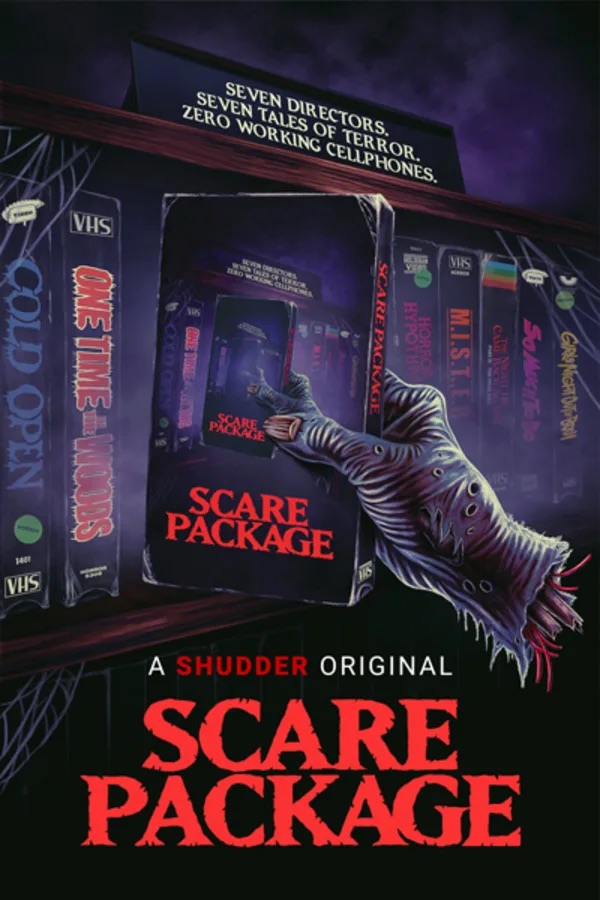 Scare Package is broken up into seven different segments, but with each tied together by the conversations being held at a video rental store, called Rad Chad’s Horror Emporium. Store owner Chad (Jeremy King) is a horror-obsessed nerd who is training his newest employee, Hawn (Hawn Tran), an equally focused horror buff. Loyal customer Sam (Byron Brown) brings up horror stories and movies he has seen, testing the true extent of the two aficionados’ knowledge. Each segment tells their own story, usually with campy twists and gore out the wazoo. But the night at the video store turns dark, and Chad soon finds himself in the middle of a true horror story.

I built up Scare Package in my head to be an amazing film, even though all I had seen before watching it was its cover art. That tends to be a bad thing for me when it comes to reviews, as I let an external bias taint my initial expectations of the film. I try to go in with low expectations. Most movies hit higher than this level. Some fail miserably.

Scare Package did not fail at all. In fact, even with my low expectations, it hit an amazing high mark. The comedy in the film, while over the top in some parts, fit because the characters were trying to “one up” each other in their stories. The special effects and makeup were good, not great, which also worked as the stories were meant to come from cheap horror flicks. And all the writers were able to find the correct blend of comedy, action, suspense and gore.

Compared to other horror anthology films, Scare Package holds its own. While others like Trick Or Treat and the Creepshow series flaunted several well-known actors, Scare Package only provided one notable cameo in Joe Bob Briggs (not surprising, due to Joe Bob Briggs having a show on Shudder already). That is the only detracting factor in this film, compared to other horror comedies, and it is so small it is almost not worth noting.

With COVID-19 still keeping many of us inside, finding quality movies is not easy. Thankfully, Shudder has made Scare Package a five-star film. Shudder is a must-have subscription service for any fan of horror. Take my advice and start a membership today, if only to watch Scare Package. It’s well worth the price of the subscription alone.