Here Come the Mummies Get Funky for Halloween 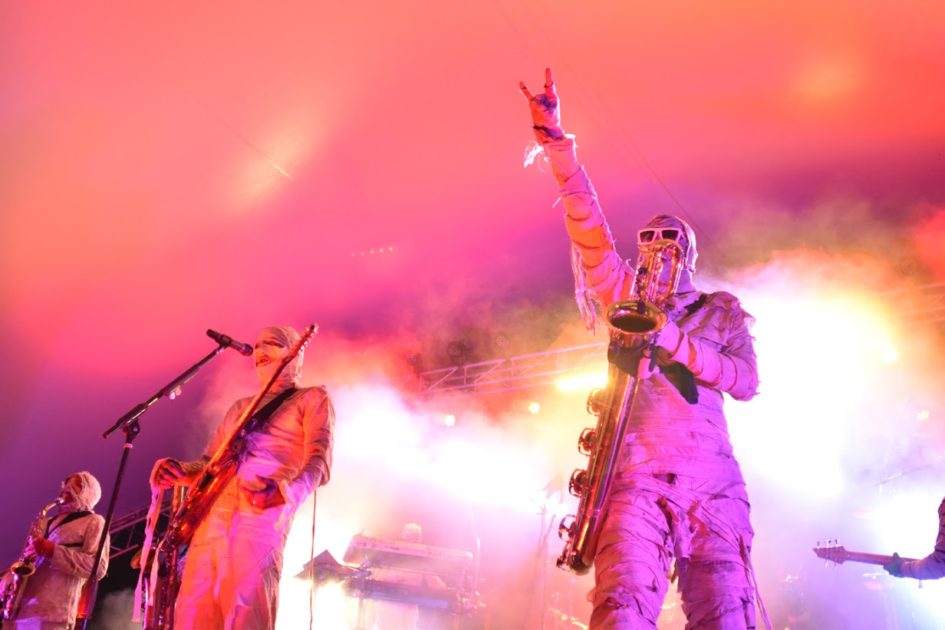 Per Matt
Marathon Music Works will definitely be getting funky as it hosts Paranormal Rocktivity, featuring Here Come the Mummies and DJ Johny Jackson’s Ghoul Satisfaction for a Halloween-themed event this weekend.

Sponsored by Lightning 100, the concert will take place on Saturday, October 28 and will highlight “Terrifying Funk from Beyond the Grave.” But before the main event, there will be even more festivities taking place at Marathon Village. The rejuvenated Nashville Zombie Walk will wind up at the area in Marathon Village and there will be Zombie Walk After Party festivities taking place that lead up to the concert, which will host a costume contest for its attendees.

First of all, please give the background from your names, Midnight and Cass.

– Your band is well known for making grand entrances onto the stage. Did either of you perform in marching band in another life?

– HCTM seems to be synonymous with Halloween concerts. What does it mean for the band to perform in front of a hometown crowd a few days before the holiday?

– What does Paranormal Rocktivity mean to you?

– This year, the Nashville Zombie Walk leads up to your concert. What kind of past encounters, good or bad, have you had with Zombies?

– What kind of surprises can you hint at for this year’s show? Will you debut any new instruments or songs?

– Fans have been known to wear elaborate costumes at your concerts. Have you ever gotten any costume tips from them throughout the years?

– What is “Terrifying Funk from Beyond the Grave?” Will it reveal itself at the concert?