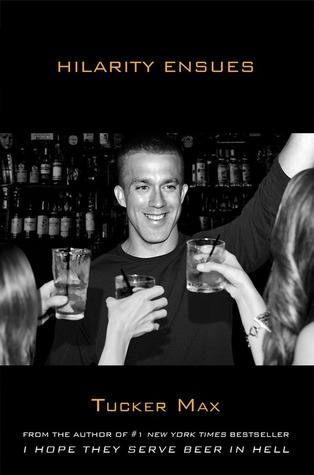 Per Matt
Fraternity + satire = fratire, the celebration of a bro culture.

This politically incorrect genre was created in part by Tucker Max, who made a name for himself with his first book, I Hope They Serve Beer in Hell. Continuing his tales of drunken debauchery and outrageous antics, Hilarity Ensues is his third and final book within the fratire genre that feature his volatile personality.

Basically, it’s a book detailing stories of barhopping and womanizing… and they’re incredibly humorous, not to mention addicting. Just know this: If there’s anything that will make him laugh for more than 15 seconds, no matter how ridiculous, he will do it.

There are many short stories detailing the outrageousness that is Tucker Max within this book. He’s built a wildly popular reputation for himself, not because he’s a great writer, but because he’s a brutally honest storyteller who isn’t self aware and makes a point to embarrass himself (along with everybody else) for a good laugh.

The easiest way to sum up his character: Things always seem to work out for him because he does whatever he wants and doesn’t care about the consequences.

Several Highlights of Hilarity Ensues:
– Max basically skipped all of his second-year classes at Duke Law School to party in Cancun for six full weeks without his professors realizing he was gone. Because of his antics, the American Bar Association changed their attendance rules for ALL law schools. This is commonly known as The Tucker Max Rule.

– After receiving a message from the producers of The Deadliest Catch, he was invited to party with the entire crew of his favorite TV show in Alaska.

– The absolute highlight is reading about his relationship and misadventures with Miss Vermont Katy Johnson, and the resulting lawsuit she filed against him (which inadvertently gave him so much more publicity).

– The remainder of the book is filled with ridiculous sexting samples gone wrong (which last too long), raunchy law-school stories, weddings and bachelor parties.

I had previously read I Hope They Serve Beer in Hell a while ago, but somehow I missed his second book, Assholes Finish First (at some unknown future date I’ll be picking it up). The writing style of Tucker Max is blunt and straightforward. It’s not necessarily filled with proper grammar or spelling, but it’s relatable.

After 15 years of drunken excess and sexual revelry, Tucker Max has wrapped up this chapter of his life, ending his fratire days as a writer. While his future endeavors are unclear, Max will focus his life and writings on other things. I will be very interested in finding out what they may be.

Strength: He calls things as he sees them, usually in a drunken blur.
Weakness: Grammar and spelling errors don’t deter from this joyride.
WTF Moment: Demented cartoons drawn by a former beauty-pageant winner may do more harm than help for young readers.

Notable Quotes:
– “I need something to drown her disappointment in me.”
– “The language of drunken whore-logic is international.”
– “If I must face death to get drunk, I willingly accept the challenge.”
– “It was like a flash-bang grenade of debauchery and bad decisions.”
– “Sometimes I can be a pathetic hump donkey, and this was one of those times.”
– “I woke up every morning sending AMBER Alerts for my dignity… and I was getting paid for it.”