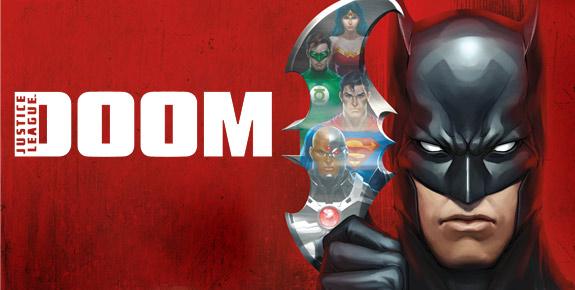 What’s a four-letter word that’s been painfully missing from so many DC animated movies, ever since Justice League Unlimited was cancelled on Cartoon Network?

Doom… as in the Legion of Doom!

Justice League: Doom pays an homage to the old-school cartoon, Challenge of the Super Friends, which originated the all-star cast of supervillains from the DC Universe. I can never get enough great villains in all forms of pop culture, but whenever they act together as a group, it’s an instant classic!

Preparing for this movie, I watched Superman/Batman: Apocalypse, before realizing I’d never seen Doom before. In this direct-to-video movie, the Legion of Doom is reformed, this time led by Vandal Savage. Each member has a personal vendetta against one member of The Justice League and systematically, each villain takes advantage of the heroes’ weaknesses and defeats them using information stolen from Bruce Wayne’s batcomputer.

Vandal Savage recites his backstory (he’s immortal) and details his plans for world domination. Against all odds, Batman survives his assault and eventually rescues his teammates. Together, they battle the baddies, once again. This time, the outcome is much different.

Batman’s always been the bad ass of the Justice League and genuinely gets to shine when he’s in charge of the group. However, by the end of the movie, he’s quit the group. I’m not a fan of the movie’s conclusion, but it does lead up to rebooting the animated series, which pairs up with the comic’s reboot, The New 52.

This movie featured a complex storyline written by Dwayne McDuffie, who unexpectedly passed away not long after completing his script. I’ve been a fan of Mr. McDuffie’s writing for a long time. He has always understood the characters and events of the DC Universe and wrote with a style that appealed to all comic-book fans, often featuring mature themes. In fact, that is the main reason why I’ve enjoyed so many of the DC animated movies. He will definitely be missed.

I really enjoyed Nathan Fillion’s Hal Jordan, but Kevin Conroy and Tim Daly truly represent the greatness of this long-running animated series and subsequently, direct-to-video movie franchise. Sadly, the voice actors will no longer be voicing Batman and Superman (along with their alter egos) together.

As of this writing, this is Daly’s final performance as Clark Kent and Superman. While Batman and Superman are totally opposite characters, both actors portraying their respective characters worked well off each other’s performance. In my mind, Daly’s portrayal of the Man of Steel will always be the first one to pop into my mind, whenever Superman is mentioned. I really hope there will be another opportunity down the line for both actors to team up, once again, for all-time’s sake.

Notable Quotes:
– “Lots of women say that.”
– “I call this my hostage box.”
– “I am older than the human race.”
– “Late night playing cards, Master Bruce?”
– “That bracelet trick always impresses me.”
– “I know more than a little about arrogance.”
– “When we fought before, I broke the Bat. Today, I break the man.”
– “Since Dad passed, I’m the world’s ranking expert in multi-dimensional interface.”