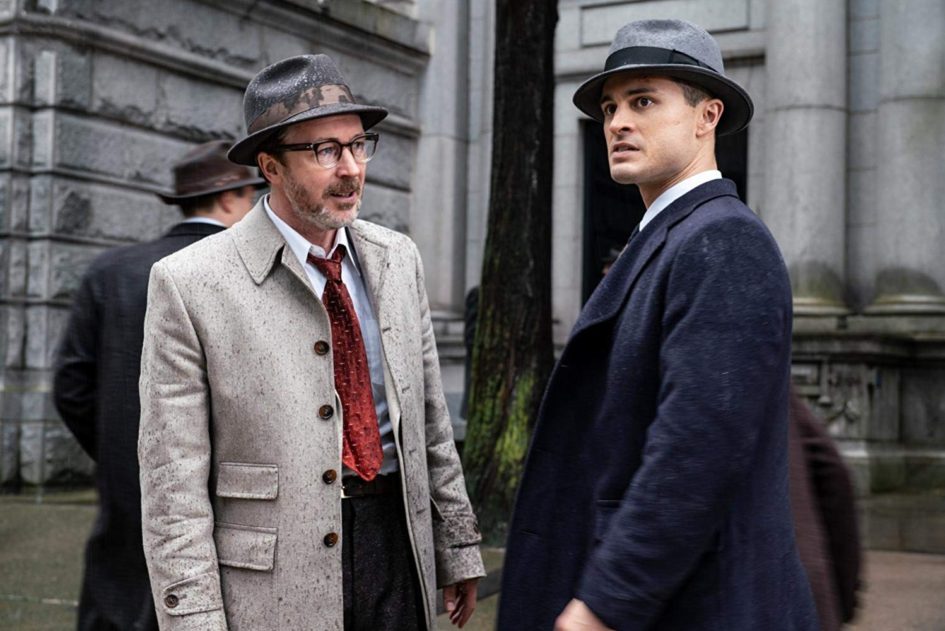 The truth is revealed to Aidan Gillen and Michael Malarkey in the Project Blue Book season finale. Photo Courtesy: © 2019 History

Some have described Project Blue Book as Mad Men meets The X-Files, but I think a more appropriate description would be an old-school version of The X-Files: characters investigating strange phenomena that’s based, in part, on real-life events. That description could help explain how the show, airing on History, has retained 80 percent of its live-plus-three-day audience since January 8th, totaling 2.8 million viewers.

Season 1 recently wrapped its 10 paranormal episodes and another 10 episodes have already been ordered for Season 2. I’m pretty stoked to see what happens next for Dr. J. Allen Hynek (played by Aiden Gillen) and Captain Michael Quinn (Michael Malarky), as they debunk strange supernatural events with some outrageous theories, often overlooking plenty of proof to the contrary. Sometimes they are simply pawns of their superiors, sometimes other military branches have the real answers, all the while hoping the duo will unearth a better scientific cover story and still other times, their discoveries will fall onto deaf ears.

The production quality is terrific and the storytelling is fine, but the best portion of each episode is shown at the very end, when actual pictures and facts about the episode’s “true story” elements are on display. It’s clear that certain portions of the storyline have been embellished for the small screen, with the most obvious being the naïve housewife and her new “friend,” who turns out to be an undercover Russian spy, which feels incredibly out of place here. While the Red Scare was real, the extraterrestrial threats never really get the full attention of our main characters, as an ongoing governmental conspiracy is the main focus of the series’ mythology, which often feels forced. How can I like one part of this series so much, yet despise with all my might another element of it?

Fear of the unknown should be front and center for these characters instead of a morbid sense of paranoia (the Russians always get blamed!). Michael Imperioli’s appearance as a Russian spy-turned-double agent was a pleasant surprise, as I haven’t seen him too much ever since The Sopranos wrapped. It’ll be interesting to see if his character was a one-shot or if he actually plays a larger role in the grand scheme of the second season.

Blue Book is at its best when episodes have been firmly based on fact, as the truth can be stranger than fiction. Seeing soldiers suffering the psychological effects of war felt real here, not usually something that’s explored along with unknown phenomena. “Operation Paperclip” was my favorite episode, depicting  Werner von Braun and the early days of America’s space program… then, there was Nazi propaganda, an unidentified flying object, crop circles and little green men. There were so many conspiracies tied into one storyline, it was like an episode of Ancient Aliens hyped up on caffeine, after chugging an entire case of Jolt Cola. It was a little ridiculous, to say the least, but depicting the early days of NASA was intriguing, if not totally believable.

In real life, Dr. Hynek explained away UFOs as a “misinterpretation of conventional objects,” hoaxers, mental illness and mass hysteria, eventually changing his disposition from skeptic to believer. Along those lines, there’s the requisite Deep Throat character in this show that moves the story along, also qualifying as a Men in Black role (or shown here as the Men in Hats).

Hynek rose to prominence with the publication of his book, The UFO Experience: A Scientific Inquiry, in which he fully defines the different kinds of close encounters. There’s plenty of speculation tied to the paranormal in this series, but I’d really like to see more of the scientific aspects he employed, while being a college professor in real life. For years, the government denied Project Blue Book actually existed, before eventually shutting down the program, which makes watching this series even more intriguing, as the Pentagon secretly opened the Advanced Aerospace Threat Identification Program years later, as another attempt to explore unexplained aerial phenomena in order to attain answers (Government Revelations Gives Proof That The Truth is Out There?).

“There is nothing new in this world, except the history you do not know.”

Hopefully, History’s Project Blue Book will eventually explore some of the history we did not previously know (or at least that which has been covered up for years) in Season 2.