The Passage Opens Up the Vampire Apocalypse 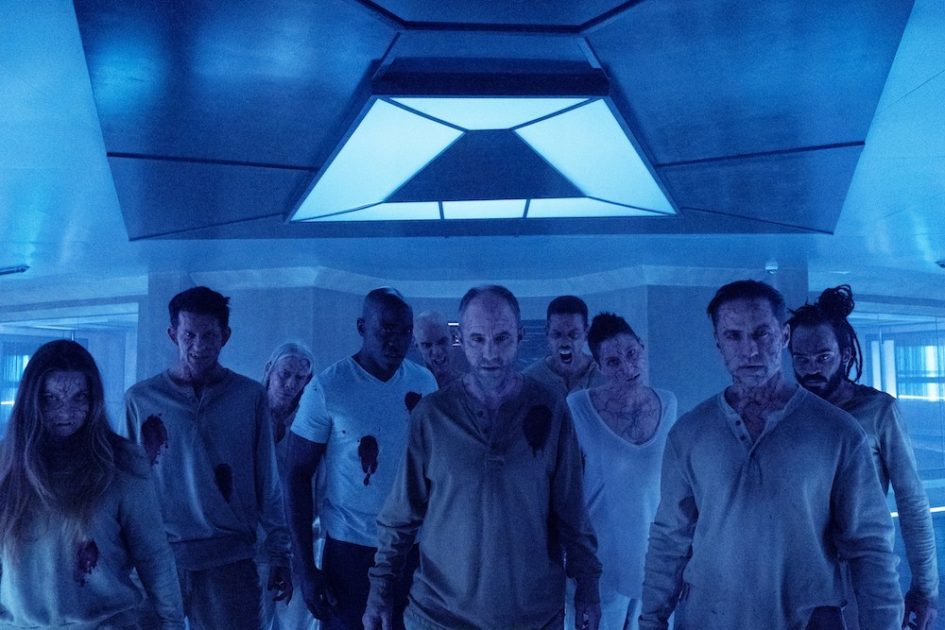 The special two-hour “Stay in the Light / Last Lesson” season finale episode of THE PASSAGE proved that big changes are in store for the show. CR: Erika Doss / FOX.

Survival horror mode was fully engaged in The Passage with the two-hour season finale, “Stay in the Light/Last Lesson.” The closing moments of the first season opened up a whole new world for the show, as a 97-year time jump jettisoned the storyline forward to a dystopian future where the Vampire Apocalypse has practically wiped out the human race. But there is some hope for humanity and for fans of the series, as a renewal for Season 2 is far from imminent.

As Season 1 wound down, Project Noah has had few successes in creating a cure to the quickly spreading bird flu pandemic. In developing an antidote on death-row inmates, the previous 11 attempts were unsuccessful until a young girl reveals positive results. Amy Bellafonte may be humanity’s savior, if only she can survive the ordeal and not turn into a bloodthirsty monster. But first, she must survive the jailbreak of the virals (don’t call these savage, immortal killers “vampires”), as they escape their prison and unleash an undead outbreak upon humanity. At the conclusion, nearly 100 years have passed, yet Amy (Saniyya Sidney) has barely aged — one of the effects of the antidote. The CDC is no longer functioning, the United States has been bombed in hopes of containing the problem and the future looks bleak for everyone involved. But there is one fortress where a community has gathered and prospered… the Colony.

Throughout its first season, The Passage built up a complicated relationship with its main characters. Brad Wolgast (Mark-Paul Gosselaar) has transitioned from being a bad guy, bringing in convicted killers and falsely offering them hope for a brighter future, to a parental role with Amy, caring for her as her protector and father figure. Clark Richards (Vincent Piazza) went from the hard-ass head of security to a sympathetic love interest for inmate Shauna Babcock (Brianne Howey). And then there’s Dr. Tim Fanning (Jamie McShane), who’s turned the tables as the Big Bad against his former colleague, Dr. Jonas Lear (Henry Ian Cusick), who hopes for redemption. Each of these characters, along with Wolgast’s on-again-off-again wife, Dr. Lila Kyle (Emmanuel Chriqui), have all attained immortal life in one form or another, as the antiviral serum was a success, but there wasn’t enough time to get it to the general public (and I doubt there needs to be an undead population of millions).

Apparently, author Justin Cronin’s book series, which this show is based, provided plenty of time jumps and flashbacks in order to completely tell his stories. Should The Passage get renewed for Season 2, there’s plenty of time for the filmmakers to tell what happened within the past 97 years and move the story forward into the dystopian future which these characters live. While it may look bleak, there is a glimmer of hope for Amy and her friends.

There hasn’t been a confirmation for Season 2 yet, but should it return, it could really be a boost to genre television, competing against the likes of AMC’s The Walking Dead, which has its own set of undead antagonists. While ratings have been good, fans of Cronin’s books have been doing a decent job of spreading the word about the series. It feels like this show is tailor-made for three seasons to align with the bestselling book trilogy, but the pending completion of Disney’s purchase of Fox could complicate matters. If that’s the case and it does get cancelled, hopefully the showrunner will move the series to another home in order for it to grow… Syfy or a streaming service seem like decent destinations. But let’s not put the cart before the undead horse just yet.

Now’s the time to binge watch this series! Whether you watch the episodes online, on demand or via Amazon Prime, each viewer counts in the grand scheme of renewal talks. If you like thrillers or you’re a fan of the horror genre, there’s a good chance you’ll like this show.