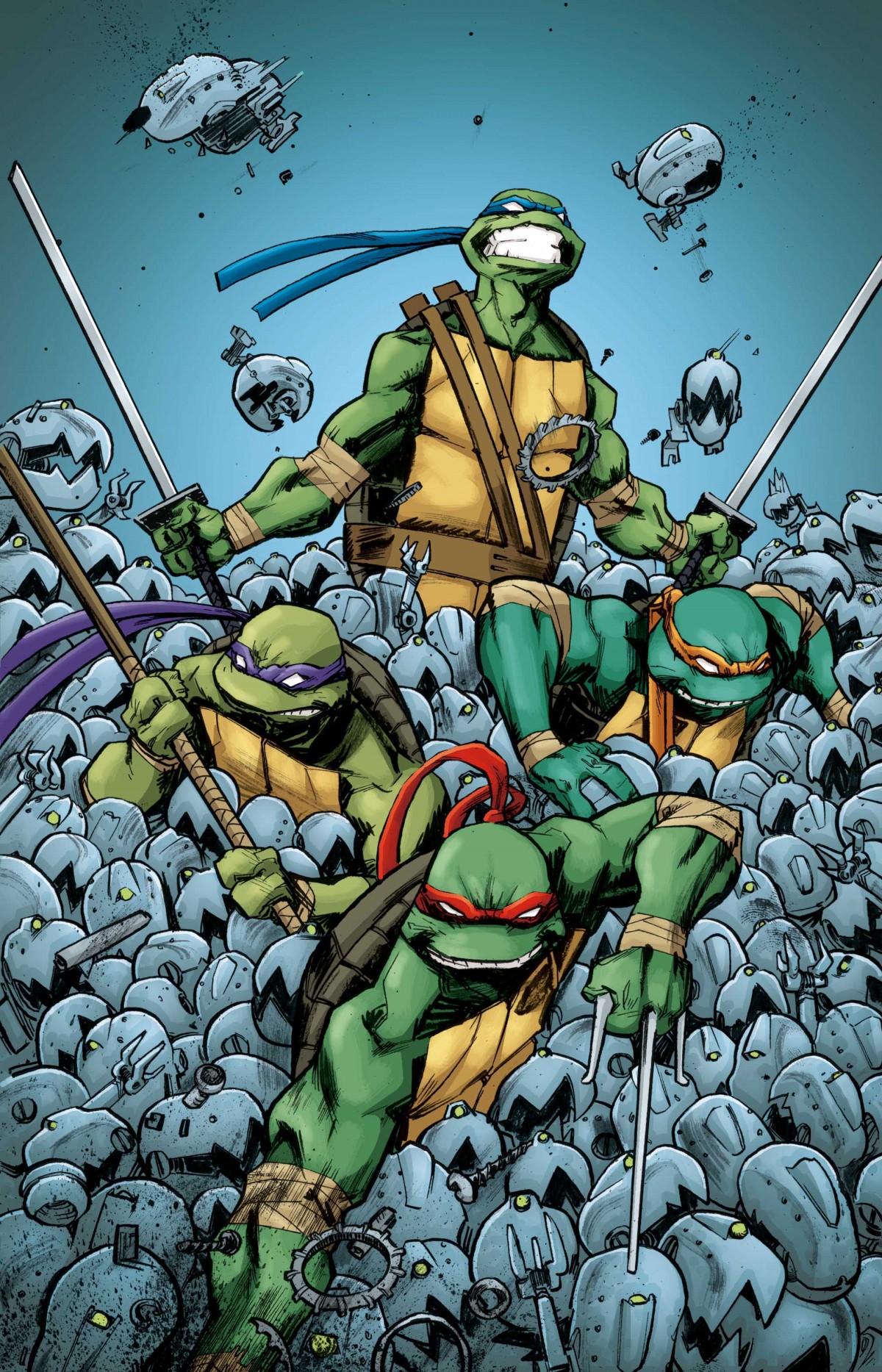 The ’80s and ’90s were possibly the greatest eras for kids growing up, in terms of televised cartoons. My personal favorite was Teenage Mutant Ninja Turtles. The show’s opening guitar riff, backed by synth chords, was just about the only thing that could get me to sit down and focus for a 30-minute period. It was the perfect cartoon for 4- to 10-year-old boys. You couldn’t say that ninjas, pizza and skateboarding wouldn’t appeal to them at that period in American pop-culture. The Turtles weren’t always kid friendly, though.

The Ninja Turtles were introduced in their comic series, published by Mirage Studios. The original publications by Creators Kevin Eastman and Peter Laird were actually pretty violent and disturbing. Some instances in the original black-and-white volumes depicted brain-shaped aliens burrowing out of victims’ stomachs, bloody and deadly duels, and a more severe side to Raphael’s wrath. Many replications have come and gone, but the most recent tales of Leonardo, Donatello, Michelangelo and Raphael mix the original comics and the cartoon in a near-perfect balance.

IDW Publishing began their Teenage Mutant Ninja Turtles series in 2011. Though the company first formed in 1999, it has become reputable for recreating popular ’80s staples, including G.I. Joe, Ghostbusters, My Little Pony and other nostalgic stories from the decade. For the Ninja Turtles series, IDW brought back Eastman to collaborate with Tom Waltz and artist Dan Duncan. The creators decided to draw inspiration from the entire compilation of TMNT’s history through its various media. They also introduce loads of new characters, while also recreating classic ones to fit into their story.

One example of IDW’s character alteration is the reimagining of Casey Jones. In previous presentations, Casey is a young adult with a deranged personality, who finds great joy in fighting off thugs. Now, he is a teenager who has college aspirations. His motivations for violence; however, come from his broken home. Dying from cancer, Casey’s mother makes him promise to take care of his father, after she is gone. In retrospect, the roles should have been reversed. Casey takes beatings from his dad on a regular basis, and though he would be perfectly capable, he never retaliates. One beating is so severe that Raphael, in a fit of rage, confronts his father and attempts to kill him, but is stopped at the final moment and given an important lesson in self-control by Master Splinter.

Much like earlier versions of the Turtles’ stories, Raphael is the lone wolf of the group. The entire IDW comics storyline begins with the other three brothers looking for Raphael when he becomes somewhat of an amnesiac and is separated shortly after their mutations take place. In homage to the original publication, Leonardo, Michelangelo and Donatello all wear red bandanas, this time to show solidarity for their long-lost brother. Though, as the plot progresses, Raphael is shown to be able to protect himself from harm, at least with the help of Casey Jones.

The origins of the Turtles and their master are somewhat similar to the original version, but are correspondingly more deliberate than inadvertent. The first comics tied in with the origins of Daredevil, when the chemical barrels that blinded Matt Murdock also mutated Splinter and his sons. In the new publications, the mutagen chemical isn’t an ambiguous substance that happens to create the turtles into anthropomorphic beings. The biochemical was actually designed to create human-like animal creatures by the scientist Baxter Stockman. Later issues reveal that it was General Krang, the brain-shaped monster from Dimension X, who funded Stockman’s experiments in order to create an army of mutants to take over the word before terraforming it with his Technodrome. Though the Turtles were never meant to be subjected to Stockman’s ooze, Shredder’s Foot Clan members steal the formula that ultimately leads to their creation. Before mutating, the team made their first enemy in the form of a hungry alley cat, which tried to eat Raphael. Moments before being dragged into a sewer drain, Splinter saves his son by biting the cat’s eye out, creating an enemy who would eventually become the mutant, Old Hob.

If one good origin story wasn’t enough for comic fans to gush over, IDW gave them two. While the Stockman ooze created the Turtles for what they are, the start of their journey began back in feudal Japan. In a past life, Hamato Yoshi was once under the command of Oroku Saki as a member of the Foot Clan. Yoshi left Saki’s command because of his ruthlessness, wanting a peaceful life. Enraged, Saki sought after him and killed his wife, while Yoshi and his four sons escaped with their lives. Soon enough, Saki tracked them down. Before their execution, Yoshi prayed that justice would be served and upon his death, reawakened as the reincarnated rat, along with his sons, the turtles. Of course, Saki, too, reawakened as the man who would become Shredder.

The Ninja Turtles’ comics goes through lots of storylines and subplots. In fact, all of the pivotal characters get their own micro series, during the duration of the IDW storyline, as a way to focus on their individual characteristics and backgrounds. It’s hard to think that any fan from any point of the TMNT franchise wouldn’t like the most recent comics. They are packed with an array of nostalgic themes and stories that ultimately any Ninja Turtles enthusiast of any age would surely love. The battles between the pages are exciting and gripping. Some outcomes are even shocking and emotional. Comics and graphic novels are no longer at the peak where they used to be, but publishers like IDW that have the vision to make once-prevalent heroes like the Teenage Mutant Ninja Turtles into something inspiring again will keep the comic-book medium alive and well for years to come.