Searching for a True Adaptation of Pride and Prejudice and Zombies 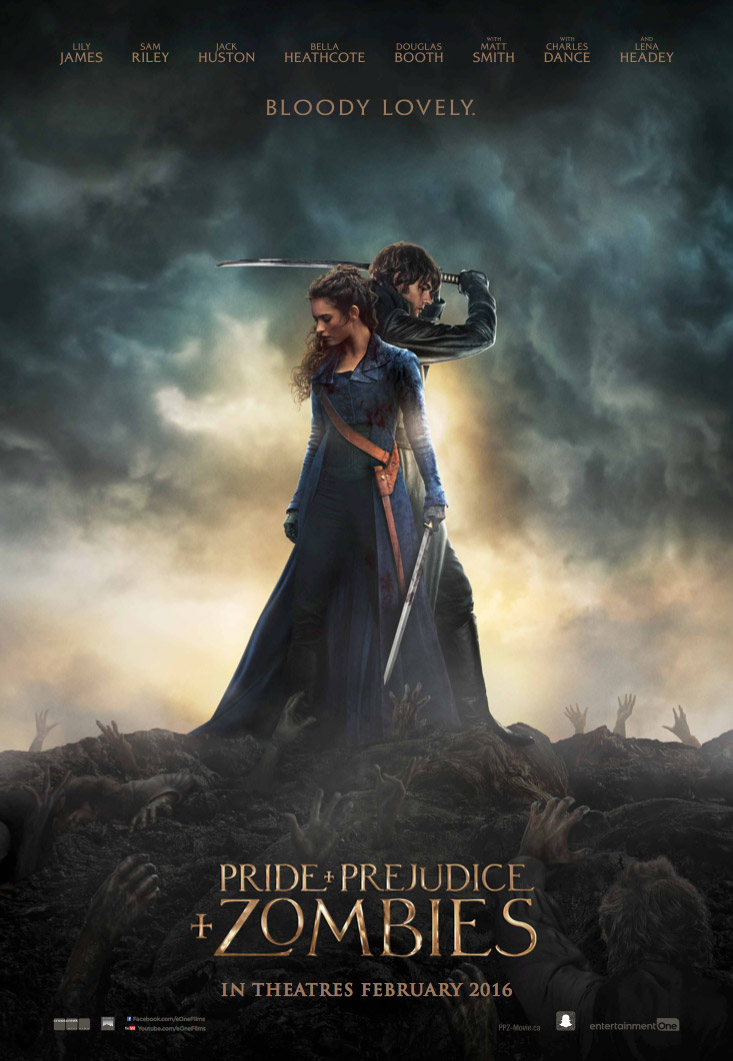 Per Matt
Much like the Zombies’ never-ending hunt for their next victims, I’ve been on a voracious, never-ending hunt for great undead literature. I’ve got a pretty good track record for finding some great books (along with a few ridiculous carcasses) along the way. While I was reading Pride and Prejudice and Zombies, by Quirk Books, for the very first time in 2009, I envisioned a grand big-screen adventure for the Bennets and now, seven years later, that adaptation is finally hitting the big screen, but what, exactly, got lost in translation? This movie is nothing like like the mash-up novel that spent more than 50 weeks on the New York Times bestseller list. So, who’s to blame?

After getting passed through three different directors and seven production companies while languishing in production hell for many years, filming for Pride and Prejudice and Zombies finally began in 2014. The story that combines classic literature with horror-genre elements was already a success in the minds of the book’s fans. In an alternate reality, during the Regency Era, a mysterious plague infects Great Britain that turns people into Zombies. Preparing for this Zombie Apocalypse, Mr. Bennet (played by Charles Dance and underused throughout the film) sent his five daughters to China for self-defense classes, where they learned martial arts and weapons-training techniques. Back in Hertfordshire (one of the remaining cities yet to be infected), citizens are oblivious to the outside world, until the undead wreck their party.

The first half of the movie feels like a tunnel-vision plan of attack by Mrs. Bennet (Sally Phillips, whose character is only tolerated in small doses, which these filmmakers didn’t quite understand), desperately trying to marry off her five daughters, at all costs. The final half felt like a totally different movie, where there were many action scenes showcasing humanity’s last stand against the undead invasion. There were so many liberties were taken with this movie, the filmmakers practically erased Jane Austen’s contributions from her own story, only keeping the names of her characters intact. Everything else seems to be the creation of Writer-Director Burr Steers. Really? Why does his watered-down version of the Jane Austen and Seth Grahame-Smith bestselling book get the big-screen treatment? I blame the seven production companies and the writer-director for ruining this adaptation. There’s just too many cooks in the kitchen.

If purists were upset at the speed of the undead in World War Z, they’ll have a field day with this movie. There’s talking Zombies, a closeted Parson Collins and the Four Horsemen of the Apocalypse that were all purely created for the big screen… and those were only a few elements I could remember off the top of my head. About the only thing this movie did right was casting Lily James as the lead character, Elizabeth Bennet. Lizzy is an incredibly powerful beacon for feminism during an otherwise unlikely time for social change.

More or less, the movie version of Pride and Prejudice and Zombies mostly focuses on the contributions of Seth Grahame-Smith, but then dramatically dumbs it down. For some reason, everything the best-selling author (who has since become a screenwriter) writes seems to be unadaptable for feature films. None of his big-screen scripts have reaped huge box-office returns, from Dark Shadows, to Abraham Lincoln: Vampire Hunter and beware the soon-to-be-released, Beetlejuice 2. This time around, though, he’s not the screenwriter for his own novel (but he should have been). Surely he would’ve done a better job than Mr. Steers. It’s unfortunate that this may be the only version of the monster mash-up masterpiece to grace the big screen. Not even a mid-credits scene that promises more Zombie-killing action in a possible sequel can cover up this low-budget embarrassment. The damage is already done. Why is it so difficult to get a true adaptation of a best-selling and beloved novel these days?