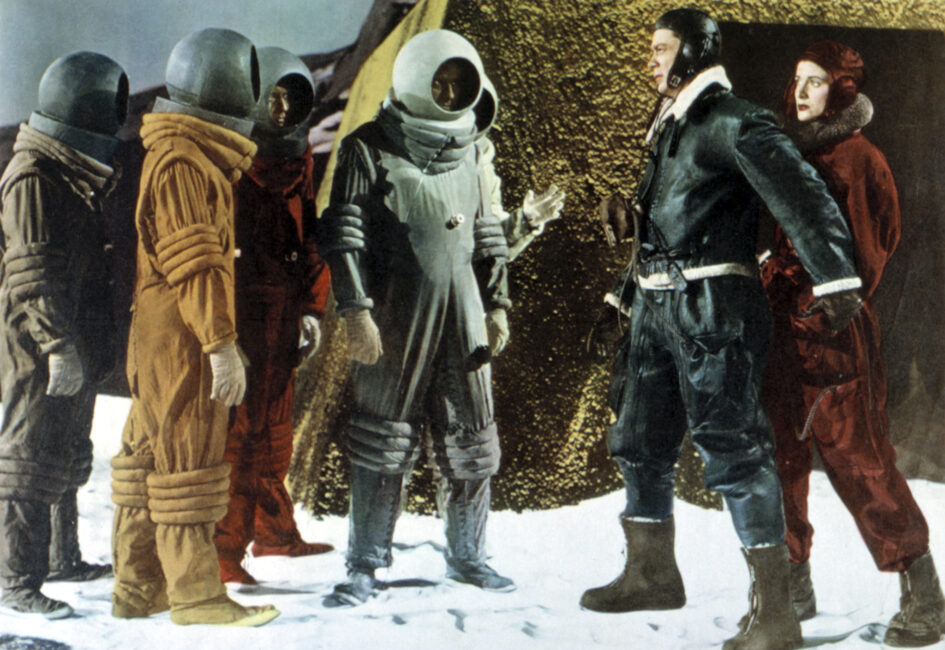 Per Matt
“Fifty years into the future!” was the tagline to the cult classic Flight to Mars. Originally released in 1951, this sci-fi gem provided ahead-of-its-time thoughts on everything from interplanetary travel to the responsible use of natural resources. Seventy years later, The Film Detective uses the necessary elbow grease to clean up the film’s original 35 mm Cinecolor negatives to release a shiny new special edition of the movie with a 4K restoration that’s a treat for science-fiction fans of all ages.

This Flight is escapist entertainment as viewed through the scope of a time capsule. From the cold open, a scientist openly imagines hoping to find life one day on the Red Planet, but also to use a telescope strong enough to examine it from our home. (It seems one of these options is currently available.) Cut to a newspaper writer (remember them?), a scholar and some scientists boarding a sleek rocket ship that they’ve designed. Forget NASA, these entrepreneurs are going on a road trip and it seems they’ll allow just about anybody onto their flight.

After traveling to Mars within 10 days (despite the actual distance being 35 to 40 million miles from Earth) and crash-landing onto the surface, they make a grand discovery: An ancient race of beings that look remarkably similar to humans have been living there for many years. Initially welcoming help, they’ve got some deadly ulterior motives hidden in plain sight!

Flight to Mars is a blend of science fiction, fact and fantasy and that’s what made the movie all the more interesting to me. I could list all of the inaccuracies that are prevalent within this story, but that seems far too daunting. I will note the loss of radio communication after only two days into their journey, the lack of weightlessness while flying in outer space and an astronaut smoking a pipe while inside the cockpit (What?!) are just a few oddities I noticed. Real-life scientists are constantly making new discoveries, which were not available while telling tales many years ago. None of these devices ruined the film, they just made me chuckle.

I’m a huge fan of movies that were filmed during the initial Space Race, as well as sci-fi movies that use strong Cold War metaphors during the growth of the Atomic Age. Flight to Mars easily fits into that first category, while also offering a glimpse of the future. Private space flight was never a remote possibility during the 1950s, as Elon Musk and Jeff Bezos have just begun an all-new space race within the 2020s, but the topic was broached many, many years earlier.

While the story takes place within a series of rooms, this Flight touts old-fashioned values and low-budget special effects… as well as beautiful Martian females who only wear skimpy skirts! The final noteworthy plot device stems from a series of antique Martian dwellings found on the planet’s surface, which heralds the ancient astronaut beliefs found on History’s Ancient Aliens…

There’s a few great supplementals included on this Blu-ray collection, including Walter Mirisch’s experiences in Hollywood, which is mandatory viewing for every cinema aficionado out there, as well as an oral history of what was happening in Hollywood while so many low-budget horror and indie films were released with similar sci-fi themes back in the day.

I really enjoyed taking this Flight to Mars, even if if was a tad antiquated. Those elements only made it more memorable.